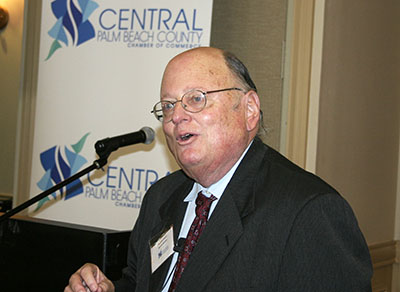 Villamil, the founder and principal of the Washington Economics Group consulting practice, said the local economy is closely tied to national and global economic conditions, as well as the Florida economy.

Florida is attracting both investors and visitors who bolster the local economy, Villamil said. Moderate economic growth in the United States overall is being offset by problems in Europe.

“It’s a big problem in regard to how they manage their economy,” he said, explaining that many of the European economies feature very large governments with large fiscal deficits that need fundamental reform. “As far as the U.S. is concerned, we are tops in economic performance, but I always say there are different gradations of hell.”

Villamil said Florida and many of its economic partners are waiting for the completion of the Panama Canal expansion.

“The ships are going to come in with their containers, and all the business that it brings in, but if you take it overall, the Palm Beach County business environment has been very positive this year,” he said.

Villamil suggested that any business in South Florida have a global perspective. “That doesn’t mean you’re exporting merchandise or doing consulting services, but at least to have a representative office somewhere, or an alliance with a foreign company that you can use to attract visitors here and attract investors here,” he said.

As an example, Villamil said that anyone in the real estate market during the downturn who had ancillary offices in Spain, Canada or Brazil probably did well because foreign investors are now buying up real estate.

He noted that a slack in the global economy has been a hedge to inflation, which has been moderate in recent years.

“Inflation is not going to bite us this year or next year,” Villamil said. “It may go up a bit, but not significantly, so I think Janet Yellen, chairwoman of the Federal Reserve, sleeps soundly at night.”

He added that Federal Reserve policies have created an excess reserve in the banking system of about $4 trillion available for lending.

“If the banks get exuberant and start lending this money out, that impact will be a multiplier, and we have an inflationary cycle,” Villamil warned. “However, we don’t see the banks becoming exuberant. In fact, they are being very credit-cautious.”

Villamil expects new mortgage lending policies to make it more difficult for potential borrowers because of the additional paperwork. He expects short-term interest rates to rise modestly in 2015, which will give anyone with excess cash a place to put their money.

Meanwhile, consumer confidence has improved modestly in Florida, as well as the nation in general. Florida has outperformed the nation in employment expansion. “The only one beating us is Texas,” he said.

Although the global economy is sluggish in general, Canada, Asia and many areas of Latin America are experiencing steady growth. “That is very positive for us,” Villamil said, adding that the major exception is Brazil, which is one of Florida’s major trade partners.

Although the national economy is recovering, it has been a fairly weak recovery.

“The consensus is about 2 percent growth this year,” Villamil said. “Every time the economy begins to crank up to the 3.5 or 4 percent range that we should be at this stage of the cycle, we pull back.”

He described the current condition as a “plow horse economy.”

“It’s an economy that keeps on going, and it bears fruit, but it’s not a racehorse,” he explained.

Villamil was appointed by President George H.W. Bush as undersecretary of commerce and economic affairs and was selected by former Florida Gov. Jeb Bush as his first director of tourism, trade and economic development. He is chairman of the Governor’s Council of Economic Advisors of Florida, was the founding dean of St. Thomas University and is a board member of Mercantil Commercebank.