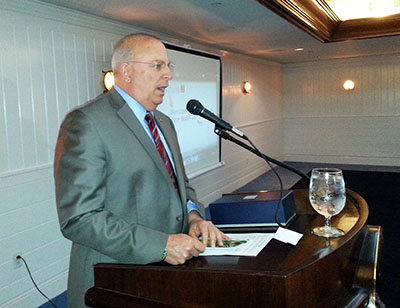 Wellington Mayor Bob Margolis gave his annual “state of the village” address Wednesday during a Wellington Chamber of Commerce luncheon at the Wanderers Club.

Margolis pointed out that his presentation was being videotaped for publication on the village’s web site. “I promise to behave for the whole presentation,” he said.

He also pointed out that due to the Sunshine Law and the fact that another council member, Howard Coates, was present at the lunch, he could not talk about any questions that might come before the council for a vote.

“Howard doesn’t know this, but I’ve offered to step out of the room and let him do the rest of the presentation,” Margolis joked.

Following a 2-minute slide show by Wellington staff on the challenges and accomplishments of the village, Margolis said the slides that made him look twice were about the amount of manure produced by horses in the village.

“I have to tell you, that’s a big issue for us,” he said. “We are in the process right now of looking for a central location in the Village of Wellington that would store the manure. The sugar corporations have said they would take all of it if we could find a central location to do that. That has been a really big issue for us over the years with our water quality and the need for the reduction of phosphates in our [runoff] water.”

Margolis pointed out handouts on the lunch tables presenting the village budget in brief. On Tuesday, the council gave final approval to a budget of $76.9 million, an increase of $2.5 million from last year, with a tax rate of 2.45 mills.

“Our millage is the lowest that it has been in years,” he said. “I have to tell you, I’ve been involved in budget reviews and reports for a number of years in the Village of Wellington, but our staff… gave us the most transparent, most frugal budget that I have ever witnessed.”

However, he added, the Palm Beach County Sheriff’s Office budget has been increased to provide better service.

“I can tell you that Capt. [Jay] Hart and the deputies, if you can meet any of our deputies on the street, they are the most qualified, most professional deputies that I’ve ever come in contact with, because our village residents deserve that,” Margolis said.

He said Hart made an interesting point during his recent annual presentation that reports of suspicious activities are up 77 percent.

“While one may think that’s not a good thing, we think that’s a great thing because we’ve been after village residents for years to say, ‘Pick up a phone and call us,’” he said. “Call the PBSO and let them know that there’s a bad feeling in the pit of your stomach that something may be happening around the community — that’s what their job is.”

He pointed out that most crimes in Wellington are committed by people coming into the village. Traffic accidents remain an issue, but Hart had told him that many of the accidents involve texting while driving.

“I’m not going to belabor all the points on our annual budget,” Margolis said. “Our annual millage rate is down, our crime is down, our parks and recreation department receives awards every year for the amount of programs and participants that we serve.”

He credited village staff with providing the best services that anybody could ask for.

“Take away the personality and base your decisions on the facts, and I think you’ll see that everything is working well in the Village of Wellington,” he said.