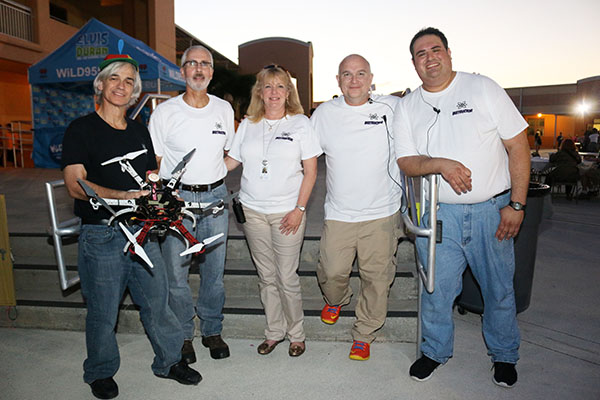 Polo Park Middle School held its second Night of Science on Tuesday, Oct. 28, where close to 1,000 students — current, former and future — attended, along with their families.

The night focused on various elements of science, technology, engineering and mathematics (known as STEM studies) throughout the school campus, in conjunction with food trucks, representatives from Wild 95.5, exhibits from the South Florida Science Center, student science fair projects, a book fair, a liquid nitrogen show and more.

“This is a great opportunity to bring the community in to showcase what our students are doing,” Clark said. “We get kids from the elementary school to come in, so they get a little understanding about middle school, and it also shows the importance of science and how we value science at this school.”

High school students, such as Sara Casey, a former Polo Park Middle School student and now a freshman at Wellington High School, happily returned to volunteer at the Night of Science.

“Last year, I volunteered as a student, and I had a blast,” Casey said. “I love the teachers, the school, the actual night — it’s so cool. All the experiments they have set up in the cafeteria are really cool.”

This year, there were 30 exhibits from the South Florida Science Center, each designed with an interactive element to educate, entertain and inform. Exhibits included learning about the Hoberman Sphere, electrical currents, bugs and more. The cafeteria held approximately 400 science fair projects from students of all grade levels, which amazed and interested parents and students alike.

Approximately 20 of those projects will be going to the district science fair, Stabler said. The Night of Science, he explained, is an event designed to generate excitement for the sciences and introduce families to the amazing things the children are accomplishing. Next year’s event will be around the same time of year, timed strategically along with the district’s science fair.

“We are striving to create future scientists,” he said. “It’s not an issue of the complexity, it’s an issue of how our responsibility, as science teachers, is to generate new scientists and new students who are interested in pursuing science, hopefully as a future.”

Learning about science, in and out of the classroom, allows students to become more aware of what goes on in the world around them, with immediately applicable knowledge.

“At least they can bring context to their daily lives and understand,” Stabler said. “When we talk about the immune system, when they listen to CNN or a news outlet, they can understand what they’re even talking about. Anything that we can do to bring that alive, is definitely what we feel is critical.”

While students are often excited about science in elementary school, that excitement tends to wane in middle school, Moore said. Strengthening scientific literacy, he explained, helps to bring that excitement back, which students can carry on to high school and beyond.

A huge crowd-pleaser was the liquid nitrogen show.

“When we think of things that are exciting, as a science teacher, we definitely try to do those things that capture the excitement of children,” Stabler said. “Liquid nitrogen has smoke, has them smashing things, making things shrink and grow… These kids can actually get to see something they definitely would not see on an average day.”

The things the students are able to see and discover at special events such as the Night of Science are things that Stabler hopes they will look back on fondly.

“We want to give them memories and have them remember that Polo Park is providing them to all of these students as something to get them excited. We want them to remember this great night,” he said. “In 30 years, when they think back to all the great things they did in school, they go, ‘Wow, we got to see liquid nitrogen and play with millipedes.’ These are the kinds of things that stick.”

The excitement of learning through science is what motivates Moore. “That’s why we got into science. We get to do chemistry,” he said. “We make things blow up. It’s fun. It’s exciting.”

Polo Park hopes such special annual events are an asset to the community. “This is a real community event,” Clark said. “We’ve got moms and dads and students here, older brothers and sisters, and it really generates a lot of excitement around the school. It’s a fabulous evening.”

Food trucks were on site, as well as representatives from Wild 95.5 to entertain, as attendees explored the stations set up on campus and shopped at the book fair.

Clark finds it exciting that so many students care to come back, even after middle school.

“That means something,” she said. “It means a lot to all of us, because they obviously had a great experience here. If it hadn’t been a good experience, they wouldn’t have come back. We enjoy seeing what they’re doing now.”