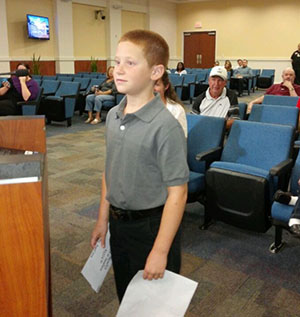 Ten-year-old Noah Norwitch received praise from the Wellington Village Council on Tuesday, along with a round of applause from the audience, for a donation of more than $3,300 of his birthday money to children in need of money to enroll in sports programs.

Norwitch is a fifth grader on the safety patrol at Binks Forest Elementary School.

His father is a pilot, and Noah explained that for the past several years he has donated his birthday money to Angel Flight Southeast, a volunteer pilot organization that helps to arrange free air transportation by private aircraft to medical facilities for people with medical needs.

“When I was 5 years old, I realized that I had lots of toys and games,” he said. “I wanted to do something that would help kids.”

Norwitch said he has asked for birthday donations from his family and friends for the past four years.

“This year, I wanted to do something different,” he said. “I’ve been swimming on the Wellington Swim Team since I was 5 years old. About four months ago, I was talking to a boy on my swim team… I had not seen this boy for a while, and I wondered where he was. He told me his parents couldn’t afford to bring him to swimming practice so he had been missing practice. I decided to use that as my birthday charity this year.”

Norwitch realized that with the amount he collected the previous year, he could have sent three kids to swimming for a year.

“I wanted to help kids play the sports they wanted, like swimming, tennis, baseball and soccer, when their parents couldn’t afford it, so I’d like to give $3,334 to the Village of Wellington on behalf of my family and friends who generously donated for my birthday,” he said. “They have helped make this happen with me. I hope that with this money, kids can participate in sports they want all year round.”

Councilman Matt Willhite asked that the money be specifically earmarked not to go into the general fund or any sports fund and be designated specifically to any child who is underprivileged or does not have the ability to pay.

“If anybody else wants to donate to that, that line item will be specifically dedicated for underprivileged kids who don’t have the ability to pay for items that they need to participate in a particular sport,” Willhite said. “As I said to this young man and his mother earlier, it’s random acts of kindness like this that will hopefully spark interest in others.”

He urged others in the community to get involved and join Norwitch on his mission.

“I think if there’s any way that we can help him in this achievement and his goal to help any kid who is underprivileged, I think it would be very beneficial to this community,” Willhite said.

“You’re definitely an old soul to think of other people in that way,” she said. “I really appreciate that and what you’ve done… I thank you for having the insight and seeing the need and meeting that need.”

Vice Mayor John Greene was also impressed by the young man. “Noah, I am so proud of you,” he said. “In the two and a half years that I have been sitting here, this is probably one of the most moving stories. You are very special.”

“The apple doesn’t fall very far from the tree, so I want to give congratulations and thanks to your parents because it’s obvious that they have instilled in you a moral code and compass that is definitely pointing the right way,” Coates said. “I hope that this example you’re setting is something that other kids and adults as well will follow.”

Mayor Bob Margolis also commended Norwitch. “Normally, we’re not a loss for words up here,” he said. “As your elected officials, we can sit up here and talk forever, but I am absolutely speechless.”

He praised Norwitch for reaching out to those in need.

“This is something that I will never, ever forget. You are welcome here any time,” Margolis said. “Let me know if there are other kids that you couldn’t help that maybe we can help. I am so proud of you.”
ABOVE: Fifth grader Noah Norwitch addresses the Wellington Village Council on Tuesday.