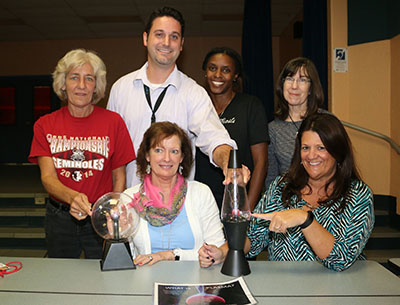 Students and parents were provided the opportunity to explore math and science concepts through hands-on activities provided by the South Florida Science Center.

Principal Shari Bremekamp stressed the importance of exposing students and their families to the various aspects of STEM education. “This is to increase family involvement and to bring awareness that we are a STEM school and what that means,” she said.

With 20 activities chosen by the science center, the 150 or so attendees were able to learn about science in a friendly, non-intimidating atmosphere.

Fifth-grade science and math teacher Michael Mann explained the apprehension shown by volunteers before the event.

“We have 20 volunteers, one for each station. The first thing each one of them said to me today was like, ‘Oh gosh, science, I don’t know if I can do this,’” he said. “They found it intimidating at first, and now, if you can go out there, you can see that it’s not so bad. It’s very easy.”

The stations, which were customized to accommodate students from kindergarten to fifth grade, provided a means for parents to learn about what the students learn in class.

“We have three of the STEM coaches here on campus right now, and we also have one of the fifth-grade math and science teachers here,” Bremekamp said. “They can also show the activities that they’re doing and how that connects with science and technology.”

Students had the opportunity to stack plastic pieces to make a roller coaster for marbles, which taught them about gravity. They were also able to use a solution to create an erupting volcano, listen to sound waves, add and subtract with dominos, learn about inertia with a ball and demonstrate many other concepts.

“It has the rectangle with the pixels, and they put their fingers in it,” she said. “A lot of them have used it before, but they didn’t know what it was. It was demonstrating that the greater amount of pixels that are used, the more clear the picture is. They have seen it before, and they have played with it before, but they didn’t understand what the concept was with pixels, and how it affects the picture on the television set.”

Watching the students draw the connections between science and math and everyday situations was crucial to the teachers.

“It’s interesting because a lot of the things they’re doing out there, are things that pretty much happen every day,” she said. “Even from the heartbeat — your heart beats every day, you just don’t get a chance to hear it. Everything is tying in to normal, everyday situations that they never actually thought were science.”

The adjustable activities allowed the teachers and volunteers to customize each child’s experience. “How much they’re getting out of it is based upon how much interest they have in it,” Mann said.

His station, math with dominos, taught students that math can be both fun and challenging.

“If you would poll nine out of 10 kindergartners or first-graders, or whoever was at the station, and say, ‘Do you want to do addition or subtraction?’ they’d be like, ‘No thanks.’ But they were having fun because it infused dominos, which is a game I’m sure a lot of the parents have at home,” he said. “They were actually enjoying these addition and subtraction scenarios.”

With so many stations to choose from, the students were able to see how science is infused into so many of the things they take for granted, added kindergarten teacher Debbie Breuninger.

The links between science and math are something the teachers have also been learning about, said Mann, who added that part of the STEM training is to show the interwoven relationships between science, math and technology.

“Technology is their world,” Bremekamp said. “We’re just trying to provide opportunities to give them technology so it’s fun, and yet still making sure we’re making those ties into science, technology, engineering and math — and it’s not just about being on a computer.”
ABOVE: Susan Monticello, Michael Mann, Stacey Bryant and Debbie Breuninger check out the plasma ball and lava lamp with Meb Weaver and Principal Shari Bremekamp.