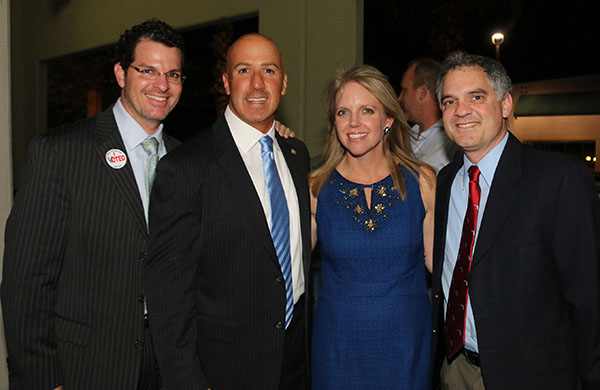 McKinlay and her team were surrounded by supporters at World of Beer in Wellington as they watched the numbers come in Tuesday night.

By Wednesday, she was ready to get down to business.

“I woke up this morning and came to work,” she told the Town-Crier. “It feels great. It was a wonderful victory, tremendous support. I’m very proud to be the new county commissioner for District 6. I look forward to getting to work on Nov. 18.”

“I know she’s really excited about it,” Bonlarron said. “I obviously am super-excited for her, for us and for the county, for her to be a county commissioner, but at the same time, a little sad that on the day-to-day in our office, I won’t have her here working with us all the time.”

The connections that McKinlay has made through that position are among the key strengths she stressed during her campaign, along with her focus on family. At her party on Tuesday, her children and friends were in attendance to cheer her on and offer hugs at every turn. With their new roles, as the children of a commissioner, they look to their mother and her accomplishments with pride.

“They’re so excited,” McKinlay said. “My daughter told me last night how proud she was of me. My son was all smiles this morning. They’re very proud of their mom.”

That sense of confidence can be also be seen in those who work with her.

“Melissa always calls me her boss around the office,” Bonlarron joked, “but I’m really not. We’re both equal parts of our team. I know that now that she’s going to be one of my bosses, we’re both going to continue to work together as a team. It’s what makes our legislative office successful, and I think that’s why Melissa’s going to be a phenomenal county commissioner.”

One of McKinlay’s goals is giving every area of the district a voice, and her campaign focus has been on improving the Glades area.

“Opening an office in the Glades is the first thing I plan on doing, and getting that position filled so that they have a full-time staff member in the community, then getting to work on some of the county’s priorities that we need to work with our state partners on, including appropriation requests for the Glades,” she said. “We still need water and road money — that’s one of the first items on the county’s legislative agenda for 2015. I want to make sure that the needs of the Glades are included in that agenda.”

McKinlay said she aims to be a county commissioner representing all residents of District 6.