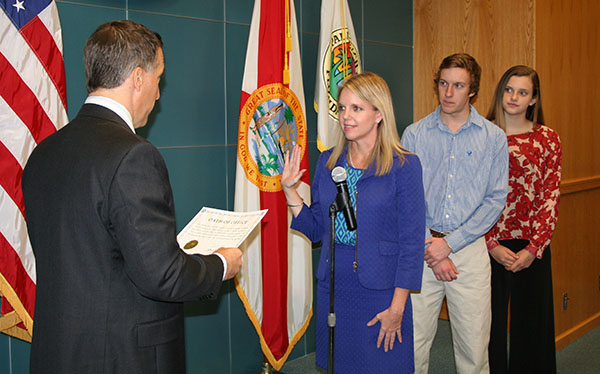 McKinlay took the oath of office from State Attorney Dave Aronberg, joined by her son, Brady, and daughter, Annika.

Also taking the oath of office Tuesday were District 4 Commissioner Steve Abrams and District 2 Commissioner Paulette Burdick, who retained their seats for a new four-year term.

The board’s annual reorganizational meeting was not without drama. Burdick, who as the current vice mayor was in line to take the gavel from outgoing Mayor Priscilla Taylor, was passed over in favor of District 3 Commissioner Shelley Vana — a move Burdick attributed to her anti-development positions.

Abrams congratulated Taylor for her year of presiding over the commission. “You handled all the hard issues, and you handled them wonderfully,” he said. “I was glad to have served with you under your leadership.”

Burdick thanked Santamaria for his eight years of service on the commission and his commitment to ethics and integrity, and for continuing to advocate on those issues. She also thanked Taylor for her service as mayor, and pointed out that it would be the last reorganizational meeting for longtime County Administrator Bob Weisman, who is retiring.

“I want to thank you for your years of service to the county,” she said to Weisman.

District 1 Commissioner Hal Valeche agreed that it had been a good year under Taylor’s leadership.

“We’ve had some really interesting moments here in the chamber that I’ll remember for a long time positively,” he said.

Valeche regretted that Santamaria was not present so he could express his sentiments directly.

“He and I have disagreed quite a bit, as you know, but it was all in the spirit of producing a better result for our residents,” Valeche said. “He’s dedicated to what he believes, and I think that’s an admirable thing in public service.”

Vana said that she thought there is a lot of good work to be done in the future.

“Now that we have term limits, there is a lot of turnover, and we have to get with it real fast,” she said. “It has been a good year of people working together and trying to get things done.”

Taylor commended everyone for being supportive over the past year.

“We have had a difficult year in some instances, especially dealing with development,” she said. “We were hit with a lot of things, but we were able to come together and get them done.”

She included among accomplishments the initiation of a search for a new county administrator. “I asked him to stay, so you all would know, but he told me indeed not,” Taylor said.

Weisman agreed that the accomplishments of the board over the past year had been outstanding, and presented Taylor with a plaque in appreciation for her leadership.

“I think you have performed the mayoralty in the way it was envisioned to be done, and come out as a strong leader on behalf of the board,” Weisman said.

He also displayed a plaque for Santamaria in appreciation of his service, which Weisman said he would get to him.

“It has been an interesting experience to work with Commissioner Santamaria over the years,” he said. “It has been challenging, but challenging in a good way. It’s a challenge that staff has found very worthwhile and for the overall good of the county.”

McKinlay thanked all her supporters, including some attending the meeting.

“I know you’re going to keep me on my toes for the next four years,” she said. “I have no doubt about that, but I appreciate you being here, and I look forward to finding some things on common ground to work toward together.”

She also thanked the staff in the county’s Legislative Affairs Department, where she has worked for the past several years, for giving her experience to perform better as a commissioner.

“I look forward to my new role working with you working on behalf of the county and its legislative agenda and pushing that forward,” McKinlay said.

She also thanked Weisman for being able to work with him.

“You’ve given me the opportunity as being a fellow staff member to take the position I was hired to do and grow it and make it my own,” McKinlay said. “Although it will only be a short time that we get to work together, I look forward to it.”

She said that her goal is to work with everyone and build consensus.

“I will focus my next four years on infrastructure improvements, particularly in the Glades, and on economic development in an area that has unemployment rates near 40 percent,” she said.

McKinlay added that as a 19-year member of the Junior League, she will continue to advocate on behalf of women, children and families.

“Those programs and those needs of our families, especially our kids who are at risk in juvenile justice and prevention programs, protecting the homeless and making sure that they live in dignity and helping take them off the streets and into permanent housing, those are some of the things that are important to me,” she said. “That includes making sure that everyone has a warm meal on their plate before they go to bed, and taking care of those who need a helping hand up. I look forward to working with all of you on those efforts.”

ABOVE: Melissa McKinlay takes the oath of office from State Attorney Dave Aronberg as her son, Brady, and daughter, Annika, look on.