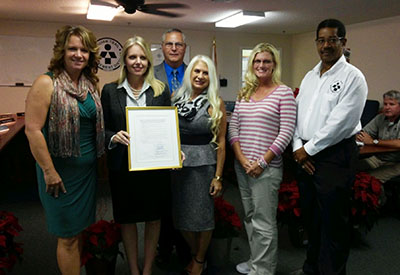 Supervisor Michelle Damone read the resolution, which concluded, “The supervisors of the board at Indian Trail are committed to working with Commissioner McKinlay in a positive manner to regionally serve the needs of the residents of The Acreage.”

McKinlay thanked the board for the resolution and the warm welcome.

“I’m a fresh face around here, and I appreciate you extending those sincere remarks,” McKinlay said. “I’m happy to be here. I’ve survived my first two commission meetings.”

Although sworn in only a few weeks ago, McKinlay said she has already gone to work meeting with other officials to address issues in the western communities.

“I just want to share a couple of things with you,” she said. “One of the reasons I came in late tonight is that I have been working with the newly appointed chairman of the Senate Committee on Transportation and Economic Development and Appropriations all day about community development ideas for the western communities of Palm Beach County.”

“I’ve been working with him, and I felt that he represented The Acreage very well,” she said. “As a person on the campaign trail, he was tough as nails and did not make anything easy.”

McKinlay said she also asked County Administrator Bob Weisman to reach out to the ITID board and other independent districts to hold a roundtable meeting and start working together on some long-range planning issues now that new developments are starting to come online.

McKinlay said she was interested in economic development as far west as 20-Mile Bend, and possible employment centers for residents of the Glades, where unemployment is 40 percent, as well as residents of The Acreage.

“I want to make sure that all the players involved are seated at the table together,” she said. “I made that promise to you that I would start reaching out to build these relationships and work hard together, and I’m going to live up to that promise. I look forward to working with each and every one of you.”

Damone said she considered McKinlay a true professional and was happy that she was going to be working with the western communities.

“I am looking forward to the next four years of teamwork with all our community members and leaders,” Damone said. “We’re really going to get some things done out here, and I just can’t tell you how excited I am.”

Jacobs said she was optimistic that McKinlay would make a positive difference for all of District 6. “She’s a fantastic lady, and I just hope that we can all come together,” Jacobs said.

Also Wednesday, the ITID board held its annual reorganizational meeting. Hager made a motion for all officers to remain as they are, with Jacobs as president, Bair as vice president, Damone as treasurer, attorney Mary Viator secretary and Supervisor Gary Dunkley as assistant secretary. The motion carried 3-2, with Damone and Jacobs opposed.

ABOVE: County Commissioner Melissa McKinlay accepts the resolution from the Indian Trail Improvement District Board of Supervisors.