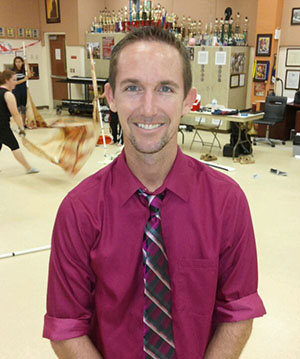 Harvey is in his second year as band director at Seminole Ridge High School, and took the community band position about five weeks ago.

Harvey, who is 32 and lives in Wellington, was born in Pahokee and raised in Clewiston, where he started in band while in sixth grade. After high school, he attended Palm Beach Atlantic University, where he earned his undergraduate degree in French horn performance, although his aspiration is to conduct at the college level. “While I was at PBA, I got to conduct the orchestra in a concert,” he said.

He has also conducted the musical Oklahoma with the Palm Beach Principal Players.

Upon graduation in 2006, he taught at Jupiter Christian School for three years. During his tenure there, the school earned its first superior rating from the Florida Bandmasters Association assessment.

From there, Harvey got his master’s degree in instrumental conducting at Florida Atlantic University, where he was a graduate teaching assistant for the Marching Owls, the wind ensemble and chamber groups. “I played French horn in all of those groups as well,” he said.

Harvey said the turnout of musicians for the community band has increased with every rehearsal, and he expects a full sound for the holiday concert.

“I would estimate somewhere between 50 to 70 players right now,” he said. “It built back up pretty quick, but I’ve only had a very short amount of time since I got hired to put together a Christmas concert and to try to get members into the group.”

The holiday concert will feature An Irving Berlin Christmas, with “Happy Holiday,” “White Christmas” and “Let’s Start the New Year Right,” and traditional Jewish fare with festive songs of Hanukkah.

They will also play Holiday Homecoming, which includes segments of “There’s No Place Like Home for the Holidays,” “I’ll be Home for Christmas” and “Winter Wonderland.”

The band will also play a quirky little arrangement of “Up on the Housetop,” “Sleigh Ride” by Leroy Anderson, an audience sing-along with traditional Christmas songs, and some marches.

“It’s going to be probably the longest concert they’ve done in a couple of seasons,” Harvey said. “At least that’s what the members tell me.”

The concert is free, and refreshments will be served during intermission. For more info., call (561) 790-5149 or visit www.royalpalmbeach.com.

ABOVE: Daniel Harvey is the new director of the Royal Palm Beach Community Band.