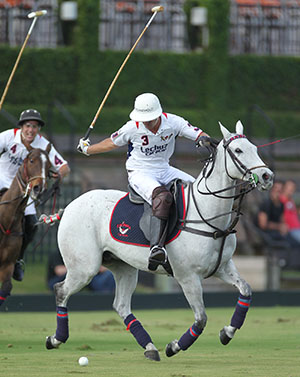 The 2015 season kicks off this weekend at the International Polo Club Palm Beach, launching 16 weeks of field action that features the world’s top polo players.

The season’s opening tournament is the Herbie Pennell Cup. While preliminary matches start Friday, Jan. 2, the official opening day is Sunday, Jan. 4, which will feature the tournament finals amid all the pomp and circumstance that goes along with Sunday polo in Wellington.

The gates open for stadium lawn seating, bleacher seats and select box seats Sunday at 1 p.m., and the doors open for Sunday brunch at the Pavilion at 2 p.m., where guests will be treated to a delectable experience created by International Polo Club Catering Powered by Aaron’s Catering.

High-performance exotic and classic cars will be on display at the Supercar Horsepower Show, which can be visited throughout the afternoon.

IPC President John Wash promises that 2015 will be the best polo season ever.

“Every year, we have been able to take the entire polo experience up a notch,” Wash said. “Our executive team puts in long days brainstorming new ideas and juggling the hundreds of details that go into making IPC the world’s premier polo destination.”

After the Herbie Pennell Cup is the 20-goal Joe Barry Memorial Cup, the Ylvisaker Cup and the Iglehart Cup before the 26-goal games begin in March and April.

“We couldn’t be more proud to be the home of the most prestigious tournaments in North America, the USPA C.V. Whitney Cup, the Piaget USPA Gold Cup and the U.S. Open Polo Championship,” Wash said.

This year’s brunch features the theme “Taste of Italy” and follows the culinary delights that caterers Aaron and Julie Menitoff experienced recently while touring Italy.

In addition to the seemingly never-ending brunch featuring a rotating menu of 80 favorite dishes, there will also be interactive stations where guests can explore Italy through its cuisine. There is a charcuterie and cheese station, a brick oven gourmet flatbread station and a gelateria station.

Whether guests indulge in hand-stretched and seasoned mozzarella and buratta, custom-made pizza with exotic ingredients or handmade gelato with an array of toppings, as well as miniature specialty deserts, there is something to satiate every culinary desire.

Joining the exclusive Veuve Clicquot Airstream Lounge is the Beerstream Lounge, new to the 2015 season, featuring a customized experience for craft beer enthusiasts.

Whether in the Pavilion, the grandstands, the sidelines or the tailgate spots, guests are invited to watch the 3 p.m. matches that take place each Sunday on the lush Engel & Völkers field.

Tickets start at just $10, making experiencing the thrill of a polo match available regardless of budget concerns.

Teams of horses and riders will charge down the field with their sights set on the ball. Control of that ball means everything, and the battle for the ball creates an exciting, fast-paced game as horse and rider work toward their common objective.

“These fields are looking fantastic right now, which should guarantee a great season,” Director of Polo Operations Jimmy Newman said.

For those too young to enjoy the game, there are plenty of attention-grabbing activities available at the Kids’ Fun Zone, which is open during the entire 16-week polo season. At only $10 per child, the fenced-in area features bounce houses, a rock climbing wall, face painting, an inflatable slide, an obstacle course, crafts, games, snacks and more.

There is plenty to see and enjoy during the game, as luxury brands align themselves with the prestigious club, where IPC is the see-and-be-seen epicenter for the polo community.

Engel & Völkers, leading international real estate advisors, is one of the newest sponsors to align itself with IPC as the field sponsor.

At halftime, guests are invited on the field for the divot stomp and champagne. After the match, many stay for the awards ceremony and later to meet the players. Still later, the drapes at the Pavilion close and disco lights turn on for the after-party.

The International Polo Club Palm Beach is located at 3667 120th Avenue South in Wellington. To learn more, visit www.internationalpoloclub.com or call (561) 204-5687.
ABOVE: The world’s best polo action returns to IPC this weekend. Photo by David Lominska