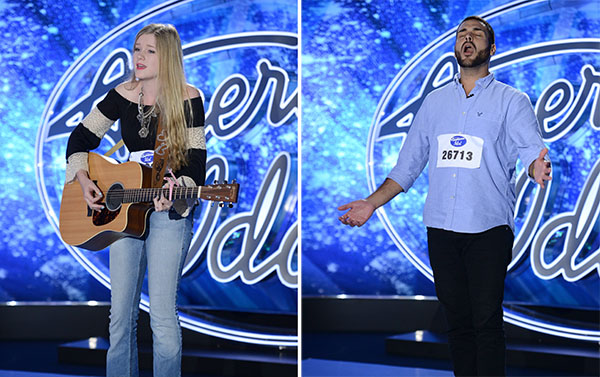 American Idol hopefuls Emily Brooke and Hector Montenegro made it past yet another hurdle as they advanced past the auditions and geared themselves up for Hollywood Week.

As their friendships grow and their confidence increases, the two local artists find themselves one step closer to a spot on that final coveted list of 24.

For Brooke, who still attends Wellington High School, this is a major accomplishment, especially at such a young age. Montenegro, who attended Royal Palm Beach High School, has far surpassed his last American Idol attempt and is thrilled with the exposure the show has generated so far.

Hollywood Week, and American Idol in general, has been a dream come true for Brooke, who at only 16 is furthering her singing career. Brooke is no stranger to competition, but has found that American Idol is unique.

“My favorite thing has been how nice everyone is,” Brooke said, comparing American Idol to other competitions she has experienced.

As the audition airings continue, Brooke is reflecting on her experience and getting ready for the Hollywood Week reveal.

To those who don’t know her, or haven’t met her yet, Brooke wanted to pass along the message that she loves to sing. “If they could watch the show, that would be absolutely amazing,” she said, asking friends and family to start a trend of #TeamEmilyBrooke on Twitter and Facebook.

Brooke’s career is well on its way, and reaching Hollywood Week is just an added bonus.

“I feel like already American Idol has helped me with my career. I’ve learned so much from the judges and meeting people there who are in the competition, as well,” she said. “I’ve learned what I need to work on, and I’m going to work on that.”

With many lessons learned and friendships made, Brooke is ready to see what Hollywood Week brings. “It has been an amazing experience,” Brooke said. “It’s the best experience I’ve ever had.”

Montenegro, 24, is also having a once-in-a-lifetime experience with American Idol.

Through the show, he met Brooke. “It was one of those times when you meet someone and just know you’re meant to be friends,” he said. “She’s such a sweetheart.”

He is humbled by the realization that they made it to Hollywood Week.

“They have a good chunk of people who have made it through the initial auditions for a reason. It was kind of crazy thinking that so many hundreds of people have made it to Hollywood Week. Among those people is the American Idol,” he said. “Thinking about that made it a lot more real for me.”

Hollywood Week wasn’t all fun and games, though. “The nerves for Hollywood Week were definitely more intense than the auditions just because the stakes and the bar had been raised by that point,” Montenegro said. “In that stressful moment, a lot of us kind of bonded with each other and helped each other through the stress.”

Aside from the bonding, he enjoyed the feedback from the judges.

“The whole Hollywood experience was just out of this world,” he said. “Even though it was crazy and hectic and there were tears, I wouldn’t trade it for the world.”

Montenegro, who previously auditioned for the show but did not make it past the initial audition rounds, was thrilled when he was told he made it to Hollywood Week.

“Making it to Hollywood Week was a dream come true,” he said. “It gave me a chance to go to L.A. and really show the judges what I had, which I’ve never really had a shot at before. Just being able to go out there and experience the same variety and excitement with all these other contestants was just so cool.”

His friends and family have been pillars of support.

“My friends and family mean so much to me. To have gotten the support and the love that I’ve gotten from them has been unreal. As far as my mother goes, she’s been out of the roof about this whole experience,” Montenegro said. “She doesn’t know whether she should hug me and laugh or jump up and down.”

He is taking the opportunities the show is providing and embracing them.

“American Idol means everything to me,” Montenegro said. “It’s a life-changing experience. It’s something that cuts out a lot of the work that we have to do as street artists by ourselves to get someone to listen to us. It’s a very easy way in the door. You rise to fame pretty quickly because of the viewers and the people who have watched the show for so long. It’s a huge step for me to have made it even this far.”

To find out how Brooke and Montenegro did at Hollywood Week, be sure to tune in to American Idol in February. Their auditions and other videos can be found on the American Idol web site.