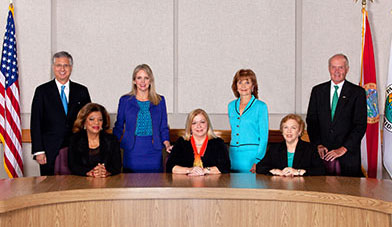 In a 5-2 vote Tuesday, the Palm Beach County Commission approved selling the 1.43-acre piece of land where the Central Palm Beach County Chamber of Commerce building sits to the Town of Loxahatchee Groves for $20,000, as long as it remains in public use.

County Administrator Bob Weisman said the land was leased to the chamber many years ago at just $1 per year.

“They constructed an office building on it,” Weisman said. “They no longer want to keep that building, and the town has offered to purchase the building from the chamber.”

He explained that the town wishes to take possession of the building only if the county sells the land or gives the land to the town.

Weisman explained that the land is potentially very valuable for office or commercial use, but county staff did not attempt to value it that way, and came up with a $50,000 price if it remains in civic use, or $20,000 as a park.

“I’ve lived in Loxahatchee Groves for 54 years,” Jarriel said. “I think Loxahatchee Groves has made some great improvements in the last few years. We’ve got the state college coming to our town. This chamber building would be a very good benefit and give us recognition.”

Jarriel pointed out that the building is in a good location where it will be safe for people to come and do business with the town.

“I would like to get it for free as a resident,” he said. “I pay a lot of taxes, but if we have to pay for it, I would appreciate it if we could get it at a reasonable price. This is just another step in putting Loxahatchee Groves on the map, and I think we’re doing an outstanding job for our community, and the residents would appreciate your help in this.”

District 6 Commissioner Melissa McKinlay said the sale of the land was one of the first things she has been able to work on for residents in her district.

“I think this is great idea for them,” McKinlay said. “Right now, they share their council meeting space with the Loxahatchee Groves Water Control District. It’s cramped quarters, and they can’t really provide adequate space for the public to attend their meetings.”

She said that selling the land to the town will protect it for the future. “They are in a growing area of the county,” McKinlay said. “This proposal allows this piece of property to stay for a public purpose instead of someday having it sold off to become private commercial property. It still maintains public access to the park space that the county has behind there.”

McKinlay made a motion to approve the sale for $20,000 contingent on the town closing on the purchase of the chamber building, and Vice Mayor Mary Lou Berger seconded the motion.

However, Commissioner Hal Valeche opposed selling the property for $20,000.

“I am not certain why we are essentially giving away the property that’s got an appraisal of $180,000 on it,” Valeche said. “I tend to support the staff’s recommendation of at least $50,000. I’m not even really very comfortable with that.”

Valeche said he thought the chamber did not negotiate a good deal, since any price for the land comes out of proceeds of the building sale.

“Although I would like to defer to the district commissioner, I’d still want to go with the staff recommendation of $50,000,” he said.

Commissioner Paulette Burdick agreed with Valeche. “I’m torn on this one because I think we did a disservice to the communities out west with regard to the approval and size and scope of Minto [West], but I share similar comments as Commissioner Valeche, that $50,000 staff is recommending, and I value their opinion, but the land is valued at $180,000, so I think we need some kind of compromise.”

Commissioner Priscilla Taylor asked Loxahatchee Groves representatives if they were prepared to pay $50,000, and Mayor Dave Browning said they were still negotiating with the chamber.

“Whatever the increase is for us to buy the building, we’ve got a budget number of about $480,000 that we’re willing to pay for the building,” Browning said. “Whatever additional that you want, we’re going to be looking for the chamber to pick that up.”

Commissioner Steve Abrams said he favored the motion of $20,000. “To me, this is just a small amount, the difference in amount between [$20,000 and $50,000] is small to us, but to a not-for-profit organization like the chamber of commerce, it’s a large amount, so I’m not going to quibble over this,” Abrams said.

Mayor Shelley Vana said she would favor the motion, pointing out that as a state representative, she sponsored the bill that created the town.

“I’d give it to them, so $20,000 I would support,” she said. “We do a lot for a lot of other places, and this will give them the hand up that they need. We can all work together, and I’m sure that if we need to use the building, they’ll let us use it some days.”

McKinlay said that she plans to hold a town hall meeting there as soon as they’re up and running.

The motion carried 5-2, with Valeche and Burdick dissenting.

In other business, the commissioners approved a resolution objecting to the postponement of the Florida Department of Transportation’s construction funding for State Road 7 from 60th Street North to Northlake Blvd. to fiscal year 2020, requesting that the funding be available after July 1, 2016. Taylor made a motion to approve the resolution, which carried 7-0.