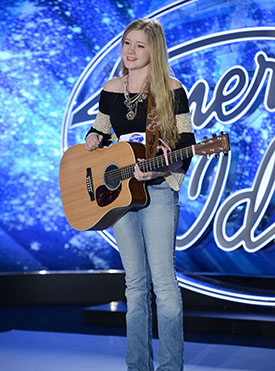 Hollywood Week: It marks one of the segues into making it through the elimination rounds to the top 24 of the talent-packed American Idol. Airing over two weeks, the first episode had singers perform for the judges in lines of 10, before the second episode where singers worked in groups.

Next week, on Wednesday, Feb. 18, the top 48 perform once more in a special showcase before the second showcase round, Feb. 19, where the top 24 are announced.

Hollywood Week was a stressful whirlwind for the 16-year-old budding star, who found that not only is she learning a great deal, but she is forming lifelong friendships. One of the most amazing things, she said, was meeting all of the different contestants from all over the country.

“I met a new friend during Hollywood Week,” she said, explaining that their friendship has grown quickly.

Beyond the competition, some of those friendships she is making have allowed Brooke the opportunity to be around people with the same goals in mind.

“There are so many other people who are there doing the same thing that you are, so it’s like you all relate to each other,” she said. “It’s really cool.”

As far as making it this far into the competition, that is something the Wellington High School student does not take for granted. “Knowing I made it through that whole part was absolutely crazy, because there were so many people,” she said.

Entering into Hollywood Week, and the subsequent episodes, Brooke would remind herself, “I’m safe today. What’s tomorrow going to hold?”

To be in that situation was an awesome experience, she said.

“It was actually really surprising, to be honest,” Brooke said about making it past the group part of Hollywood Week, especially since she was feeling ill. “It was difficult to make sure to stay motivated, stay hydrated, and make sure you do everything you need to do to get through that week.”

The group performances came as a delightful surprise to Brooke. They performed “A Little Help from My Friends” by the Beatles.

“My group was amazing. They were all so nice and so fun. It was just the best group I could ask for. I’m just glad I was able to have them,” she said. “The performance… we definitely didn’t have all of our stuff together that we needed to have together. We all know that. It’s just funny because we all laugh at it like, ‘Whoa, we actually got through that.’”

Even being sick, Brooke made it through, which was a welcome surprise, only solidifying how apparent her talent and promise is.

Brooke has also received a great deal of help and advice from the judges.

“I am always just wanting to improve any way I can with my music and my stage performance,” she said. “Getting that experience, being able to talk to them and ask them what I need to work on — it has been very helpful. Since then, I’ve gotten so much more confident. I’m just getting better and better from their advice.”

One criticism Brooke recalls from the judges is that Jennifer Lopez didn’t always feel the emotions when she was singing, so Brooke has been working hard to change that and make her performances more emotional. “That’s definitely something I’ve had to work really hard on,” she said.

The hard work that goes into the competition, and pursuing a professional singing career, has been softened with the support of her family.

Having her mother with her has been an amazing experience.

“It was really good, especially since I wasn’t feeling very well,” Brooke said, explaining that her mom was always there to help her feel better. “It’s just really awesome that my parents are so supportive, and it was great having my mom there to have my back.”

You’ll have to watch Wednesday’s episode online or on demand, but be sure to tune in Thursday to see how Brooke does and catch her showcasing her talent.

For more information about this season of American Idol, visit www.americanidol.com. To learn more about Brooke, visit www.emilybrookemusic.com.