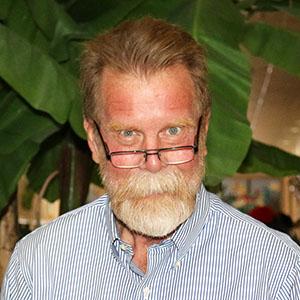 The race is one of two council contests on the Tuesday, March 10 ballot, which also includes several ballot questions.

Harris, chairman of the town’s Roadways, Equestrian Trails & Greenway Advisory Committee (RETGAC), has been sharply critical of the town’s policies, especially its relationship with the Loxahatchee Groves Water Control District.

He was called to the Florida Keys in 1985 to join his family’s construction business. Harris and his wife moved to Islamorada, where they lived until 2006.

That work required Harris to be a problem solver.

“[In] my 30 years’ experience as a state-certified general contractor in building multimillion-dollar projects, I’ve designed scopes of work, I’ve developed plans and specifications for them,” he said. “I have contracted the work, I have completed multi-million-dollar projects to successful completion.”

He kept his father’s business going until 2008, when the economic downturn hit. “It took down half the construction industry in the State of Florida,” Harris noted.

At the time, he was also hit with life-changing news.

“In 2006, I was diagnosed with Stage 4 cancer and was given a 15 percent chance of living five years. We moved to Loxahatchee Groves to set up my wife in a business and a life that she would be comfortable with. But I’m here eight years later, still breathing and still enjoying life,” he said. “Loxahatchee Groves has given me my life back. The retreat, the quietness, the rural lifestyle is so amazing. It just rejuvenated me, and I want to give something back.”

“I have been involved in town government since 2011. I served a little under three years on the Planning & Zoning Board,” he said.

More recently, he served on REGTAC, appointed by Liang. However, Liang tried to remove him from the board late last year due to accusations that Harris was rude and improperly used the gavel. It’s a charge that Harris strongly denies, claiming that he was being punished for speaking out about the LGWCD and other road issues.

“The current council has a favorite subcontractor,” he said. “They claim it’s the only one in the state that does OGEM [open-graded emulsified mix road paving]. Yesterday, I turned in a letter to the town manager from the public works director of Miami-Dade County, which had listings of five different contractors who do OGEM work. But according to our town council, there’s only one guy who does that.”

The paving of Marcella Blvd. and Compton and Bryan roads, Harris said, was not done in the best manner possible. “The contract was awarded for $72,000,” he said. “The very first day, they came back and asked for a $10,000 change order. The project ended up costing almost $140,000 because of the way it was handled. The people paid double for the project.”

Regular asphalt has a 30-year lifespan, while OGEM has a seven-year lifespan and needs to be resurfaced, he said. “Asphalt is a better dollar value than OGEM,” Harris said.

Harris critiqued the LGWCD for its road preparation and planning prior to installing OGEM. “We’re looking at extensive repairs over the years,” he asserted.

Harris said his top three campaign issues are the opening and improvement of equestrian trails, the control of roads and term limits.

“Under state statute, in June or July, according to our town manager, the town can indeed take site control of all roads in the Town of Loxahatchee Groves,” he said, explaining that after seven years, the town no longer needs to go through the LGWCD to make decisions about the roads.

Term limits are important to Harris, which he said is needed to give the residents back control of their government. “Our government is a totalitarian democracy,” he said, “not a representative one. They let you vote, but they won’t let you participate in the decision-making.”

There has been controversy regarding the relationship between the town government and the LGWCD. Harris feels that there needs to be separation between the two entities.

“The Loxahatchee Groves Water Control District is a very integral part of the town. It handles maintenance. With the town taking site control of the roads, the water district can then focus on drainage,” he said.

Eight months ago, Harris was asking to have the LGWCD become a dependent entity of the town, but has since changed his mind. “I am now of the opinion that we need to make the water district independent of the town,” he said. “We take over all the roads; all they have to do is focus on drainage. They have their own method through taxes to fund that.”

Harris feels that the town must take more responsibility for its roads. For example, many bridges across the canals need to be improved and repaired, Harris said.

“If we’re paying for road services, let’s maintain the roads as they need to be, not just trying to pass off the financial burden to the property owners,” he said.

As for larger roads, Harris would like to see Okeechobee Blvd. with a heavily wooded feel. If it must be made into four lanes, he would prefer a 50-foot median.

“I’d also like roundabouts put in at Folsom on Okeechobee, as a traffic-calming device and to help motivate [residents of] new developments to use the major roads such as Southern or Northlake,” he said.

If Okeechobee Blvd. becomes too large, it will divide the town, effectively cutting off equestrian trails and separating the community. “It could sever the heart and soul of Loxahatchee Groves if it becomes just a multi-lane ribbon of asphalt,” Harris said.

He said that commercial property is necessary for the community, as he predicts gas tax revenue to fall as the vehicle industry is creating cars getting higher mileage and more people are working from home.

“The current zoning districts of our town suggest that all of the commercial is along Southern,” Harris said, noting that the equestrian industry in Loxahatchee Groves, the town’s new commercial industry, has seen an uptick.

Harris is happy with recent changes at the town’s contracted management firm.

“I support Underwood Management Services,” he said. “They have demonstrated a great eagerness to serve. They have improved their method of agenda development by showing problems and solutions instead of just generalities. I see an improved town management. I support them. I want them to stay.”

Harris would like the town to keep its focus on agricultural developments, such as nurseries and horse farms.

“I believe that town governments remain honest as long as they remain chiefly agriculturally oriented,” he said. “As long as the vacant lands are out there, we will have right and proper representation. When there becomes an urban sprawl, everyone’s hands get in the pot and all bets are off. I’m interested in all the roads being paved. They need to be paved, for life safety.”

While Harris respects Liang for his willingness to serve, he criticized him specifically for being a passive player in town affairs.

“He never initiates any issues,” Harris said. “He is an amplifier of something that is already presented to the town.”

Harris, on the contrary, said he will be a voice for the residents.

“I live and work daily in Loxahatchee Groves,” he said. “I believe in equal influence, equal benefit and everyone getting an equal deal. Our current government does not offer that. I will work tirelessly to make sure that everyone is heard and everyone is considered. I believe in right and proper government. I believe in a representative democracy. I want to be a public servant, not a person up on a dais who dictates to its citizens.”