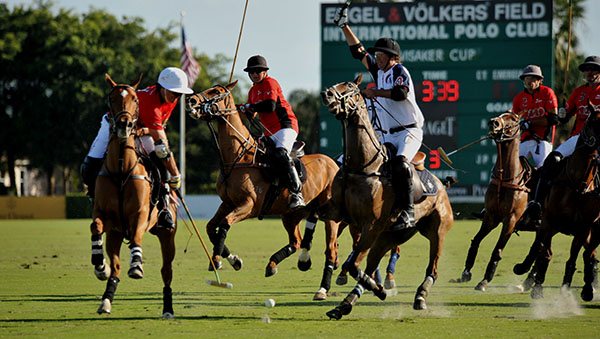 Brazilian 7-goaler Joao Ganon scored the first goal of the game in the first 30 seconds for a 1-0 advantage. Three minutes later, Ganon converted a 30-yard penalty shot for a goal to make it 2-0. Nic Roldan cut into the CT Energia lead with a goal from the field, making it 2-1. Ganon added another penalty goal at the 1:22 mark, followed by a goal from the field from Nick Manifold to end the period with CT Energia on top of a 4-1 lead.

Audi charged back into the game in the second chukker, with Roldan scoring the first two goals and cutting the CT Energia lead to a single goal, 4-3. Audi team captain Marc Ganzi tied the game with his first goal of the match, making it 4-4. Manifold put CT Energia in the lead again with his second goal of the game, making the score 5-4. Fred Mannix scored the final goal of the chukker as the horn sounded. After two periods of play, the score was tied at 5-5.

The respective defenses were at their best in the third chukker, and goals were at a premium. Roldan scored the only goal of the chukker with 2:14 on the game clock, giving Audi its first lead of the game, 6-5.

Audi had its way with CT Energia in the fourth chukker. Single goals from Ganon and Kampsen first tied, 6-6, and then gave the lead back to CT Energia, 7-6. Roldan and Mannix scored two more goals each as Audi left the field at the end of the fourth chukker with a 10-7 lead.

Roldan added another goal from the field at the 5:04 mark, and Ganzi converted a 30-yard penalty shot, ending the fifth chukker with Audi on top, 12-7.

CT Energia tried to stage a late rally and picked up a pair of goals from Manifold in the sixth and final chukker, but at the end of the game, it was Audi driving off with the 12-9 victory.

ABOVE: After trading the lead back and forth, Audi took control of the game in the fourth chukker. Photo by Alex Pacheco