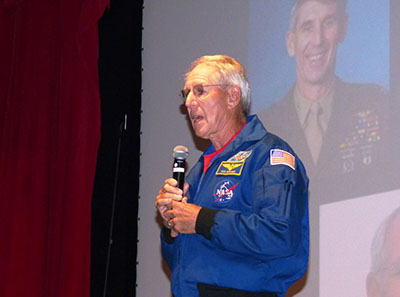 “That shuttle is fitted on top of 5,000 pounds of explosives. When I experienced my first flight, once we got into space, I took my helmet off and floated over to the window, and that’s when it hit me how incredible it was… 8.5 seconds earlier I had been sitting on the launch pad,” he recalled.

The field trip was designed to engage students taking the most challenging STEM classes and perhaps spark their desires for a future in the space program.

“Even though the space shuttle program has ended, we’re still selecting astronauts for future programs,” Springer said. “In the future, we hope to put humans on Mars in the next decade or two, and some of you could be involved — you who would dare mighty things.”

The trip for top students in Wellington’s public high schools is underwritten by the Jacobs family of Wellington, whose company, Delaware North, operates the Kennedy Space Center Visitor Complex for NASA.

“Meeting the astronaut made it more personal,” Palm Beach Central senior Haley Stark said. “You can see all the documentaries you want, but this made it real.”

Not only did they learn about the space program’s future, but also about its past through a tour of the Astronaut Hall of Fame and a visit to the Space Shuttle Atlantis.

Jonathan Cheatham, a senior who was repeating the trip this year, was so inspired by the experience that he applied and was accepted into Embry-Riddle Aeronautical University.

“I was fascinated with what goes into every part of the space program,” Cheatham said. “It’s actually interesting how they find different ways of solving problems. This trip teaches you about the space program and technology advancement.”