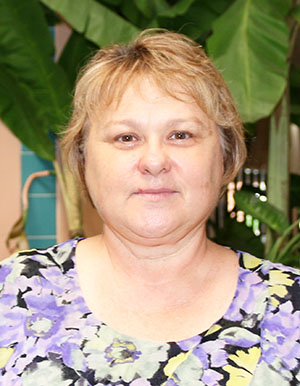 Standish is a Palm Beach County native who has lived in Loxahatchee Groves since 1983. She is project administrator for a construction firm, and before that worked for an electrical contractor doing accounting and bookkeeping.

“I’m very aware of the need for financial accuracy and accountability,” she told the Town-Crier. “I have lived in Loxahatchee Groves for more than 30 years. I have watched it grow from being a thriving agricultural community to a community that is now fighting commercial development. I am very concerned about the push of development into our community. I see development orders being written that favor the developers and not the community.”

As an example, she cited the recent development order for projects on both sides of B Road at Southern Blvd.

“That order should have included a better road,” she said, explaining that the paving on B Road north of the college entrance will be open-graded emulsified mix (OGEM) rather than asphalt as is planned to connect to Southern Blvd. “[OGEM] does not have a long lifespan. It cannot hold up to commercial traffic. Eventually those landowners will be assessed to put in another road.”

Standish thinks that OGEM roads in other parts of town are being forced on the property owners.

“Even more importantly, there is no question as to do we need to get infrastructure in before we put down a road,” she said. “Do you want water lines? Do you want sewer? There is poor planning for infrastructure. I’m concerned it’s going to affect the landowners in the community.”

Standish favors providing quality services and safe areas to walk and ride throughout the community.

“Again, that gets back to infrastructure,” she said. “We are putting in roads on one side and forcing horses and pedestrians off the roads. When we had dirt roads, people drove more slowly.”

Standish said that she is a better choice than Jarriel because she is concerned for the welfare of all residents, not just a select few. “I’m not a smooth-talking politician who is just concerned about developers and a select group of people,” she said.

She added that someone needs to help the community find financing for projects, which she believes can be done only by getting roads away from the Loxahatchee Groves Water Control District.

“There’s a battle with the water district trying to control the town,” Standish said. “I’m not afraid to question the water district. I am not afraid to question the town council. For that, I’m labeled as not a team member. I believe government should be held accountable and questioned. My concern is that my opponent is only concerned about pleasing the Loxahatchee Groves Water Control District.”

As an example, she cites the development of only some easements as equestrian trails.

“I believe every maintenance easement along every road should be available to the people along that road to walk and ride their horses,” Standish said. “We are being directed by the water district. Mr. Jarriel served on the water district board. He seems unable to break that bond.”

She said that she is for the town being financially responsible and finding ways to seek outside funding, rather than burden the residents with more taxes. “I don’t feel that’s the concern of a majority of the town council,” Standish said.

Standish added that the proper relationship between the town and LGWCD is for the district to remain separate with the town being the dominant entity.

The district’s purpose to maintain canals and roads has changed since the town incorporated, she said.

“With the advent of the town being created, I believe there is a great deal of responsibility that should be turned over to the town,” Standish said. “Quite frankly, it has been suggested that the water district should be dependent upon the Town of Loxahatchee Groves. That may be something seriously to consider because we are putting a great deal of money toward the water district.”

“We haven’t even begun an evaluation of services to ask the people what they want and need,” she said. “We could find grants for water and sewage, possibly. If we owned the roads, we could find funding.”

Standish also believes that hedging currently done by the LGWCD could be improved upon. “The equipment they are using leaves some of the branches in the trees very barbed and pointed,” she said.

She would like for Okeechobee Blvd. to remain two lanes with equestrian trails on both sides, equestrian crossings, landscaping and roundabouts, although she acknowledges that it remaining two lanes is unlikely.

“Some people refer to it as a rural vista,” Standish said. “I would like to see more foliage. We are an agricultural community. Even roundabouts. I don’t think we necessarily need a light, but well-placed roundabouts across Okeechobee Blvd. might work.”

However, since Okeechobee is a county road and there is development pressure, she understands that widening the road is probably inevitable.

“The county may insist that that be a four-lane road,” she said. “That’s all well and good. If we put in horse crossings now and put in our equestrian trails, it is my understanding that even as a four-lane, they will have to honor what was there previously. We as a town need to fight for that. Even as a four-lane we can have roundabouts, horse trails and horse crossings with beautifully landscaped roadways.”

As for the town’s budget, she noted that the town just spent $480,000 for the Central Palm Beach Chamber of Commerce building, but previously scheduled projects are left undone.

“We set aside $80,000 for horse crossings,” Standish said. “It was discussed, but it was never pushed. It seems that anything that is equestrian-related is cast aside unless it’s election time.”

Standish would like to see financing for more durable roads than OGEM, and for contracts to be bid out. “If we’re going to spend gas tax money putting in roads, I want to see better materials,” she said.

She added that if the town built state- or county-grade roads, it could seek financing for them. She believes that other services could be provided with outside financing and without having to spend more money.

The prevailing philosophy of the town has been “government lite,” but Standish said that the town’s relationship with the district does not follow that.

“The town has a symbiotic relationship with the district,” she said. “They are not what you would call ‘government lite.’ There are pensions involved, there is insurance involved, so we as landowners and taxpayers in Loxahatchee Groves already have an entity that is technically not ‘government lite.’”

To prepare for the arrival of Minto West, she said the town needs to have an open dialogue. She added that she spoke with Minto Vice President John Carter about equestrian trails.

“The trails are a very big issue in our community,” she said. “The safety of our community is very important, and keeping trails away from traffic. I asked him if our equestrians would be able to continue through their trails, and he said yes. He said he is looking forward to a synergistic relationship with Loxahatchee Groves. There are things that we can work on together, but we must be very cautious and we must continue to question our government and any development around us.”

Standish has done a lot of work on the town’s advisory committees, and she thinks some of the appointments by council members are to move the council member’s agenda forward and to resist other initiatives they do not favor.

“I always take the view that I am there to question, and I am there asking questions for the members of my community,” she said. “That’s where I have been called uncooperative because I dare to question what is going on, and I expect government to be accountable.”

Standish said voters should vote for her because she is for a town that is financially responsible and concerned about preserving its rural identity, which provides quality services and safe areas to walk and ride, and is concerned for every resident in the community, not just developers and investors.