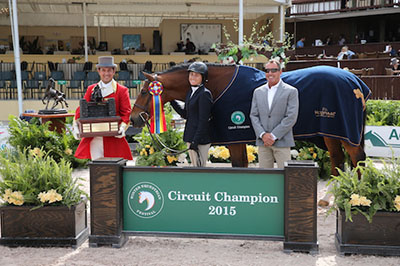 Equestrian Sport Productions is proud to congratulate all of the circuit champions for the 2015 Winter Equestrian Festival.

The 2015 circuit was a huge success, featuring 12 weeks of world-class competition Jan. 7 through March 29 at the Palm Beach International Equestrian Center in Wellington. The circuit awarded more than $8.2 million in prize money along with many other special awards. The 2015 Winter Equestrian Festival Circuit Champion Awards were presented to the top finishers in every division, based on prize money and points won.

The Chapot family had another wonderful winter in Wellington with top finishes throughout the circuit. Laura Chapot earned the award for best Overall Jumper Rider and Frank Chapot was named the top Overall Jumper Trainer. Laura Chapot was circuit champion with Bradberry in the Spy Coast Farm 1.40m Jumpers. She was also circuit champion in the Adequan 7-Year-Old Young Jumpers with Mary Chapot’s BEC Hugo.

Emanuel Andrade had a great circuit with his top horses to earn the award for Overall Jumper Owner. Among his many accolades, Andrade finished the circuit as champion and reserve in the Animo USA Medium Amateur-Owner Jumper division with C. Jack Sparrow Z and Oxford, respectively, and was presented with the Hermès Talented Young Rider Award.

Scott Stewart was named the circuit’s Overall Hunter Trainer for the sixth year in a row, and also took the award for Overall Hunter Rider this year. He was circuit champion in seven different hunter divisions.

David Gochman was named the 2015 WEF Overall Hunter Owner. Not only did he own horses ridden by Scott Stewart and his wife, but daughters Mimi and Sophie Gochman also had a great winter. The girls dominated the Coldwell Banker Children’s Hunter 14 & Under, where Mimi and David Gochman’s Romance were champion, and Sophie and his World Time finished in reserve. Mimi was also circuit champion in the Medium Pony Hunters with his True Love.

For the third year in a row, Victoria Colvin was awarded the Christy Conard Perpetual Trophy for Equestrian Excellence. The award is presented to the young equestrian who accumulates the most points in the USEF Hunter Seat Medal, USEF Show Jumping Talent search, ASPCA Maclay and WIHS overall classes. Colvin also had great results in the jumpers this year and was awarded the Pin Oak Farm Perpetual Trophy, which is presented to the junior jumper rider who earned the most prize money throughout the circuit.

Equestrian Sport Productions congratulates everyone on a fantastic 2015 circuit. For more information, including a complete list of winners, visit www.pbiec.com.