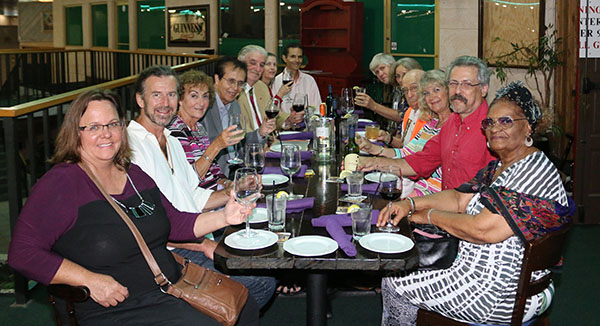 The ruling came after a long legal battle, and at a community forum meeting on Tuesday, April 21 at the original Wellington Mall, Santamaria proclaimed that the ruling was a crucial victory for honest government.

“One of the reasons that we are here tonight is for a celebration,” Santamaria said. “We won a three-year lawsuit that has been going on since 2011, which involved 15 municipalities who refused to cooperate with the Office of the Inspector General.”

The ruling was a major victory, he said.

“In 2009, the then-state attorney, Michael McAuliffe, assembled a grand jury to investigate different segments of the population — the business community, the elected officials, staff, civic leaders — to find out, if after three years, we were still ‘Corruption County,’” Santamaria said.

Twenty-one members of the community heard more than 30 witness testimonies, including an almost three-hour testimony by Santamaria. “The conclusion of the grand jury, in a 54-page report, said, ‘Yes, we are still Corruption County,’” he said, adding that the grand jury determined that it was imperative to start an Office of the Inspector General.

Eventually, with a positive public response, the seven county commissioners voted to begin the Office of Inspector General. The problem, which turned out to be critical, was that the method of financing the office was not written in the document, Santamaria explained.

The discussion, Santamaria said, always centered on following Miami-Dade’s example of charging the vendors — anyone who does business with the government — one quarter of one percent to fund the Office of the Inspector General.

“Somebody intentionally, or forgot, to put the one-fourth of a percent as part of the wording in the referendum,” he said, stressing that it was always said that the money would come through vendor fees and not taxes.

Fifteen cities filed a suit to stop the funding mechanism, and the office has been only half-funded and half staffed since 2011.

Six months ago, the lawsuit finally went to court, and Santamaria was one of the four chosen to testify. Brunson, presiding over the case, concluded that the cities were undermining the electorate by going against the will of the people, and that they were required to fund the OIG.

“That’s how we won our lawsuit, and that’s why we’re here tonight, to celebrate this victory, of ‘We, The People,’” Santamaria said, calling this the biggest victory of the people in the last 10 years.

Carey, the guest speaker at Tuesday’s meeting, agreed with Santamaria about the importance of the ruling.

“This is a victory,” Carey said. “I love that quote by Judge Brunson: ‘The people are the municipalities,’ not those elected officials who represent them. Elected representatives, just because they disagree with the vote of the people, can’t overturn the process by suing, and that was one of her main quotes to take away out of there.”

The victory, Carey explained, is huge.

“What happened after the judge ruled in the case is that the cities came back to the judge and filed a motion for a rehearing,” Carey said, noting they asked for that on March 26.

On April 10, Brunson denied the rehearing.

The battle, he reminded the crowd, isn’t over yet, and is being fought with taxpayer dollars.

Santamaria called the municipalities hypocritical, with their pleas that they cannot afford the OIG. “One-fourth of one percent is nothing,” he said.

All of the commissioners voted to charge the vendors, Santamaria said, and he has fought diligently against misinformation through conversations, community forums, advertisements and more to inform the community about this battle for an office that keeps an eye on the government.

As Palm Beach County’s second inspector general, Carey is in his first year on the job.

“My job is to weed out fraud, waste and abuse,” Carey said. “I’m passionate about it. I’ve been doing it for years. I’ve been doing a pretty good job at it. I’ve put people in prison, I’ve made arrests; we’ve saved millions of dollars for the taxpayer. But I always like to remind folks, most people in government are really trying to do the best thing. What an IG can do is come beside them and help them do business better, more efficient and more effectively.”

On Thursday, May 14 at 9 a.m., Carey will give a six-month status report to the Inspector General Committee. The meeting will be available for viewing on Channel 20.

To learn more about the Office of the Inspector General, visit www.pbcgov.org/oig or e-mail inspector@pbcgov.org.

ABOVE: Jess Santamaria gathers with friends and supporters Tuesday to toast the inspector general lawsuit victory.