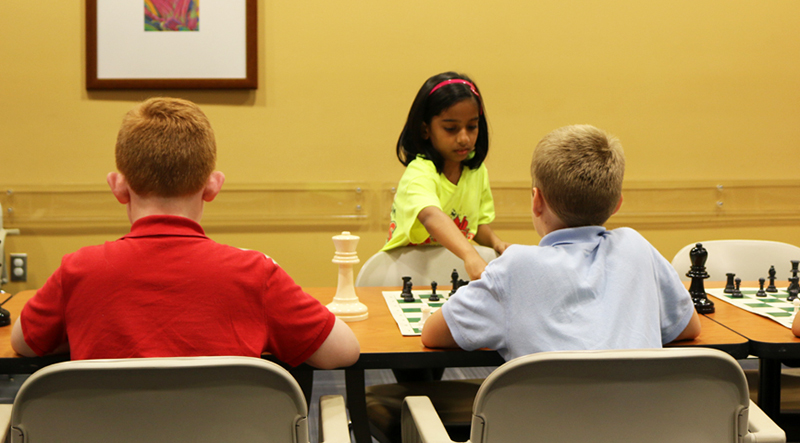 Arvaniti is on a tour of the United States from Greece, where she is the general director of the Greek Ministry of Culture, Education and Religious Affairs.

“Everyone can play,” coach and Elbridge Gale Elementary School teacher Antonis Loudaros said, as everyone took their places.

The exhibition began with the top players playing against two or three opponents at the same time. Leyva, Venkat and Behura were joined by George Zhou, Vance Varak and later Timothy and Angelo Chen.

“This is a serious event,” Loudaros said. “This is the first time ever that we have five of the absolute best players, of the top 10 players in Palm Beach County. When we say start, we shake hands, and when we say go, you start.”

They played their games and then quickly reset the boards to prepare for another round.

Of the participants, many have attended Elbridge Gale with Loudaros, and 10 are current students. Loudaros considers chess a game that teaches a multitude of skills, including manners, critical thinking and mathematics.

During the exhibition, he noticed that one chess student — Leyva, who was playing three games at once — went beyond what was asked.

“I believe chess is important because, as numerous studies have suggested, it can help with everything — life, school, you name it. It’s a lot of fun,” Leyva said. “I do enjoy chess, and the fact that I get to see these kids playing what they love, it’s time well spent.”

Behura is the first female to compete nationally from Palm Beach County.

“She has also qualified to compete in Colombia in July next year for the International Youth Games,” Loudaros said.

There are two students, Loudaros said, who have qualified to compete internationally from Palm Beach County.

“It feels great,” Behura said about being able to compete.

She has competed in Dallas, will be competing in Chicago and Nashville, and will be part of the U.S. team. “It’s really fun, and it makes me smarter,” Behura said.

At Elbridge Gale, Loudaros has 184 chess students, 51 of whom are U.S. Chess Federation members.

Dinolfo, the Elbridge Gale chess president, is thrilled with the program. “My son has learned so much from chess,” she said.

Her son, Anthony Bleeker, was one of the students who presented Arvaniti with gifts.

“I think this was a great idea on Mr. Loudaros’ part to bring chess students together and to have our top players play other students,” Dinolfo said. “It was an exciting thing. It was very challenging for the students, and they all had a lot of fun.”

She’s thrilled with the chess program at Elbridge Gale because it teaches students to work together, improves their social skills and so much more.

“I can see my son, when he plays chess on the board at home, how his mind is moving with math,” Dinolfo explained. “He’s very focused, and it’s teaching him so much about different things.”

Timothy and Anthony Chen arrived just in time to play “bughouse,” which Loudaros described as a fast-paced two-on-two game.

The exhibition was a great experience for Arvaniti, who came from Greece to learn about gifted education programs in the United States. “In Greece, we have many European programs, and we exchange teachers and ideas, and sometimes methods are applied to the educational system,” she said. “I also follow the chess program, which I like very much.”

Arvaniti has visited Palm Beach County, Miami and Boston, and is enjoying her whirlwind trip.

“I’m so glad to be here,” she said, explaining her Greek ministry role. “I am in charge of the evaluation of directors and teachers, and the training and providing direction for how to apply different programs.”

Loudaros, originally from Greece, was thrilled to have Arvaniti visit his program.

Chess is like a big family, he explained, and he continually strives to promote scholastic chess.

“My job is to promote the needs of all of Palm Beach County,” he said. “This is my passion. This is my mission in life… I love what I’m doing.”

Additionally, he is extremely grateful that Elbridge Gale’s principal, Gail Pasterczyk, is so supportive of the program.