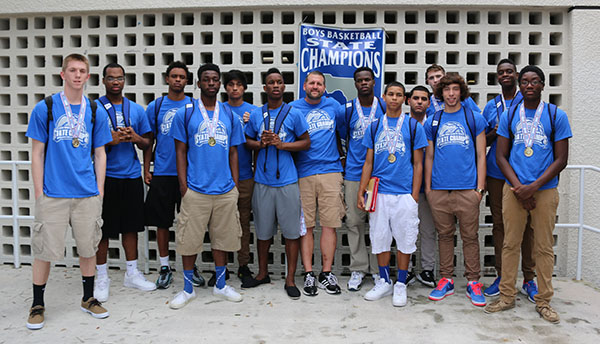 School cheerleaders, step team, twirlers and band came out to entertain the students before announcements.

The boys varsity basketball team, under the leadership of head coach Matt Colin, had a historic season, culminating in their big win on Feb. 28. The team includes two seniors, eight juniors and five sophomores.

Tennis coach Bruce Israel, who has been with the school for 13 years, was thrilled to present his students and recognize them for their accomplishments.

“I think this is going to be an annual event,” Israel said. “For the first time in Wellington’s history, our basketball team has won a state championship. I hope everyone understands what an amazing feat that is. The teams they played this year were unbelievable, and they were amazing.”

“Once again, for the first time ever in Wellington history, the boys tennis team has a state championship. These guys worked unbelievably hard, and I’ve got to tell you, the tennis that is played up at the state tournament is not only some of the best in the state, but the players up there could be the best in the nation,” Israel said.

Colin congratulated both his team and the tennis players.

“I also want to congratulate the boys tennis team, Jacq and Justin, on their state title,” Colin said. “I know how tough of an accomplishment it is that you guys did.”

The Wellington girls track team heads to the state tournament this weekend after winning its first-ever regional title, and Colin wished them luck. He also extended congratulations to the wrestling and soccer teams, which both won regional titles this year.

“We’ve had a very successful year in sports here at Wellington High School,” he said.

Frazier, Gates, Kwiatek and Dueudonne each averaged 10 or more points per game.

“The winning formula for this historic accomplishment was through hard work, sacrifice, team work, dedication and a willingness to be the best,” Colin said.

He also recognized the teachers, staff, student body and community for supporting the students as they accomplished these record-setting milestones.

Principal Mario Crocetti called 2015 the Year of the Wolverine.

“Tennis and basketball have just been a piece of that. We’re very happy to acknowledge them here today,” Crocetti said, noting that at the finals, the boys defeated Hagerty High School from Oviedo, a state powerhouse.

Many of the players are already gearing up for next season, while remembering the highlights and accomplishments of this past season.

“This is special because it’s the first time in the school’s history that we’ve made this big accomplishment… We just made everybody proud,” said Dieudonne, a shooting guard and small forward who will be back next season. “I’m looking forward to a good season. We’re going to have a lot of work to do, and we’re going to have a target on our back, but I’m always ready.”

The tennis team is also ready, with an amazing year behind them.

Sacks was just two points away from winning the state tennis title last year, competing with his brother, Trevor, who has since graduated. To him, winning the title this year was redeeming.

Sacks was able to take the experience of almost winning with his brother and use that to learn this year.

“We’ve been working our whole lives for it,” Sacks said.

Israel is proud of his team, which has brought many firsts to WHS.

“These were the individual number one doubles state finals. A major, major accomplishment. I’ve taken many players up to the state championship in the past. Up until last year, I never got anybody out of the first round,” Israel said. “The quality of tennis up there is extreme.”

Sacks made it to the semifinals of the singles and lost to the eventual state champion, Israel said, before making it to the finals and winning.

This year was the first year that Hundley and Sacks played doubles together, which makes the win even more amazing, Israel said.

Their records for the year were impressive, Israel explained.

Though the whole team did not get to the state tournament, the team played very well at districts and lost in the regional semifinal round to Vero Beach.