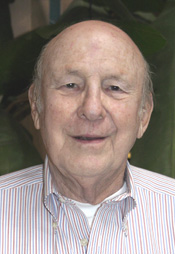 “One of the things we are doing is recognizing you for your contributions to the village over the last number of years, and it’s the village’s way of saying ‘thank you,’” Village Manager Paul Schofield told Adams, who built the Lake Wellington Professional Centre before selling it to the village in 2013.

“I asked that it be called ‘Ken Adams Way,’” said Adams, who brought his wheelchair-bound wife, Arle, with him to the May 12 meeting. “For 45 years now, when my wife has disagreed with me, she has told me, ‘You always have to take your way.’ Well, finally I got my way. Thank you very much. I can’t tell you how much this means to us.”

Adams served on the committee that drafted the original Wellington Charter, and chairs the current Charter Review Task Force. He stressed that all his work was accomplished by building upon the groundwork of others.

Adams added that he was somewhat disappointed with the legal battles and discord that has emerged over the past several years.

“More business was done in the community center that used to be our country club over that bar with a handshake, than I think all the lawyers combined are doing today, and those deals held up a lot better,” he said. “Somehow, we’ve gotta get our mojo back, and I know this board is working hard on that.”

Councilwoman Anne Gerwig thanked Adams for his continued work for the village.

“We do realize that you were one of the founders and we appreciate that, and we’re very glad to name this whatever your wife wants it to be called,” she said.

Vice Mayor John Greene said he has gotten to know Adams over the past few years and thanked him for sharing his perspective.

“You’re a great historian; you’re a great ambassador to this village,” Greene said. “You’ve recognized the commitment of public service and the value it brings to every one of us.”

Councilman Matt Willhite noted that several years ago, he made a motion to put Adams’ name on the village’s Founders’ Plaque.

“I say ‘founder,’ not that you were here picking strawberries that long ago, but once you moved here, you started to set your impact on this community, and the things that you’ve done, and the initial charter, and here you are 20 years later working on potentially revising that charter,” Willhite said. “That’s the commitment you are showing to the community.”

Willhite said that renaming the street leading to the business park will increase its visibility.

“It will really help this business park move forward because it’s hard for people to find,” he said. “When it has its own name and address, it will make it easier for potential residents and visitors to Wellington to locate those businesses.”

Willhite said he had reservations about renaming a street in honor of someone still living.

Councilman John McGovern said he had gotten to know Adams better over the past year, when McGovern’s wife, Michelle, was working on the Charter Review Task Force.

“You are a legend, and in the last months, Michelle and I have very much enjoyed our time getting to converse about the history of Wellington,” McGovern said. “As someone who has grown up here and came back here to raise our daughters, we just want to say ‘thank you’ for the legacy that you’ve left.”

Mayor Bob Margolis said Adams has been a role model and mentor for him.

“You are someone to look up to,” Margolis said. “In my time in the village, which is a long time, you’ve done more than we can ever ask for, and renaming at street ‘Ken Adams Way’ is just a token. It goes much deeper than that.”

The amendment establishes a 1,000-square-foot minimum outdoor activity area or 30 square feet per person, whichever produces the greater area. It includes language allowing the council to waive that requirement if there are unusual circumstances.

Wellington’s land development regulations previously required that adult daycare centers provide outdoor activity areas at 100 square feet per person or a minimum of 1,500 square feet. The staff report explained that the requirement was a carryover from the adoption of portions of the Palm Beach County code, which was later deleted.

The applicant pointed out that the requirement is regulated by the Agency for Health Care Administration and the Palm Beach County Health Department and is no longer appropriate.

Former Planning & Zoning Director Tim Stillings said the minimum square footage requirement will include both child and adult daycare facilities, and any waiver request would go before the Development Review Committee and the Planning, Zoning & Adjustment Board before coming to the council. Willhite had made those requests the previous day at the council’s agenda review meeting.

“You’d have their recommendations as well as the applicant’s demonstrations to base your decision on,” Stillings said.

Greene asked whether the county had retained any portions of the minimum space requirements for children in its code, and Stillings said it had.

Gerwig made a motion to approve the ordinance as amended, and it carried 5-0.