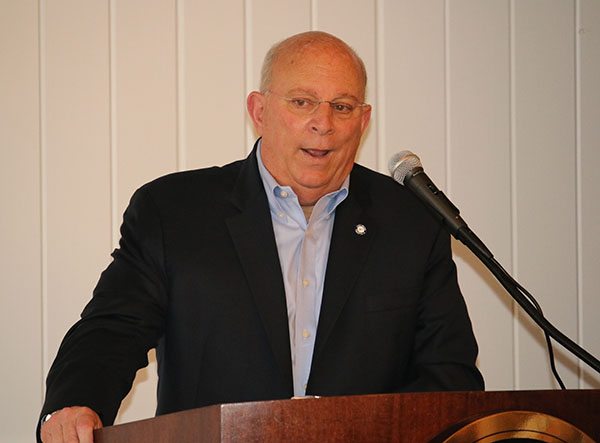 Margolis was a last-minute substitute for State Sen. Joseph Abruzzo (D-District 25). Wellington Chamber Executive Director Michela Green thanked Margolis for his accessibility, giving him kudos for the ability to shift gears and speak at the last minute.

She also thanked attorney Alec Domb, who stepped in to sponsor the luncheon. “We’re very fortunate to have these men in our presence and in our chamber,” Green said.

The chamber is one of the many things that makes Wellington special, Margolis said.

“One of those issues was, how does Wellington fit in and become user-friendly with our business community?” he said.

The council, he said, sat down and asked how to let the business community thrive and prosper.

“We need to ask the business community more about what they want,” Margolis said. “We need to reach out and work together with them.”

Wellington needs to do a better job of providing incentives to businesses, he said, other than offering to expedite permitting.

“My goal always, even sitting on the council before, was to bring a medical school here, and a nursing school and a pharmacy school,” he said. “Hopefully, we’ll do something with the medical arts district.”

“Not only are we open to ideas; we’re pleading with the chamber for ideas,” Margolis said. “We can tell you what we think we want, but you all know what you want… Hopefully you’ll see us expanding that desire to open up our doors and ask you for assistance and expertise.”

As far as the future of the controversial K-Park land, the council decided to ask the business community the best route to take. Eventually, it came down to six applicants.

“The council looked at all the applications and decided that we weren’t going to do anything with it,” Margolis said. “We believe, and I believe, that our intentions were honorable, but the actions that we did left some opportunity areas.”

Residents, he said, mostly shared what they didn’t want.

“Right now, the applications are dead. We are doing town hall meetings,” he said, noting that during the meetings, residents were given a voting device. “We learned a lot, and we’re going to have three more K-Park meetings to see what our residents want.”

The mayor said he’d like to keep half the land as a park, but also have an entertainment center where residents can participate in activities.

“As far as K-Park is concerned, we’re looking for input,” he said. “The one core theme we did receive is that we need a hotel.”

On the controversial canal clearing project, Margolis said that residents saw stakes going up on the grass near the canals and were upset. The canals were cleaned starting with the worst, but public outcry has halted the progress.

“The canal clearing is dead. We’re looking at alternative ways to do it. We can tell you that the village owns 25 feet of the property behind those homes,” he said.

One possible problem, is that if someone gets hurt on a tree that is there, the village is liable. There might be a waiver that the village brings to residents, he said.

“If somebody climbs up your tree, on our property, you’re responsible for that,” he explained.

Margolis also noted that the village is in discussions with the owners of the Binks Forest Golf Club to see if a village purchase is viable, and even about whether the village should be running a municipal golf course, he said.

“We get up in the morning, and we just want to do the best for the Village of Wellington, and that includes the business community,” Margolis said.