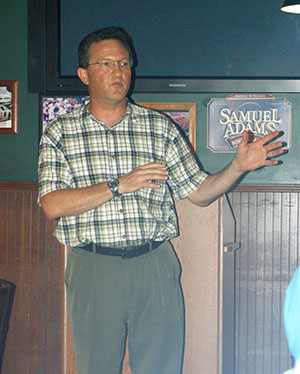 A pre-emptive strike was filed in Leon County Circuit Court on Monday, June 22, claiming the Florida Legislature and Gov. Rick Scott violated the state constitution by failing to comply with Amendment 1, the Water and Land Conservation Initiative, which was overwhelmingly approved by voters last fall.

“The lawsuit was filed today, before the governor even signed [the budget],” State Rep. and Minority Leader Mark Pafford (D-District 86) said while addressing the Mid-County Democratic Club’s meeting in Royal Palm Beach that evening. “Roughly 78 percent of voters in Palm Beach County, and 75 percent in the state, felt Amendment 1 should have used our dollars to purchase land we need to conserve.”

However, that was not what happened, he said.

The lawsuit was filed one day before Scott approved the $78.7 billion state budget — a total that was $461.4 million less than approved by the legislature after he vetoed a number of items, including a controversial $2 million-plus earmarked for a sports facility in Bradenton, $15 million for a downtown Orlando campus of the University of Central Florida, $300,000 for a Holocaust memorial for Miami Beach and many other projects.

The 10-page lawsuit was filed by EarthJustice, a nonprofit public-interest law firm that has represented environmental groups in more than 20 years of lawsuits over restoration of the Everglades, on behalf of the Florida Wildlife Federation, the St. Johns Riverkeeper and the Environmental Confederation of Southwest Florida. House Speaker Steve Crisafulli, Senate President Andy Gardiner and the entire legislature are named in the suit.

“The constitutional amendment is clear,” EarthJustice attorney David Guest said in a statement. “A third of the tax on real-estate deals is to be used to prevent every last inch of Florida land from getting chewed up by development. But most lawmakers are simply not listening. That’s why we have to go to court.”

The legislature did not do what the amendment requires, added Manly Fuller, president of the Florida Wildlife Federation. “Seventy-five percent of Florida voters approved this amendment last November, and they were clear that they want the state to buy conservation land,” Fuller said. “Instead, the legislature took the money and used it for things it should not be spent on. This is a slap in the face to Florida voters, and it should not stand.”

The Water and Land Conservation Amendment requires that, for the next 20 years, 33 percent of the proceeds from real estate documentary-stamp taxes go to manage, protect and acquire land and water for conservation purposes. For the upcoming year, the share of the real-estate tax is projected to bring in more than $740 million.

In a statement issued Monday night, Crisafulli said, “The fact that the legislature received news of the lawsuit from the media reveals much about the plaintiffs’ motivation. The legislature complied with both the spirit and the letter of the constitution, and we look forward to defending against this politically motivated lawsuit.”

According to Gardiner’s office, several major environmental projects were financed from the Land Acquisition Trust Fund and other revenue sources, and were included in the budget sent to Scott:

• Beaches: $32.1 million. State financing will leverage over $100 million in local and federal funds.

• Land acquisition: $55 million. This includes $20 million for the Kissimmee River, $32.4 million for Florida Forever programs, of that $15 million for Rural and Family Lands, and $2.6 million for other land purchases.

“At the end of the day, more than $700 million would have been allocated for this new idea [of purchasing, managing and protecting land],” Pafford said. “It’s outrageous the state did this.”

The lawsuit contends that instead, the legislature “misappropriated” more than $300 million of the money and devoted it to purposes not allowed for under the Land Acquisition Trust Fund. The lawsuit seeks a declaratory judgment finding that the legislature has violated the state constitution by misappropriating that money.