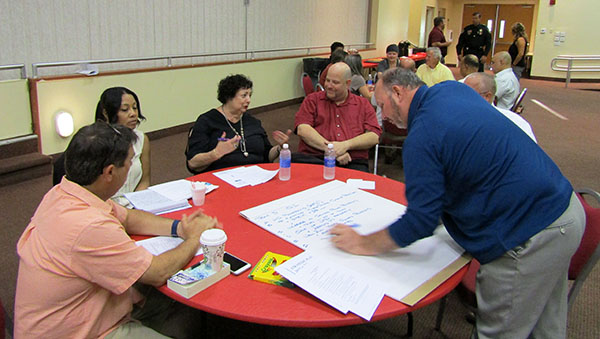 These meetings, which have been facilitated for the past several years by consultant Lyle Sumek, gather ideas for the village’s future as its strategic plan is updated.

Village Manager Ray Liggins said the process started several months ago with questionnaires distributed to department heads, advisory committees and council members, which were then forwarded to Sumek.

“This information is incorporated into a document that is used to update the plan and keep it going,” Liggins said. “We think this is very important in creating that vision we have for our community.”

Sumek said the format for the meeting had not changed. Attendees break into groups and compose charts based on their ideas for the future. Council members and village staffers rotate to each of the tables, primarily to listen.

“The strategic plan starts out with a vision and goes out 15 years,” Sumek said. “We look at what you want to be and what is the preferred future.”

The exercise then falls back to five years in the future, and yearly goals to get there.

“We take that into a one-year itinerary of things that Ray and his staff are going to do, and you can actually see their progress during the year,” he said, explaining that the input will be used not only for strategic planning, but also in the budget process.

Sumek said he travels to different municipalities facilitating planning meetings, and that this year the ideas have been more positive as the economy has improved.

“I was just working the last three days in Boynton Beach, and for a couple of years, they had basically no residential building permits,” he said. “All of a sudden, they’ve got more than $150 million started in the last four months. That is a real drastic change. It’s had an impact on local governments because the bid prices on construction are going wild, so there are some direct impacts of the growth that we’re seeing here.”

Sumek explained that the ground rules for the meeting keeps the role of elected officials small.

“If they talk too much, just give me a high sign, and I’ll come and tap on them,” he said. “The role of staff is to listen. They’re really there to learn from you. This is your time to get your ideas out. Crazy ideas are OK.”

“What I would like you to do after you’ve recorded all your answers for each question is have you turn your pad around and have everybody vote to determine which of the four or five are most important to your group,” he said.

The first round of discussion was for participants to look at the village today: “Looking at the last year, what do you identify as successes of the village?” and “Why did you make the choice to live here, and why do you stay?”

“They’re part of the public record,” Sumek said. “You can sign your name, or you don’t need to, but at the end, you get to write anything you want, so relax and have fun.”

Through previous visioning meetings, the village developed a vision for 2030, which is to be a premier residential community with a hometown feel; the choice for all family generations that is beautiful, safe, convenient and enjoyable.

The 2020 goals developed were to have a financially sound village government that is responsive, with community-based village services and facilities, an abundance of leisure choices and options, and a more livable community from “curb appeal” to convenience.

The top-priority action for fiscal year 2015-16 for a financially sound village government was to reduce the tax rate. Top priorities for the management agenda were the Palm Beach County Sheriff’s Office contract and developing a general fund revenue projection model.

Objectives for an abundance of leisure choices and options included maintaining existing parks at a high level of service, expanding recreation programs and services for Baby Boomers, developing more venues at Commons Park, developing additional park venues, and expanding the number and quality of community events.

Top priorities for a more livable community included pursuing the development of a senior living complex and a senior housing ordinance, the Crestwood redevelopment site and advocacy for the State Road 7 extension.

ABOVE: Residents break into small groups to discuss priorities for the future.