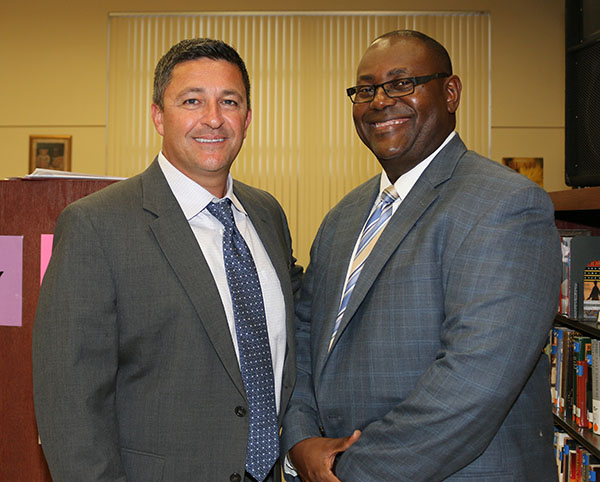 Avossa’s appearance was part of a countywide tour that has taken him from Palm Beach Gardens to Boca Raton to Belle Glade as he orients himself to his new job.

“Welcome to the superintendent’s community tour,” PBCHS Principal Darren Edgecomb said to an audience of more than 250 people.

“I looked at his credentials and his accomplishments, on how he had improved student achievement and success for all children, and I was truly excited. Then I noticed he was from Florida,” she said. “When I saw his graduation rates, how he improved them, how he worked to make sure every student had an opportunity for success… [I realized] he’s on the ground and making it happen in the community.”

Avossa, unanimously hired for the post in April, began work this month. Previously head of schools in Fulton County, Ga., Avossa noted that he was recruited for his new position; he hadn’t been searching for a job.

Avossa has worked as a teacher, assistant principal and principal, and has learned the ins and outs of middle and elementary schools, as well as the K-8 structure.

“These are large, complicated systems,” he said, explaining that there are more than 22,000 employees with a budget of more than $2 billion.

Avossa said he studied under the Broad Center’s academy program to learn to manage such an intricate system. In Fulton County, they used a modified zero-based budget, he said, explaining that he wants to look deeply into the budget to determine how best to utilize funds.

“We’ve got to work together to identify the great things that are happening. I want to know what you think is working and what needs to be left alone,” he said. “I’m not coming to you with a solution, looking for a problem to attach it to. I’m coming to you and asking you what’s working and what’s not working. What I should be focused on as superintendent?”

Avossa suggested that attendees visit the school district’s web site at www.palmbeachschools.org and pull up his 13-page 90-day plan to learn about his approach.

“I’m going to listen and learn from you first, and then I lead,” he said.

He likened the plan to a cookbook, saying that it will be created collectively, based upon what everyone decides is important and what solutions exist.

Avossa said his goal was to explain to the crowd who he is as a person, and he started with his Italian heritage.

“I am an immigrant to the United States,” he said, explaining that for years as a child, he was ashamed that he could not speak English, ashamed of his parents’ accents, and didn’t want people to know his origins.

He is now a naturalized citizen. “The one thing [my parents] wanted more than anything else in the world was to go to school, and they couldn’t,” Avossa said. “I am passionate about education because education changed the trajectory of my life and the life of my kids. My kids are going to have a great life because my family took the risk and came to live out the American Dream.”

Avossa said he always worked with the kids who didn’t fit in, because he believes everyone has the right to a high-quality public education.

In Fulton County, he had to tackle difficult issues about race and class. “Once we do that, once we get past that, we get to solutions and stop making excuses for kids,” he said.

Avossa said he has high expectations and offers support for his teachers.

“I have to hold you accountable for your work,” he said. “I’ll tell you what’s going well and what’s not going well, but then I’m going to turn around and tell you how I’m going to support you so we can improve the outcomes we’ve just identified.”

Avossa said that ways need to be found for teachers who excel to advance so that they have the potential for career growth.

He also asked for honest feedback. More than 100,000 people will have provided information on what they do or don’t like within the system, he said, what needs to be changed, and what he should focus on, when his tour is over.

The audience broke into groups and discussed the four questions posed by Avossa for the tour: 1. Describe the best of Palm Beach County schools. 2. What are the challenges facing the Palm Beach County School District? 3. What do you think will make the school district stronger? and 4. What are the most crucial areas where Avossa should place his focus?

Group representatives came to the microphone to share their members’ insight. Some of the answers included that students should be involved in the decision-making about what choice programs are available, with students suggesting incentives to take more difficult classes, plus industry certifications and programs being available to prepare them for careers.

Royal Palm Beach High School and Palm Beach Central High School’s student government presidents also spoke, suggesting that students be taught to learn, rather than how to score well on a test. They also suggested more partnership and internship opportunities as a means of college and career preparation.

Students gave kudos to the school district for the programs available, the specialty schools, opportunities to excel and the ability to join in choice programs and academies. However, they did point out that meeting the needs of students who are on different levels of learning required more flexibility.

Providing choice programs at all schools was also suggested, as well as having meetings such as focus groups with board members and the superintendent.

Andrews said she was impressed that Avossa wanted to hear the opinions of teachers, parents, students, employees and everyone in the county before crafting a strategic plan.

“Finally, I got a letter!” Avossa said, pulling a school sports letter out of his bag.

Before the meeting ended, Avossa pointed out that it had been more than 20 years since an outsider came into the district in his position, and that, for more than 30 years, there hasn’t been a superintendent who had some of his own children in the school system.

He said he is able to see how the school supports the families, but has the opportunity to learn, from both the student and parent level, what works and what doesn’t.

Last year, Avossa said, for his son’s 12th birthday, he wanted a pair of sports sneakers. Avossa had expected to go to a brick-and-mortar store, but his son wanted a pair of shoes completely customized, down to his own team’s logo. They were delivered to their doorstep within days.

“That same child shows up in our classroom, and he is expecting his world to be as customized and as personalized as the world in which he lives,” Avossa said. “And yet we are this gigantic bureaucratic system, well-meaning, developed for efficiency and standardization and compliance.”

That model is not working for all kids, he noted.

Avossa cited personalizing learning, continuous achievement and competency-based education as the methods he believes in.

“How are we going to change this system to meet the needs of a broader group?” he asked as the meeting ended.