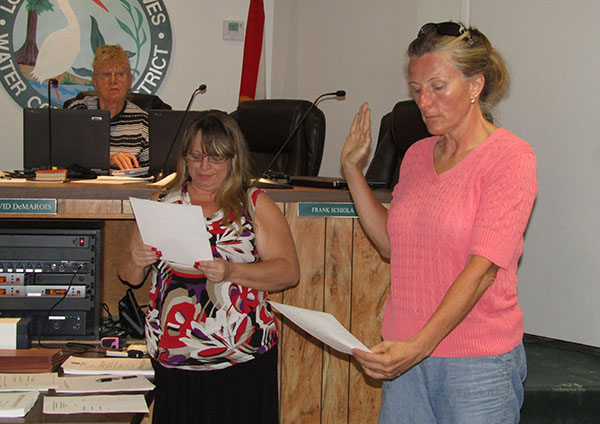 Laura Danowski was elected Monday to the “qualified elector” seat on the Loxahatchee Groves Water Control District Board of Supervisors, replacing 15-year incumbent Robert Snowball by a vote of 98-80.

The seat is the only one filled on the board by a vote of qualified electors, rather than through the one-acre, one-vote process used for the other four supervisors. A qualified elector is a registered voter who also owns property.

Snowball said it had been a pleasure serving on the board over the years.

“I’m hoping to turn my loss into a positive, because now Laura has in her hands the power to show everybody out here that none of you guys up there are corrupt, and nothing crooked is going on,” he said, calling attention to allegations that had been circulated during the campaign. “I’m calling on [her] to learn your position, learn these guys you’re working with and let these people know there’s no one corrupt up there. They’re just all good guys, all trying to save us money.”

Danowski said she looked forward to working with the other members of the board and becoming an asset to the district and the town.

“Part of my being up here is to be a voice and a conduit for the people of Loxahatchee Groves who don’t necessarily understand how things work and where numbers go and how they’re applied, and how decisions are made,” she said. “That is, indeed, a part of my mission for running and wanting to be here.”

Marge Herzog chaired the district’s annual meeting, which was called to order after a day of voting at the district office. Herzog thanked Snowball for his service and congratulated Danowski. Independent auditors Rampell & Rampell monitored the election and tabulated the results.

During the meeting, David Caplivski of Grau & Associates gave the annual financial report, announcing that the district had a clean audit opinion for the fiscal year ending in September 2014, with no deficiencies or internal weaknesses.

Expenditures for 2014 were $2,107,026, which represents an increase of $476,296, or 29.21 percent, compared with 2013. The increase was primarily due to ongoing road improvements and the purchase of two heavy machinery items for current and future road maintenance projects.

Personal services accounted for 55 percent of expenditures, with operating costs at 32 percent, capital outlay at 20 percent and debt service at 19 percent.

In her attorney’s report, Mary Viator said issues with the aquatic vegetation control contract had been a large part of her activities. The district wound up purchasing its own aquatic control vehicle and equipment, training staff to operate it after continuing dissatisfaction with the contractor.

“There was a second FEMA appeal that was filed with the Florida Division of Emergency Management,” Viator said. “There has been a one-year delay on the initial submittal of their actual review. That, however, is not unusual. Actually, it’s a good thing that, in fact, they haven’t said no yet. They’re still in the process of considering it.”

Another major challenge for the district was two local bills that were passed by the state legislature in 2014. One provided for the dedication of paved roads and right-of-way easements to the town. “Discussion is ongoing in relation to this special act,” Viator said.

The other provides for the dedication of canal maintenance easements for use by the public as recreational trails, which she said was accomplished through an agreement approved last month between the district and the Town of Loxahatchee Groves.

“You obviously saw a lot of equipment moving around, and we were able to clean out quite a few of the canals,” Noth said. “I think that worked out quite well.”

Erdman Anthony also worked on revising the district’s FEMA flood maps, which got a significant number of homes out of the flood zone.

Erdman Anthony has also been attending quarterly special district meetings instituted by County Commissioner Melissa McKinlay. “Those are a great forum for the western communities to come together and go through needs,” Noth said. “We have another one coming up in July.”

The company is also working on the canal maintenance maps in preparation for the recreational trails.

LGWCD Administrator Steve Yohe said his responsibility includes coordinating the professionals who just gave their reports. “I don’t really have a lot to add,” Yohe said.

He noted that his primary responsibility is to report to the supervisors, respond to them and make recommendations, and to oversee the field and office teams, made up of nine members, including him.

One of his biggest current projects is developing fill, road and drainage policies. “We have apples, oranges and grapefruits out here in regard to the drainage problems,” he said. “It’s a bit of a problem in trying to address each of the individual problems.”

Yohe said he is also working with Erdman Anthony in developing cost-saving methods of culvert replacement, plus constantly evaluating and repairing the three outfall structures. “They have served the district well, but they are aging, and they are going to have to be evaluated for replacement at some point,” he said.

“The deeper the water, the less chance the weeds get to grow,” she said. “I do also have experience with companies that provide a pelleted microorganism — dump it in the canal, let it eat the sludge. As your sludge goes down, the water level goes up. It’s just another method to incorporate so we don’t cannibalize the little bit of water that we have.”

After Danowski’s swearing-in ceremony, the board reconvened in a special meeting to briefly discuss the 2015-16 budget.

Yohe noted that the district anticipates receiving $93,738 from the town in gas tax revenue.

He added that the district must report its Truth in Millage rate to the property appraiser’s office no later than July 24. The district’s next regular meeting is July 13, when the final proposed budget will appear for approval.

During supervisor comments, supervisors John Ryan, Don Widing and Frank Schiola all welcomed Danowski to the board.

“We hope she’ll pay attention to the district’s enabling legislation and history and operations, and take the time to understand the workings,” Ryan said. “I think if she’ll take some time to visit with Steve Yohe, she’ll have some very beneficial discussions, particularly with respect to the budget.”

“I’m glad to be here with you,” Widing added. “I hope moving forward that we can earn your trust and confidence, and that we operate in full transparency.”

Schiola extended his welcome also, and said it had been a pleasure working with Snowball.

LGWCD Chairman Dave DeMarois thanked Snowball for his 15 years of service. “Loxahatchee Groves is a better place because of you,” he said.