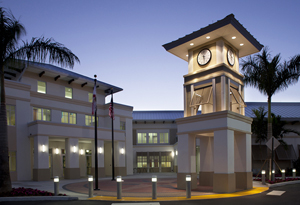 Wellington residents have until Aug. 24 to submit their opinions on the village’s financial future as part of the online 2016 Budget Challenge.

Preliminary results compiled Aug. 3 show that residents’ priorities are pretty much in line with the preliminary budget priorities that the Wellington Village Council approved July 14.

Quickel explained that Wellington staff members have been reminding residents to participate in the Budget Challenge during the recent K-Park workshops and other meetings. The online survey includes a question about residents’ priorities for K-Park regarding family entertainment, recreation and culture, including possible tax increases.

“There is also a question regarding their top priorities,” Quickel said. “Residents are asked to select their top three.”

The 200 resident responses tallied so far list flood control as the top priority at 19 percent, law enforcement at 16 percent and neighborhood safety at 15 percent.

“Those are clearly ahead of the next ones, so that has been consistent with what we saw last year in that area, as well, with flood control as the top priority, along with continued support for roads and pathways maintenance, as well as very strong support for law enforcement and public safety,” Quickel said. “Recreation and park programs were also listed as a very important part of our overall budget.”

Opportunities for general comment are also available, although those have not been tabulated yet, she said, adding that residents seem pretty satisfied.

Asked about the village’s landscape maintenance program, 61 percent of respondents support it, 55 percent support the parks and recreation program, and 73 percent believe their basic recreation needs are being met and that facilities and locations are convenient.

The current law enforcement level and spending is supported by 61 percent of respondents. Asked which one element would make a safer neighborhood, 46 percent said increased street lighting and 36 percent cited neighborhood watch groups.

Asked about the road maintenance program, 53 percent said they support the current paving program, 26 percent were neutral and 15 percent said they did not support it and advocated using the patch-and-seal method that has been used the past several years.

“Probably the most important part right now: Wellington’s policy is to maintain at least 80 percent of its roadways at good or better condition, based on industry quality standards,” Quickel said. “You hear us speak of how we maintain our roads; you’ve heard us discuss crack sealing. There’s an economic benefit to that, but there are concerns with the aesthetics. This gives the residents’ perspective of that.”

Seventy-five percent of seniors said they were not seeking alternatives to their current living arrangements.

“We’ve had a lot of focus on seniors and caring for them in the last few years,” Quickel said. “From information and surveys that we conducted before through our Department of Community Services, seniors appear to be more interested in aging-in-place services, not necessarily different household living situations. This speaks to some extent supporting those things that we’ve seen and the services that they’re interested in — home rehabilitation, senior transportation and educational exercise programs.”

The 2015-16 budget calls for keeping the ad valorem tax rate at the current rate of 2.45 mills, an Acme Improvement District drainage assessment rate unchanged at $230 per unit, and solid waste assessments of $140 for curbside and $105 for containerized service, which is $20 less per customer than last year.

The total budget of $79.05 million is an increase of $2.10 million, or 2.7 percent, which proposes a total of $6.6 million in capital projects to include drainage, road and building improvements.

While the 2.45 millage rate is the same as last year, it is above the rollback rate and is anticipated to raise an additional $1.48 million due to rising property values, for a total of $16.16 million in ad valorem revenue.