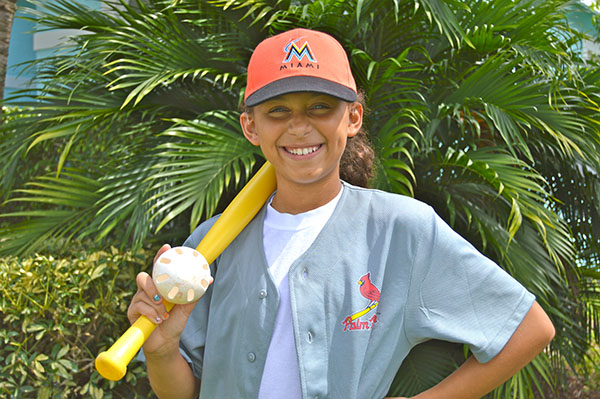 A student at Binks Forest Elementary School, Noelle created Noelle Cares for Kids as a community service project while a fourth-grader.

“This past spring, she decided instead of doing a lemonade stand or something, that she wanted to start a little program within our foundation to help other kids who are deaf and hard of hearing get cochlear implants and other services they need so that they can hear,” said her mother, Lisa Pride.

Noelle, like her father, was born deaf. She, however, utilizes bilateral cochlear implants to allow her to hear. Her father reads lips and uses a hearing aid. As a sports figure, he also made history when he became the first deaf MLB player in the modern era.

Curtis and Lisa Pride started the Together With Pride Foundation to help hearing-impaired children while Curtis was still playing baseball. The foundation creates programs to support the abilities for children with hearing impairment to improve their self-esteem and learning of life skills.

In the past, the foundation has hosted Wiffle Ball games in Wellington. Now, explained Lisa, Noelle wanted to get involved with the foundation. Noelle, with her parents’ assistance, created Noelle Cares for Kids as a subgroup within the foundation.

This year, the Together with Pride Foundation, Noelle Cares for Kids and the Village of Wellington are working together to coordinate the Wiffle Ball tournament. Money raised will go toward helping children in need of implants and audio-verbal therapy.

Ryan Hagopian, athletics manager with the Village of Wellington, was especially impressed by Noelle’s mission.

“We had, in the past, done tournaments with Curtis,” Hagopian said. “She came in and gave a presentation to myself and my director. We just thought that this was a good thing for us to be involved with and for us to help out with. Especially coming from a 10-year-old to think up and give the presentation and write her own slides — the whole nine yards — we were very impressed, and we thought that this would be a good opportunity for Wellington to help out.”

Hagopian noted that there aren’t many deaf and hearing impaired fundraising events in the area.

The idea of a Wiffle Ball tournament is not new to the foundation, but now the tournament is for kids. Lisa explained that Noelle knew right away what she wanted to do, and even came up with the name Noelle Cares for Kids.

Having a kids’ version of the foundation’s tournament was important to Noelle, especially because she is a kid herself.

“I’m excited about the Wiffle Ball tournament and raising money to help other deaf and hard-of-hearing kids,” Noelle said. “I would like every child to be able to hear.”

Her goal is for her fellow kids to have a good time while doing something good for others.

Over the years, the implants that allow Noelle to hear have gotten increasingly better, her mother explained.

In the past, they were large and cumbersome. When Noelle was a baby, she had surgery on one ear, and then after she turned 1 year old, surgery on the other. Part of the device was implanted into her ear, and then the other part gets put on externally. The pieces work together to bypass the damaged part of her ear, allowing her to hear.

Whether it is allowing someone to hear again, or for the first time, the surgeons the Prides go to in Miami truly change lives. However, the implants are expensive. With their insurance, the outer part of the device costs $10,000.

“What’s recommended with getting the cochlear implant is having audio-verbal therapy, which is similar to speech therapy,” Lisa said. “It’s so you can learn to hear, rather than learning to speak.”

Sometimes insurance covers the therapy, but it can also be a few hundred dollars. Children are recommended to participate multiple times a week.

For instance, Lisa explained, just having the implant is only part of the battle. Learning how to use it, and how to understand the noises, is the other part of being able to hear. The brain changes to interpret sound.

“A lot of kids, and adults, if they don’t have some kind of audio-verbal therapy, then they get really discouraged,” she said. “They don’t think it works.”

The deadline to register is Sept. 21. The tournament begins at 10 a.m. on Sunday, Sept. 27 at Village Park (11700 Pierson Road, Wellington). Registration is $80, with four players per team. To register, visit www.togetherwithpride.org. For more information, call (561) 801-1001 or e-mail togetherwithpridefoundation@gmail.com.

ABOVE: Ten-year-old Noelle Pride, founder of Noelle Cares for Kids.