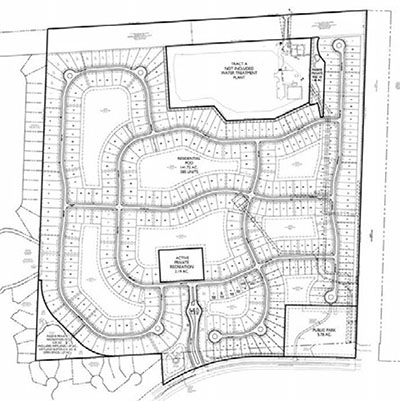 Lennar was chosen by the village to purchase the site at 980 Crestwood Blvd. after the council put out a request for proposals last year.

The actions allow the construction of a planned unit development of 385 single-family homes, or 2.5 homes per acre, which is half the allowable five units per acre under the village’s R3 zoning designation.

The maximum building height will be 32 feet and two stories. Primary access will be on Crestwood Blvd. Recreation space will be 10 acres per 1,000 residents, or 11.5 acres based on three residents per home.

The applicant plans to dedicate 5.5 acres at the southeast corner of the property for public recreation to satisfy half of the village’s recreation space requirement. The other half will be at three private recreation spaces within the gated development.

The housing design is generally consistent with homes in other developments in the area, O’Brien said.

Brian Terry of the Wantman Group, representing Lennar, said that the proposal closely follows the development plan submitted by the village, and that he has been working with neighboring residents in Saratoga on a 10-foot landscape buffer along the edges of the development after some residents expressed concern that new two-story homes would be visible from their homes.

“Lennar worked very hard to maintain consistency with the village on this original development plan,” Terry said. “There were some concerns raised by the residents adjacent to us with the landscape buffer. Keep in mind that the village code does not require a landscape buffer between single-family homes.”

When the Wantman Group was working through the final design with Lennar, he said they worked the 10-foot landscape buffer into the plan, which would be a hedge, fence and some trees.

“Through a conversation with Saratoga, they brought some concern with that,” Terry said. “We subsequently went back with an alternative design, and ultimately what we’ve done is we’ve shifted the fence back into our parcel a little bit so that we can do the maintenance of our hedge and fence.”

“The material will create more of an opaque buffer, as opposed to the trees that would take some time to grow in and create that separation between the existing homeowners,” Terry said. “They are our neighbors, and we’re trying to do everything we can to work with them on their concerns. This is what we proposed at their last HOA meeting, and we believe that we have overall consensus.”

“This is consistent with the village’s original plan,” Terry said. “We’re very excited to be here. It’s exciting that we’re at this point where we can finally have an approval.”

Terry did raise a concern about one condition requiring that street lighting be in place upon completion of the project. He pointed out that they have a contract with Florida Power & Light to do the street lighting, but they have no control over the time frame.

Councilman David Swift said he understood, pointing out that the village has had the same issue with FPL.

Councilman Jeff Hmara asked whether that was possible, to limit two-story homes, and Liggins said that Lennar plans to market the development with the models that fit on those lots.

“The models that fit on those lots are a combination of single-story and two-story homes, and restriction of that could affect them financially,” Liggins said.

Terry said that it had been anticipated from the beginning that Lennar would have the ability to build one-story or two-story homes within the entire property.

“That’s how the project was contemplated, and that’s what the expectation has been from day one,” he said. “We have heard these concerns from the residents of Saratoga and, again, we’ve met with them on a couple of different occasions. I want to make sure everyone understands that along the Saratoga side, there is a 50-foot-wide platted landscape buffer easement on those properties. That was done when the property was originally platted. Again, we’re providing an additional 10-foot landscape buffer.”

He also pointed out that the areca palms and sea grapes will quickly grow to a height of about 20 feet.

“There is not a window on a two-story home that’s going to be above 20 feet in height,” he said. “There is not going to be potential for a homeowner to view out their window and look across potentially into the privacy of another home.”

Village Attorney Jennifer Ashton said that any condition must be based on a true impact.

“It cannot be an arbitrary condition,” Ashton said. “I have not heard anything stated tonight to say that that would not be arbitrary.”

Swift said the builder has the option to provide a variety of homes. “It’s really a market issue,” he said.

ABOVE: Lennar’s plan closely follows RPB’s original request, with access from Crestwood Blvd. and a public park at the southeast corner.