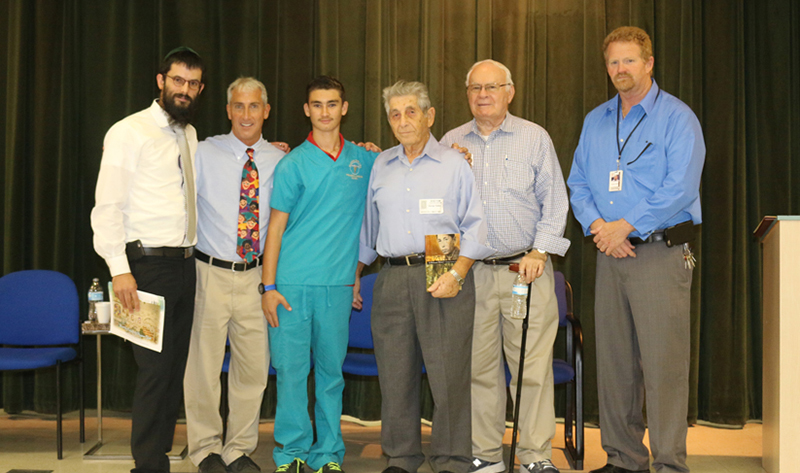 Principal Robert Hatcher thanked teacher Steve Gordon for organizing the event. “I will tell you, the life lesson, and the lives these gentlemen have lived, does not compare to anything that you, me or Mr. Gordon, can comprehend,” Hatcher said. “What happened to them as children, your age, they will talk about that today, will probably be the most powerful thing that you have heard in your life… I want you to hear what was taken away from them and what was done to them.”

Gordon explained that the program shows what happens when a person, or an entire group of people, is the focus of discrimination, racism and bullying.

Gordon’s great-uncle wrote a memoir about what happened to his brother, Gordon’s grandfather, in their small Polish village during World War I. Gordon read a passage from that memoir, where his great-uncle wrote, “Aug. 3, 1914: Sitting in the cellar, we didn’t know when it was day or night. A terrifying knocking on the door caused our blood to freeze in our veins. Five Russian soldiers came into the cellar looking for Germans. When they didn’t find anything, they made us all go into the street. We saw wasteland and death before our eyes. They gathered up 200 people, men, women and children, and with a familiar cry, ‘March, dirty Jews,’ we began to walk under the hail of bullets.”

Gordon’s family was able to emigrate to New York after World War I, but for many in Europe, moving was not possible. Millions later lost their lives in the Holocaust.

Western Pines student Chad Walker competed in an essay contest where he described his experiences with bullying, showing that religious discrimination is still alive, even here.

“Most days, in school, children make nasty comments toward me, especially because I am Jewish. I don’t understand why some people are treated differently if they participate in a different religious belief,” he said. “I have been called a ‘filthy Jew’ numerous amounts of times and by several different people. I also get made fun of because of the way I speak and look.”

Walker used to wear a yarmulke, a Jewish head covering, but stopped wearing one because of how frequently he was made fun of. He suggested that those being bullied to talk to an adult, teacher, police officer or someone who is able to help.

Chabad of Palm Beach Gardens’ Rabbi Dovid Vigler introduced the two survivors. “What comes around, goes around,” Vigler said. “And if you… choose to bully another kid, just you wait, until that comes around to you.”

Abraham Wainberg’s family was written about in the book We Remember The Children. His father was forced to work in labor camps; his family went and hid on two farms, in the fields, rather than be sent to a concentration camp.

At one point, they lived with more than 30 people in an attic, Wainberg said. One day, they heard two people walking by and talking loudly in Yiddish, which the locals didn’t understand, saying that if there are any Jews who could hear, they should get out as quickly as possible because they were burning down houses looking for Jews and valuables. Wainberg and his family fled and found another place to hide.

“The Germans did to me, they stole my childhood. Just so you understand, think of yourself when you were 3, 4, 5 or 6 years old,” Wainberg said. “You’d have a bicycle. You could go in the street and run and play. Maybe you went to the movies sometime. Maybe you even went to kindergarten. Maybe you even had a few friends to go and play with. I had none of this. This is why I say they stole my childhood, but I made up for it later.”

George Salton, who has written a book, The 23rd Psalm: A Holocaust Memoir, also came to speak to the students. “I am a survivor. I lived in a small town in Poland with my parents and my older brother,” Salton said.

His father was an attorney; his brother, who was six years older, had just finished high school.

When Salton was 11 years old, during the summer of 1939, the Germans came and occupied Poland and implemented rules to the Jewish residents of the town. He was eventually sent with his family to a ghetto in 1942, before being sent to 10 concentration camps.

By the time he was 17, when Salton was ready to give up and accept death, his concentration camp was liberated, he was nursed back to health and began his long journey toward finding his uncle in New York and becoming someone who not only wrote a memoir but has lived a productive life.