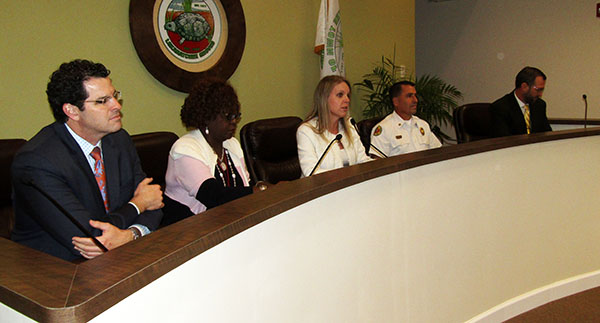 Palm Beach County Fire-Rescue Chief Jeff Collins started the discussion, announcing that the new Station 22, currently located in a rented storefront with engines kept outside, will be built on property provided by the new Westlake (Minto West) development and will be four bays with five personnel instead of three, making it a potential battalion station. Another station is planned near FPL’s West County Energy Center.

“This will be the first year that we’ve balanced the budget based on ad valorem dollars,” he said. “We will see an actual positive cash flow. We know we have to start funding more positions.”

Projects he is working on include one with Westlake’s Seminole Improvement District, a $2 million plan to provide additional water storage, in coordination with a north county project to reduce discharge to the Lake Worth Lagoon and restore water flow to the Loxahatchee River.

“This will capture stormwater otherwise lost to tide,” Pettit said. “The ultimate goal is to benefit the north fork of the Loxahatchee River.”

Palm Beach County Legislative Affairs Director Todd Bonlarron said that he and his staff have spent a lot of time in Tallahassee pushing back on the state’s attempts to compromise home rule authority and keep local growth management policy in place.

Bonlarron said that the legislature will be back in session on Jan. 12, and he and his staff will be there to try to get legislation favorable to the county enacted and block unfavorable legislation.

“Oftentimes what doesn’t happen in Tallahassee is more important than what does happen,” he said.

A key component for them is controlling agricultural enclave legislation enacted originally on the Westlake property, proposed by Callery-Judge Grove before it sold the almost 4,000-acre tract to Minto. “We worked seven or eight years on that, but it became law,” Bonlarron said.

Their recourse has been to sit down and work with local developers to try to create more friendly relations with them in order to keep the decisions local, rather than having them pursue favor from the state through ag enclave policy.

“We feel good about going into this legislative session in regard to issues in the western communities,” Bonlarron said.

The county is continuing its pursuit of missing funding for the J.W. Corbett Wildlife Management Area levee that will provide additional flooding protection in The Acreage. That project got underway with partial funding from the state after the existing levee was almost breached after Tropical Storm Isaac.

He added that the Seminole Improvement District project, which will direct water from Corbett northward via the Mecca Farms property, will also help control flooding.

Bonlarron’s staff has also been working with Palm Beach State College on development of the new Loxahatchee Grove campus.

The state recently released a budget of $79.3 billion, which is 1 percent greater than last year, but with a greater local tax burden on the Palm Beach County School District. The state is also talking about close to $1 billion in tax cuts to corporations. “It’s going to be a long 60 days,” Bonlarron said.

Another difficult discussion will be how to allocate funding for the Amendment 1 referendum approved by voters last year to acquire environmentally sensitive areas. The legislature allocated the money largely for staff salaries rather than land acquisition, which led to a lawsuit by environmental organizations. “A lot of environmentalists wanted to see more purchase of public lands,” he said. “The legislature had a very different idea.”

Palm Beach County Administrator Verdenia Baker, who lives in Royal Palm Beach, said she spends a lot of time in the western communities and is trying to control growth that would negatively affect the area.

“I love this county, and I’ve seen the development. I want us to be able to get out of driveways and onto Okeechobee Blvd.,” she said, explaining that the county does the best it can to control development under the statutory controls it has to work with. “We do not rubber-stamp projects. Developers say they would rather stick hot pokers in their eyes than deal with us.”

The county is now working on GL Homes’ application for 3,900 homes and 345,000 square feet of commercial use, which has not yet been approved. Baker said that county staff is working with GL Homes, rather than turning it down and having them go to the state for ag enclave approval.

The GL Homes application will go before the Palm Beach County Commission for transmittal in February.

In 2017, the county will undertake improvements on Lyons Road and Sansbury’s Way. A project to replace the bridge over the C-51 Canal is underway, but County Road 880 had to be shut down in order to stabilize the canal bank. “We had to invest a million dollars this year and a million next just to keep the road from falling into the canal,” Webb said.

Another project being undertaken is to redesign the off-ramps from Southern Blvd. to State Road 7 to improve traffic flow under the overpass so that there is only one left turn at a time in order to reduce confusion. A project to widen the bridge on Royal Palm Beach Blvd. at the M Canal in The Acreage is also underway.

Webb also reported that the Florida Department of Transportation is pushing hard to complete the State Road 7 extension to Northlake Blvd., although it is still being challenged by the City of West Palm Beach.

The county is also following up on a request by the Town of Loxahatchee Groves for traffic calming on Folsom Road, but the county process requires soliciting neighbors to see what they support.

The county is also trying to sort through several large development applications in the region, many of which have been submitted without consideration of traffic impacts from other developments going through the same process.

He cited the GL Homes plan, along with Avenir in Palm Beach Gardens, as two projects that have to go through two different agencies for land use changes. “The big question is where is all the traffic going to go,” Webb said.

The county is also trying to get a new north-south road in and out of The Acreage, tentatively by an easement on the east side of the Mecca property. Webb noted that a plan has been scrapped to connect the original Seminole Pratt easement between Mecca and Corbett to the Beeline Highway.

Webb stressed that road planning has been complicated by the demise of concurrency at the hands of the state, which has mandated a new policy of “proportional share,” where the developer pays only for its portion of impact, which he said will throw improvements behind until ensuing developers pay their share.

“Palm Beach County has for decades had a reputation for tying infrastructure to growth,” Webb said. “We lived and died with concurrency. We built a lot of roads. A few years ago, the state, in its wisdom, dictated that we can’t do that anymore.”

ABOVE: Commissioner Melissa McKinlay and county officials at the meeting.