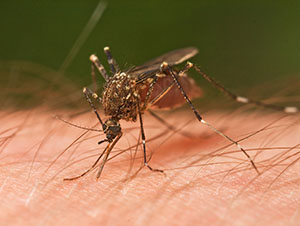 Residents plagued by an unusual number of mosquitoes for this time of year should see a decrease after the county’s recent mosquito control operations.

“Which is more important is debatable, but even if we had the warm weather, we wouldn’t be able to have these mosquitoes without the wet weather,” said Gary Goode, environmental programs supervisor with Palm Beach County.

The ongoing drizzling rain over the last few weeks, he explained, have contributed to the wet weather and ideal conditions for mosquitoes. Goode said it’s deceiving how small amounts of rain add up.

“Most people, when they’re thinking about Florida, are thinking about thunderstorms as our big rainmaker,” he said. “That is true for isolated areas. The thunderstorms are limited in size, so they don’t end up soaking a whole lot of ground. On the other hand, when we get these drizzly rains that just go on for days on end, it’s widespread, covers the whole county, and even though it doesn’t seem like much, because it’s such a large area, it dumps a lot of water on the ground. Eventually that ground, which is like a sponge, fills up with water and it comes to the surface. That’s when we have the mosquitoes.”

Goode said some varieties of mosquito eggs will lay dormant on the ground until the rains occur, then they hatch in the millions. “That’s a very successful strategy that mosquitoes employ,” he said. “It allows them to survive unfavorable periods of time when there’s no water, and they definitely need water to go through their life cycle.”

Mosquitoes have an uncanny ability to know where it will be wet when determining where to lay their eggs, he said. Some mosquito species lay about 200 eggs after each meal.

“These eggs end up carpeting the ground all over the place, as opposed to some of the other species, which lay their eggs on the water,” Goode said.

Laying eggs more than once is how mosquitoes are able to transmit most diseases, such as various forms of encephalitis, malaria and West Nile virus.

“They bite once, taking a blood meal, and, theoretically, taking in whatever disease that they’re capable of transmitting,” Goode said. “They lay their eggs, turn around and they’re looking for another meal. They don’t live forever, so their chances diminish as time goes on. The fact that we have transmission very well documented for different diseases shows that they are at least able to bite twice on a clearly routine occasion.”

Dengue fever is an exception in that the virus can transmit not only through blood meals, but also from the female mosquito directly to the eggs.

“We’ve had a few cases, mostly imported,” Goode said. “That’s probably why dengue is so prevalent in some… Third World countries. The disease is just transmitted through the reproductive process. Fortunately, that’s the exception. Most of the time, there have to be two distinct biting events for disease transmission to occur.”

Goode said his division is looking for resident feedback on the effectiveness of the recent aerial spraying so that they can go back and apply a variety of more localized applications for specific areas. He pointed out that the aerial spraying is effective only on the flying adults, and not on the larvae or the eggs.

“After we do a spray operation, we have field staff members go out and check various places to verify that we actually did some good,” he said. “We want to hear from the public. We rely on the public to let us know if they have mosquitoes, and also to let us know if we just didn’t do the job.”

“We’re not getting the phone calls; our field staff is not finding a whole lot of mosquitoes flying around,” Goode said. “We’re still seeing a lot of water on the ground, and they’re scrambling now to treat them in the water before they hatch.”

The program is focused on areas where there is human population.

“There are hundreds of thousands of acres of flooded woodlands to the west of the urban area out in some of the wildlife refuges,” Goode said. “We’re right on the edge of the Everglades. All of those areas produce enormous amounts of mosquitoes.”

To further help control mosquitoes, residents are asked to drain or minimize standing water on their properties.

Anyone who is going to be outdoors after dark should be sure to use an insect repellent containing DEET, and wear long pants and a long-sleeved shirt.