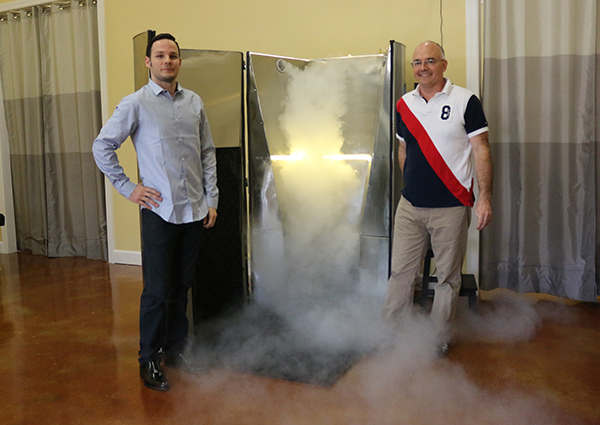 A permanent cold front, controlled by a power switch, has hit Wellington with CryoRegenex. It comes by way of an ultra-low temperature cloud of dry nitrogen, and only takes a few minutes to work its magic.

“The machine itself has been in development since 2013,” Stroze said. “The machines that are currently on the market are either available from the Ukraine or from Poland. This is actually home-grown. It’s done right here in Florida. It’s done to an aerospace grade. It’s safer, more consistent, and hitting the therapeutic temperatures that you normally don’t see with the machines that are currently available.”

When using CryoRegenex, the patient stands in a pod of sorts, where supercooled air, a cloud of gaseous nitrogen, or cryovapor, decreases body temperature in a short period of time. This activates a neuro-response that forces the body’s blood supply to travel inward toward the core and the heart.

“You’re actually increasing the oxygenation within the bloodstream. When you step out of the machine, it’s significantly warmer,” Stroze said. “When you’re doing that, you’re pressing all of the blood that was sitting within the core out to the periphery, back out through the muscles and tendons to the arms and the legs.”

The majority of the research on cryotherapy has been on athletes. High-profile athletes such as LeBron James and Cristiano Ronaldo use it for recovery, Stroze explained.

The ideal temperatures, Stroze explained, range from -230F to -160F.

“It’s not so much about the temperature,” he said, “it’s how the body is experiencing that temperature.”

The time of therapy is somewhere between two and four minutes, in swimwear. For athletes, being faster than an ice bath is an advantage, and cryotherapy works differently, not freezing the tissue but moving the blood.

Cryotherapy can be used for recovery from intense physical activity, arthritis and many other ailments.

Stroze first learned about cryotherapy a few years ago and was intrigued. The reported benefits worked well with his specialty as a chiropractor, and what he was seeing with his patients. “It’s completely new. It’s something that is still being explored from a clinical research point of view,” Stroze said. “It’s something a little bit different than using an ice pack.”

His father, Mark Stroze, co-developer of the system, explained the many differences between the CryoRegenex machine and its competitors.

“We’ve taken away some of the risk factors. We add oxygen to the process, so you don’t have this oxygen-deficient atmosphere,” he said. “And the other factor that we have is, with the distribution, you don’t get the cold spots and the hot spots. We have anti-splatter.”

Two years ago, Stroze and his father began the journey of creating a superior machine.

They created the design, which is provisionally patented and is the only one in the United States.

“The way it has been designed, is a different level of expertise and attention to detail than what was available before,” Stroze said.

They are sending machines to clinics in Washington, D.C., and Maine.

“We’re looking at it as more of a therapeutic modality vs. a toy; an experience. We’re working at a little bit different of a level than what’s currently available,” he said. “That can be seen within the machine, with the five anatomically positioned vents, the way the cryovapor is being generated — it’s being fully oxygenated, which helps the hot and cold spots. It makes it more consistent. You’re working at whatever temperature the practitioner has decided for the client.”

Stroze picked Wellington for his base of operations due to its location and population, where potential clients could benefit greatly from cryotherapy.

“It’s a great central location, especially with all of the design and production team being in Florida,” he said. “For the equestrians, it makes a lot of sense for them. They’re more physically active than a lot of people give them credit for. It’s also an Olympic year, so people are doing a lot more serious training than they would normally be doing, so it makes a lot of sense for them to be able to have something to help them get to that next level a little more easily.”

Triathletes and athletes around Wellington will find the convenience of the location ideal, rather than having to travel 45 minutes to get to something similar. For those who are not top athletes, even just exercising for 20 minutes a few times a week at a gym, Stroze emphasized, they still have inflammation, which means that cryotherapy is beneficial for them.