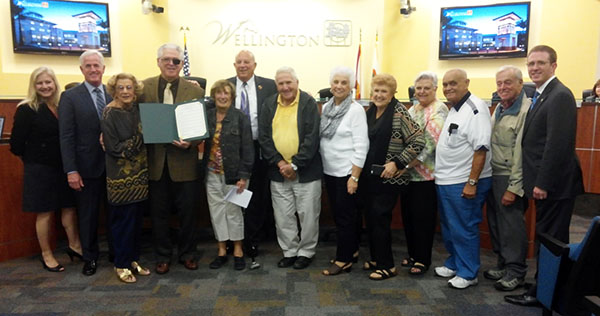 The Wellington Village Council honored retiring Wellington Seniors Club President Howard Trager on Tuesday for his more than 23 years of community service as an advocate for Wellington’s senior citizens.

Trager joined the nonprofit Wellington Seniors Club in 1992, where he became a valued and dedicated member, according to the village’s proclamation honoring him.

Shortly after joining, Trager became a member of the club’s board of directors, and served as vice president before being named president from 2006 to 2010, and then again from 2014 to 2015, when he retired.

“Since 1999, Howard has sat at the helm as the editor and publisher of the Golden Banner newsletter, which serves to inform the Wellington Seniors Club members of upcoming social and community events, as well as important health information,” the proclamation noted.

As a participant in variety shows, Trager displayed his vocal, comedic and theatrical talents by appearing in numerous sketches.

Trager also served as Wellington’s official senior services coordinator from 2010 to 2012, when he identified and brought to light critical issues such as the need for senior transportation in Wellington.

“I’ve been here since December of 1988, and a lot has transpired since then,” Trager said. “I am deeply honored by your words and kindness, thoughts and deeds, but there are many, many people to thank.”

He thanked his partner, Estelle Rubin, the Wellington Seniors Club board of directors and Wellington officials who have worked with him over the years.

“It has been a labor of love, and I thank you all so very much for this great honor,” he said. “I didn’t know that I’d be speaking tonight, but I just wanted to express my thanks for what you have done for me this evening. It is just a great show of what this village is all about, and I’m so happy to be a part of it.”

Councilwoman Anne Gerwig said that what Trager has done for the village is amazing.

“The time you spent working with us and for us is incredible,” Gerwig said. “You’re just everything we want in a community member — someone who gets involved, takes on hard issues, deals with problems and tells us when we’re wrong. I appreciate that.”

She presented Rubin with a bouquet of roses to show her appreciation for sacrificing time with Trager so he could carry out his commitments.

“I know you didn’t do this by yourself,” Gerwig said. “I’m going to come down and give this to your partner because she has been alongside through a lot of this time.”

Vice Mayor John Greene noted that he has attended several of the senior lunches where he has seen Trager’s influence.

“I’ve seen the impact that you have and the work that has gone into this, not just from the senior community, from all the volunteers and all the people who have been a part of this, including some of our staff members… and this council,” Greene said. “I think we’ve demonstrated tremendous support for what you’ve done… I hope that legacy will be carried on by your replacement.”

Jerry Springer has been named to replace Trager as Wellington Seniors Club president and Golden Banner editor. Greene added that he reads the Golden Banner every month, and especially enjoys the jokes.

“You can count on me to continue my support for the lunches and the senior programs that really make a difference in this community,” Greene said. “We’ve heard time and time again that it’s important for seniors to be able to age in place, and we’ll continue to make sure that we are providing the resources. You guys made Wellington a big part of what it is today.”

“We are aging in place,” Trager quipped. “As we speak, we are aging.”

Councilman John McGovern said that Trager is setting an example for all of them to follow.

Mayor Bob Margolis recalled Trager’s role as president of the village’s senior task force when it was organized more than a decade ago.

“It seems like I have known you almost all of my time in Wellington, and I probably have,” Margolis said. “I guess the road map that you all set for us in determining where our seniors want to stay, and what is needed for them, you’ve never wavered. You’ve always been the leader of the senior community.”

Margolis pointed out that Trager not only gave up his time for the village’s blue-ribbon committee on seniors but also the Senior Advisory Board, as well as the Wellington Seniors Club.

“You and I have talked a long time about what we want,” Margolis said. “We joked that it always seems to come up every couple of years and it never gets built, but the senior center, the new Wellington Community Center, is getting built, and you and I are going to see it in a couple of months, so thank you for your unwavering need to get that built.”

He thanked Trager for his passion to the cause. “You absolutely tell us where we need to be, and hopefully we’ve listened to you,” Margolis said. “Seniors and non-seniors should be thanking you for the things that you have given to the Village of Wellington.”