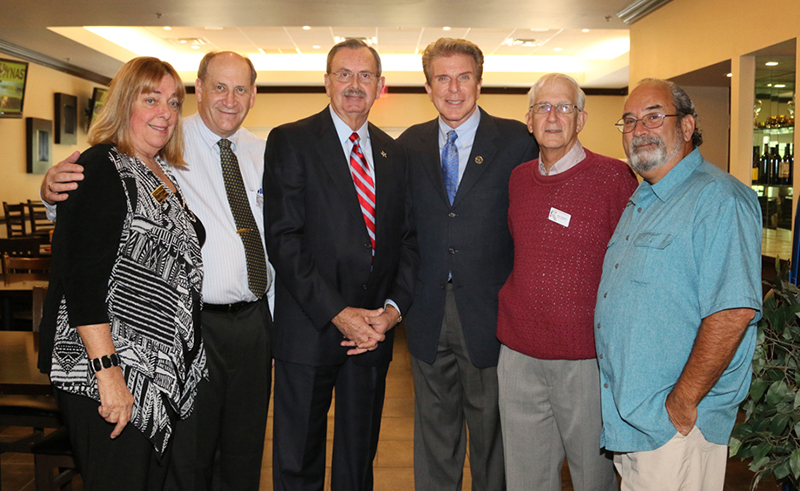 The well-attended luncheon was the first event of what is expected to be a busy year.

“We have some great events coming up planned for the next year, some luncheons and some special things and people as well,” said Tim “The Byrdman” Byrd, who served as master of ceremonies. “It will be bigger and better. And hats off to you for making your first year, your inaugural year, so successful.”

“He has been keeping Palm Beach County safe for many years. That job is full of sacrifices, but he has the experience to do it at the highest level imaginable,” Byrd said.

Bradshaw has more than 40 years of experience in law enforcement and is the leader of the largest law enforcement agency in Palm Beach County. He has specialization in domestic security, field operations and community-based policing.

“He’s an integral part of what makes things happen at our agency,” Bradshaw said. “Over the past 11 years that I’ve been fortunate enough to be your sheriff, he has helped tremendously to accomplish what we need to.”

“It took us about eight months to get rid of the gang that was there. They shot 111 people, killed 12, but they had a grip, not only in the community, but the downtown area,” Bradshaw said. “As soon as we got rid of them, business started coming back downtown… The businesses are doing better than they ever have before. We made it safe.”

Gang identification has changed, but they are in business doing everything from narcotics and stealing cars to robbing banks, he explained, focusing on identity theft with housing fraud and tax refund fraud.

“Our main emphasis on violent crime is to fight the gangs. Nobody has done more against gangs in this state than your sheriff’s office here. In fact, the model on how to fight gangs was modeled after what we do,” Bradshaw said. “We take them all at once. Whether it is 25, 50 or 100 of them in the gang, we make the cases, and we take them out, because it’s like cancer. You can’t just take a little bit of it. You’ve got to take them all out at once.”

Keeping kids from joining gangs is also a major PBSO focus. The PBSO has put money into the Boys & Girls Clubs of Palm Beach County and after-school programs. The gangs, he explained, start recruiting children as young as 8 years old.

Regional focus and advisory groups are a new goal of the PBSO.

“We put our money where our mouth is,” Bradshaw said. “We partnered up with the Urban League, and we gave them $200,000 from our forfeitures fund to try to start a jobs program to keep these kids off the street.”

The PBSO is the lead agency for Homeland Security from Martin County to Key West, joined by 182 agencies, running the regional fusion center, Bradshaw said. Deputies are also assigned to the Joint Terrorist Task Force with the Federal Bureau of Investigation.

“We’re the only county in the United States that has coastal radar,” Bradshaw said. “We stopped a boat three weeks ago that had three Chinese nationals on it… We have to be very careful about who is trying to be smuggled into this country. It’s not all about the drugs.”

As the eighth-largest sheriff’s office in the nation, he explained, they have a big responsibility, and helicopters and boats are expensive. Each month, 1,000 calls are made from other jurisdictions to the PBSO asking for help.

“What’s the price that you put on your safety? What is it? There’s no price on it. It’s priceless,” Bradshaw said.

Body cameras are a hot topic within law enforcement circles, which Bradshaw was careful to address.

“I am not against body cameras,” he said. “They have a useful purpose. What I want you to leave here with is the understanding that body cameras are not the answer — they’re not the silver bullet — to all of these issues that are going on across the country where you see inappropriate actions on the part of law enforcement, in some specific instances. It’s not the answer. That’s not going to stop anything. They’re taking pictures of it now happening. So it didn’t stop it. The body camera is another tool.”

Any time that happens, he explained, there is an independent investigation.

Evaluating the situation differently, getting backup and the helicopter or dogs, Bradshaw said, is how officer-created jeopardy situations can be decreased. “It’s about policies, training and supervision,” he repeated.

If the Palm Beach County Commission were to offer Bradshaw the $19 million, he would use it to add 100 deputies.

Calls for service, he explained, keep increasing. Bradshaw used to have 2.6 deputies for every 1,000 calls for service. Now, he has 1.3. The national average, he offered for comparison, is 2. “You don’t want to get below 2, and we are right now,” he said.

If he was offered the extra funding, Bradshaw said, he’d put more people on the roads, more people in the gang task forces, more community policing and more toward keeping kids out of gangs, to help people stay safe.

The luncheon was sponsored by Bob Salerno, owner of the new Liberty Tax Service location in Royal Palm Beach.

Liberty Tax Service is holding a grand opening party Friday, Jan. 15 starting at 3 p.m. The business is located at 1161 Royal Palm Beach Blvd. There will be raffles and prizes all day long, as well as pizza and refreshments, Salerno said.

Learn more about the Western Business Alliance at www.thewesternbusinessalliance.com.