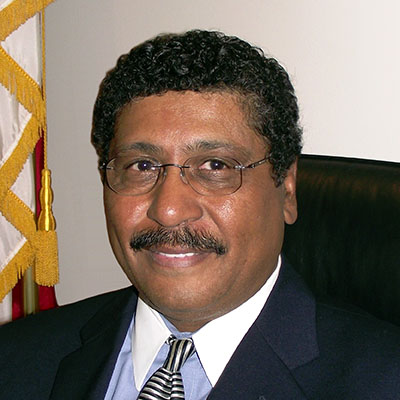 After serving on the Royal Palm Beach Village Council for 13 years, Fred Pinto is seeking a promotion to mayor. However, in order to win the post, he will have to defeat former Councilwoman Martha Webster in the Tuesday, March 15 election.

Pinto sat down recently with the Town-Crier to explain why he should replace retiring Mayor Matty Mattioli.

Born and raised in Harlem, N.Y., Pinto graduated from Fordham University with a bachelor’s degree in business administration, as well as the United States Army Command and General Staff College. He is a retired lieutenant colonel.

Before moving to Royal Palm Beach 17 years ago, Pinto spent two decades working on Wall Street, where he helped big investment firms move into modern technology. He was elected to the Royal Palm Beach Village Council in 2003.

Pinto believes that his business background has provided him insight that helps manage the village’s business strategies.

“I looked at the village and observed some things that I thought would be down the path that decisions would have to be made for the village to continue to grow and be prosperous,” he said.

Pinto cites the decision to get out of the water business among his top accomplishments on the council. That move, he noted, has since netted the village more than $103 million, providing a cushion that protected Royal Palm Beach during tough economic times. He is also proud of creating Royal Palm Beach Commons Park on the site of a defunct golf course.

For years before the economic downturn, Royal Palm Beach lowered its tax rate every year. In recent years, it has been held unchanged, but Pinto believes it is time to begin lowering it once more. “I believe we’re the second-lowest millage rate in all the county’s 38 municipalities,” he noted.

Becoming a part of the PBSO was an emotional change for the village, although it turned out to be very beneficial, he said. “Once again, from a business standpoint, my argument was, ‘How can you argue with these numbers?’” he said.

At the time, the village’s police force was hiring and training bright young people who were leaving and joining the PBSO. “Quite frankly, if I was one of these people, I would do the exact same thing,” he said. “Where is my career opportunity in a Mayberry police force as opposed to no ceiling with the PBSO?”

He also pointed out that it was increasing the safety for residents by using the PBSO’s greater resources.

“That resonated with members on our council who were really all over the place on this thing emotionally,” Pinto said. “That decision made us all look like geniuses. We’re not geniuses; we just made a tough decision at the right time.”

His goals over the next two years include getting back to reducing the millage rate. “We’re going to be making decisions in the next several months that will put us on the path to doing that,” he said.

Part of that was the recent decision to pay off the Commons Park bonds with revenue gained from selling the old wastewater treatment plant site. “To me, the decision is not difficult. Why? Because interest rates are so low,” Pinto said. “We’re paying more out in terms of the rate of interest than we’re getting in the rate of return.”

The result will be that the council can reduce the tax rate by not having to pay about $1.8 million in interest annually, he said.

Other goals include attracting an assisted-living facility to a site set aside near Commons Park. “That’s not going to happen overnight,” he said. “You cannot predict variables that will happen in the marketplace.”

Not only does Pinto want to understand the market and where it will be in the future in regard to a senior living facility, he also wants to assure that it will specifically benefit village residents.

“How do we do that? There are laws around those issues,” he said. “We still have to figure that out, but I am more comfortable about dealing with it now than I was two or three years ago.”

Pinto believes that he is the best person to serve as mayor because he has the hands-on experience.

“One of my approaches that has always been successful is to separate politics from governance,” he said. “I find that a lot of people in elected office don’t really know what the role of government is. They go off track and get involved in things that are beyond the scope of government.”

Pinto stressed that he understands the background of the village and its vision for the future.

“I have a good handle on the pulse of this village,” he said, explaining that he often has to coax people to tell him how they feel about the village.

Pinto said that when property values were going down and the council , along with Village Manager Ray Liggins, was challenged to keep the government afloat, he came up with the $5 million rate stabilization fund taken out of the $70 million from the utility sale to help them through.

“That gave Ray the buffer to continue to operate without us going [into debt],” he said.

Regarding the current campaign, Pinto feels that the top issues have been motivated by politics, rather than problems with the way the village is being run.

“We have had an extraordinary track record in this village of good governance, sound governance, responsiveness to the needs of the citizens in this village, and I applaud my fellow council members who are also up for re-election,” Pinto said. “I would love to see them continue in that role as we move forward with the village.”

He bristles at suggestions that Royal Palm Beach is being improperly run.

He credits Liggins for doing an excellent job as village manager.

“As any of us should be, he’s growing and he’s continuing to grow… but he’s on top of the things he needs to be on top of,” Pinto said. “He handles working with all the different personalities on the council in a very professional way.”

Pinto feels that council meetings provide ample opportunity for public input. As mayor, he hopes to make sure meetings keep a positive tone.

“I think we really work at that to make sure that we engage the public,” he said. “If you’ve got something that you want to say, please come up and say it. I think what we want to do going forward is that we create an environment of friendliness, collegiateness, that we don’t want to have people feel that there is a negative tone in the air.”

If elected, he plans to meet with the manager, clerk and other staff to see if there is a way to make the meeting process better.

To ease traffic problems, Pinto said that the council needs to take a hard look at traffic impacts.

“Traffic has been a problem since before I was here,” he said. “Every project that we do, we have to look hard at what the impact on traffic is.”

He said that there are practical solutions to traffic issues, such as an idea he had about a deceleration lane going west on Southern Blvd. at Lamstein Lane that finally came to pass.

To reduce traffic issues at major events at Commons Park, he said they had talked about charging to park there, but the idea did not go over well.

“The whole point of Commons Park and the events we have there, is it’s free,” he said. “What we’re saying to the citizens is this is a service that we’re providing you for the taxes you pay.”

“It’s a nice problem to have, and we have to continue looking at this as we move forward,” Pinto said, adding that the village has taken steps to improve traffic there since its first major event, such as having traffic going in one direction after the event, and having a shuttle service to and from the park.

The village has more park space per capita than any other municipality in the county. Asked whether maintenance costs will become a problem, he said they will not because the village is taking steps to manage costs, such as outsourcing maintenance. He added that the manager is looking at sponsorships for events to further reduce costs.

Regarding future development to the west, Pinto said that the village has been working closely with Palm Beach County to minimize their local impact on the village, which has been complicated by new state rules limiting the amount of money that developers must pay. “The question becomes, ‘Where is the rest of the money going to come from?’” he said.

He added that he would like to see traffic from new developments routed north rather than through Royal Palm Beach. “I do not want to see Okeechobee Blvd. widened,” he said.

Asked whether the correct decision was made by the council in approving a RaceTrac gas station at Southern and Royal Palm Beach boulevards, Pinto said that the contention over it was politically motivated, noting that the applicant went through the approval process without variance requests, and met all the criteria.

“There was a back-and-forth process that took about a year,” he said. “They finally came up with a plan that we felt was appropriate and would add to, not take away from, the village.”

Pinto’s vision for the village’s future is to continue on the same path it has in the past.

“I want to see us stay on the right course,” he said. “We’ve had extraordinary progress for our citizens. I want to stay on that path and be the top place for people to come and raise their families.”

Pinto feels that village residents should vote for him because he has earned their confidence.

“Every year, I have to earn their trust, and I have demonstrated that their trust is well placed,” Pinto said.