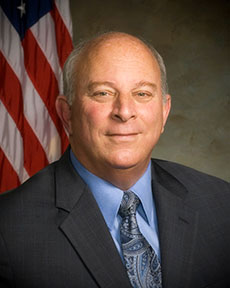 Incumbent Wellington Mayor Bob Margolis is being challenged in his re-election bid by Councilwoman Anne Gerwig.

Previously a council member, Margolis was elected to a four-year term as mayor in 2012. He is now seeking a second term. He recently sat down with the Town-Crier to discuss his first term in office and his plans for the next four years.

Margolis noted that this campaign, which will culminate in the March 15 election, will be his last.

“Not only due to term limits, but this is my last campaign,” he said. “I’ve given over half my life to the Village of Wellington. I will still continue, but maybe from the sidelines.”

Before retiring, Margolis had a career with Proctor & Gamble for 25 years. He moved to Wellington in 1983 and quickly became involved with parks and recreation, first in coaching, then later on the Parks & Recreation Advisory Board.

Margolis was appointed to a vacant council seat in 2003 and elected in 2004. He won a four-year term in 2006, but left the council in 2009 after a failed bid for Palm Beach County Supervisor of Elections. He returned to local politics with his mayoral bid in 2012.

“I ran for mayor because there were more things that I wanted to get done,” he said, explaining that he disagreed with then-Mayor Darell Bowen on several issues. “After the 2012 election we focused in a different direction, and the last four years… quite frankly has been a humbling and gratifying experience.”

Margolis’ election, along with that of Vice Mayor John Greene and Councilman Matt Willhite (who was re-elected), was the most tumultuous in the village’s history. The initial ballot count was found to be faulty due to a tabulation error that initially seated other candidates instead of Greene and Willhite. Although the audit confirmed Margolis as mayor, he was embroiled in lawsuits, adding fire to a contentious atmosphere that he said was aggravated by his opponent in the current election.

Margolis characterizes himself as being a listener and often casts the deciding vote on a divided council.

“There have been some bumps in the road, some self-imposed,” he said, explaining that he has often acted as conciliator rather than opinion leader.

“Everyone has one vote,” he said, explaining that he sees the title “mayor” as a ceremonial post. “The agenda is set by staff. I don’t set things on the agenda.”

While Gerwig has charged Margolis with being a poor leader, Margolis takes aim at conflicts of interest that have stopped Gerwig from voting on major issues due to the engineering firm owned by her and her husband.

Gerwig was passed over for selection as vice mayor as would be the usual rotation, and some say that heightened council tensions. Margolis agrees that it probably added fuel to the fire, but he believes it was a legitimate decision.

He noted that Gerwig complains about long meetings, but pointed out that almost 80 percent of those that ran past 11 p.m. involved projects or lawsuits involving horse show promoter Mark Bellissimo, a vocal opponent of the current council majority and a supporter of Gerwig.

Asked whether it was fair to say that there were two voting blocks on the council, Margolis said that he never ran on a slate with Greene and Willhite, and has differed with them on many issues.

Regarding campaign financing, Margolis said he has about $10,000 less than Gerwig. Although he has backing from the Jacobs family, he said they are not his primary source of money.

“I don’t have a PAC behind me,” he said. “I believe there is some special-interest PAC money behind her. People like Mark are raising funds for her.”

Asked how having the election at the same time as Florida’s presidential primary would affect the village vote, likely bringing a higher, more partisan turnout, Margolis dismissed the potential effect.

“People know who I am, a Democrat,” he said. “My opponent is a Tea Party Republican.”

Margolis lists his top accomplishments as being a longtime village volunteer, mostly as a coach early on. As for his mayoralty, he claims hiring a new auditor for the village was an important step.

Margolis also said that he is proud of backing Village Manager Paul Schofield when it appeared that Schofield was falling into disfavor.

“[He] came in the first day I was sitting there and offered to resign,” Margolis said. “I told him, ‘No, I want you to suffer as I suffer.’”

Asked to rate the village manager, he said Schofield is doing fine in the face of five different personalities on the council.

“I am the one who pushed Paul to go for the job in first place,” he said. “Do we disagree? Every single day. I would give Paul a 10, but I think everybody has to aspire to do better.”

He points to high levels of service, A-rated schools, high property values and low crime during his tenure as mayor. “We built a new community center and a new tennis center,” Margolis said.

Over the next four years, the council needs to concentrate on fixing aging infrastructure and refining a business-friendly environment, Margolis said. He added that he has been working on improving relations with the Wellington Chamber of Commerce, which backed Bowen’s re-election in 2012 and has been critical of some council decisions.

The top three issues in the election for him are fiscal responsibility, quality of life and levels of service. He wants to improve open space and see that there is no commercial development in the Equestrian Preserve Area.

About whether the village should buy the Binks Forest Golf Club, Margolis said that data showing there would need to be 30,000 to 40,000 rounds annually to break even tell him it is not feasible at this time.

Asked if he agreed with the decision not to move forward with developing the K-Park property on State Road 7, he said that pressure to have it as green space diminished with the development of the Wellington Environmental Preserve, but that he still favors holding some of it for a future park.

He noted that he was against giving the K-Park property to Palm Beach State College for development of a fifth campus, and opposed its sale for commercial development. “I still think we need park space,” Margolis said. “We can use half or two-thirds for parks,” noting that he met recently with someone proposing a science museum for the land.

The village’s financial director recently warned about possible revenue shortfalls in the future, and Margolis said that one of his goals is to look for areas of opportunity to become leaner.

“I’ve always been of the belief that people won’t mind spending additional money, but they have to see the benefits,” he said.

Asked what the village should do about development plans west of Wellington, Margolis responded that other municipalities asked the village to join in requesting Palm Beach County to limit density in the proposed developments, which the council rejected in a 3-2 vote. He was one of the dissenters.

“That was disappointing to me,” he said. “Our neighbors came to us and said, ‘Please help us.’ It’s going to affect everybody. We made a mistake, and we should be joining our neighbors. [Gerwig] would rather side with the developers and not with our neighbors.”

Asked to rate the job that the Palm Beach County Sheriff’s Office is doing, Margolis said that the village has a phenomenal relationship with PBSO Capt. Jay Hart and his staff because they are community-oriented and involved, and the crime and solvability rates are good.

Margolis said that the only issue he would raise is tighter enforcement on the number of commercial trucks cutting through Wellington.

Asked about the council’s relationship with Bellissimo and Wellington Equestrian Partners, Margolis said that it has improved, explaining that he only decides issues brought in front of him.

“I have not had any issues brought in front of me with Mark for at least two years,” he said. “They had the best season last year, and he is the first person to comment on it.”

Margolis noted that the issues with the horse shows are the same as those the council dealt with before Bellissimo took over the Winter Equestrian Festival.

“Mark has made that show more successful, and Mark is of the philosophy in that there should be flexibility within our codes to be able to have him be as successful as he wants,” Margolis said.

Margolis said he believes in limiting commercial development in the Equestrian Preserve Area, and that government should act as a resource and not get in the way, pointing out that Projects Manager Mike O’Dell has done much in the past couple of years to increase partnerships with equestrian venues.

He lists his top strength as his passion for the village and to make it better. “I recognize many people work to make this village what it is,” he said.

His weakness? “People tell me I’m too nice, and that there are situations [when] I need to be more forceful,” Margolis said. “I think ‘too nice’ is a compliment.”

Regarding his opponent’s strengths and weaknesses, he noted that Gerwig also is passionate about the community.

“She has been here for 25 years, and she is very passionate about that. For that, I thank her,” he said. “It’s not easy being on the council.”

Her weakness, he believes, is a failure to work with other council members.

He also feels that Gerwig having to recuse herself due to conflicts of interest is a big problem. “How can you lead if you can’t vote?” Margolis asked.

He said that voters should re-elect him because he has made life better for residents by maintaining low debt, low crime and making improvements to nearly every public building in the village.

“I’m here to help people and make it a better place to live,” Margolis said.