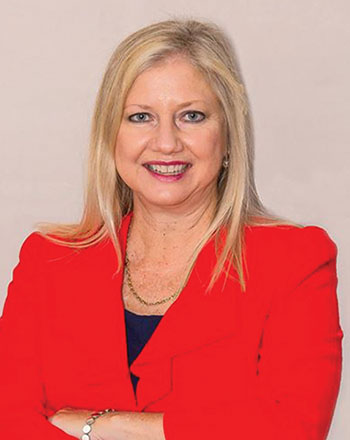 With six years of experience on the Wellington Village Council, Councilwoman Anne Gerwig has set her sights on a promotion to mayor.

Gerwig faces incumbent Mayor Bob Margolis in an election that will take place Tuesday, March 15. She sat down recently with the Town-Crier to discuss her campaign.

Gerwig noted that she will be giving up her seat on the council despite having two years left in her term because she feels that Wellington needs better leadership.

“I didn’t want to sit there for two more years and not see good leadership in this village,” she said. “I’ve enjoyed my time on the council. The staff has changed a little bit, but generally stayed pretty constant, and I feel like we’re in very good shape as a village.”

However, Gerwig feels that a fresh take on the mayorship is needed, with a different approach.

“I treat everyone the same,” she said. “I don’t have a group of people that I serve and that I don’t serve. I work with all of my constituents. I am very, very responsive to residents. I listen to all sides, and I value everyone’s opinion at the table. Even those I don’t agree with, I treat with respect… I think that we lost that level of civility and respect in government.”

There are many different approaches to government, and Gerwig said that her approach differs from the current council majority.

Gerwig feels that she is uniquely suited for the role of mayor, and it starts with her professional land surveying background, which helps her in the planning process, she said.

“I think I have a pretty good understanding of construction, having built a house in Wellington and having some projects going on in our business,” she said. “That gives me an understanding of the process. That benefits us on the council to understand both sides. Being on the business side, and a resident, and understanding how it affects everyone making decisions.”

Gerwig is proud of her work on the council over the past six years, especially building the new Wellington Municipal Complex and the soon-to-open Wellington Community Center.

“I think we’ve done some great things in the council,” she said. “There are a lot of things that have happened in the past six years.”

Putting late educator Keely Spinelli’s name on the village’s public school grant program, Gerwig said, is one of the things that she is most proud of.

“Her work was fantastic in this community. She had a very big following,” Gerwig said. “What she brought was a level of professionalism to public schools, any place she was involved with. She served on the board at Palms West Hospital, she was active in the community. To be able to reestablish that grant and put her name on it, it’s a huge accomplishment for everyone.”

One of Gerwig’s future goals is to make more progress on cultural arts programming in Wellington.

“I think that’s something we can do,” she said, “at the location we talked about initially.”

The 10-acre site behind Hampton Inn by the mall, she said, is the best location for a cultural arts center.

“I think that as we look at the big issues in Wellington, K-Park being one of them, I think we need to start back at the drawing board and figure out what we need for recreation before we get rid of any large pieces of property,” she said. “We need to look at a comprehensive plan.”

Before selling the K-Park land, she said, determining Wellington’s recreational needs should be done first, pointing out that there is only one baseball field that is high school length at Village Park.

She advocated a responsible approach to government, being respectful of the residents. For example, not removing trees on canal banks unnecessarily — a controversial project that she got involved in and slowed down.

“If there’s not a good reason, why are we doing these things?” she asked. “I think I’m good at addressing residents and working out compromise for their benefit.”

Code enforcement fines, she said, are another top issue. The law allows Wellington to increase fines, she explained, but that doesn’t mean it’s a good idea.

“I don’t think that it is necessary to charge anyone $5,000 a day for code enforcement fines,” she said, compared to the current $1,000 fine.

Gerwig had complimentary things to say about Village Manager Paul Schofield, rating his job as a five on a scale of one to six.

“Paul has been an effective leader. I’m glad we were able to work that out,” she said, noting Schofield’s recent contract extension. “I don’t think firing [former Village Attorney] Jeff Kurtz at a meeting, without a method of replacement, was responsible government. He could have walked out of that meeting, and we wouldn’t have had legal representation for the rest of that meeting.”

She asserted that the village has lost some of its best senior staff due to poor council leadership.

“The environment that they dealt with through all of this controversy has been tough on staff,” Gerwig said.

There are many changes that she would like to see in how the village is run.

Having the open staff positions filled, she said, would be ideal. Spending $2.5 million on the new Wellington Tennis Center, she added, wasn’t necessary. Clay courts are a high-end product, but there isn’t an asphalt court for just anyone to play recreationally, she explained.

Buying the Binks Forest Golf Club has been an item of discussion, but she feels that it is too expensive. The price, she said, would be $3 million for the property.

Regarding the K-Park property, Gerwig believes that the village should be in control of what happens.

“The council needs, whatever happens March 15, to come together and have a vision for K-Park. I think it hinges on what our recreation needs are first, then our entertainment needs,” she said. “Residents were very vocal about wanting an entertainment district.”

Before moving forward, Gerwig said, there needs to be a comprehensive plan.

“We should not be asking developers what they want to do on our property and picking one. We should tell them what we want,” she explained.

A place for lacrosse and baseball is something Wellington is lacking, Gerwig explained, noting that lacrosse is a great way for kids to get college scholarships.

Adding more recreational activities means that more money is necessary to maintain them. That is fine with Gerwig, “as long as we manage our resources effectively, and leverage our economy,” she said, so revenue comes in without having to raise taxes.

Major developments to the west, such as Minto West and GL Homes, are county decisions, she explained. However, those projects do not have Gerwig worried. “I think it benefits us,” she said.

The developments won’t have golf courses, which might help Binks Forest, or hospitals. Businesses in Wellington might receive a boost from the increased population, she said.

Gerwig is pleased with the service Wellington gets from the Palm Beach County Sheriff’s Office. While the village pays more to get a higher level of service, Wellington gets a great value.

“I think the sheriff’s office does a really good job. We have the benefit of local leaders,” she said. “We have a captain we can call if we have a problem.”

She would, however, prefer more PBSO deputies patrolling the area.

“As far as how critical we are of the operations there, I think they aren’t due any unusual level of scrutiny that we don’t give anyone else,” Gerwig said. “That has always been my statement — a level playing field for everyone.”

Gerwig criticized the length of council meetings, which often go beyond the sanctioned time of 11 p.m. “It’s not good government to make decisions at 12:30 a.m.,” she said.

Gerwig opposes the idea of Wellington having its own equestrian venue.

“Unless the residents decide that we want a public riding facility for a public use, equestrian venues are expensive,” she said. “If we can’t afford the insurance for the high dive that we took out at the pool, how are we going to afford the insurance for an equestrian arena that Wellington is covering? I think it is something that is managed very, very well by the private industry.”

Being on the presidential primary ballot means that this year’s election will be more expensive and take more effort to reach the voters.

“I think that municipal elections are best standing alone because our issues are not those issues,” she said. “However, I haven’t changed anything about my campaign because of it. I don’t think it changes the local issues.”

Gerwig considers her top strengths to be her character and how much she values people. “I can’t hold a grudge. I’ve really never been able to,” she said. “Once something is over, it’s over for me. I don’t carry any kind of ill will against anyone.”

Gerwig said that her opponent’s strength is that he has a lot of funding, but said his weakness is a lack of contact with and response to the community.

Why should voters choose Gerwig?

“They should vote for me because of my commitment to this community,” she said. “All of this community, and not just pockets. That is why I am best for Wellington.”