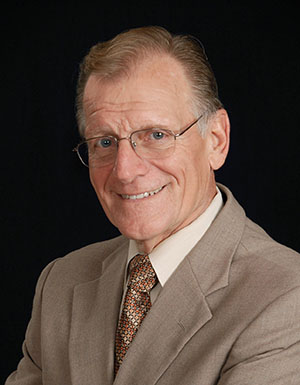 When Royal Palm Beach Councilman Jeff Hmara first ran for office, he thought that his 42 years of federal experience, including 25 years in project management, would be beneficial to the community.

“As it turns out, I think those experiences have really paid off,” said Hmara, who is seeking his third two-year term on the Royal Palm Beach Village Council next month.

Hmara recently sat down with the Town-Crier to discuss his goals for the village. He is being challenged by Lenore White in his bid for re-election to Seat 1.

Hmara is no stranger to overseeing large budgets. He has managed a billion-dollar program for the Federal Aviation Administration, among other projects.

He feels this experience has served him well on the council. It came into play in the recent decision regarding plans for a RaceTrac gas station at the corner of Royal Palm Beach and Southern boulevards.

Village staff worked for more than a year on the project, Hmara explained, praising their efforts.

“At the last meeting we had, I felt pretty much as though I was leading the negotiation toward the additional concessions that we got out of RaceTrac,” he said. “It wasn’t until after we were out of the meeting that I realized that [the reason] I was so comfortable doing that in that very stressful environment is that I’ve done this before with major contractors.”

Hmara, a retired army colonel and adjunct professor at Palm Beach Atlantic University, believes in a structured approach to projects, and advocated for developing a strategic plan for the village, as well as keeping residents informed.

“Another thing I feel strongly about is informing the public as much, as quickly and as completely as we can,” he said. “My military background and experience tend to put me in a position where I greatly value truth, honesty and reliability.”

Maintaining and establishing trust, he explained, can be done through informing people.

Utilizing his skills have helped Hmara as a councilman. Some of his top accomplishments, he explained, focus on such efforts.

Finding a compromised solution for RaceTrac, Hmara said, is one of his top accomplishments.

“It took a lot of hard work and overcame, I think, opposition that wasn’t really well-founded in every case,” Hmara said. “But in the cases where they were, we got additional information, gave it a fair hearing [and] worked hard to make sure what we were doing was the right thing.”

He has spent a great deal of time working with Royal Palm Beach’s Education Advisory Board. Though the board has little formal authority, he has helped make it a platform to advocate for local schools.

Helping to bring the International Baccalaureate program to Royal Palm Beach High School — the only one in the western communities — is something that especially gratifies Hmara.

“Recognizing the timing and pushing real hard, we wound up with an IB program,” he said. “I’m striving for a Junior ROTC program next. I think that one piece will make a huge difference for the student body across the board.”

One of Hmara’s favorite accomplishments, the one that led him to run for a council seat, was coming up with an appropriate use for the village’s old wastewater treatment plant property off Crestwood Blvd.

“Back in 2011, it was almost a commercial industrial complex,” said Hmara, a resident of Madison Green who opposed that idea. “My take: The development of that property so it is compatible with the surrounding area is a better choice than setting that property aside for some future date.”

Hmara acknowledges that the RaceTrac issue has been a focus of this election campaign.

“We started talking about this a long time ago… in public. Then we followed the regular, normal notification process on that,” Hmara said. “I think the campaign is really primarily about the RaceTrac decision, which, I might point out, has already been made.”

Though that issue has been decided, Hmara said, it is still being used to discredit the village and its procedures.

“It’s being leveraged to assert that we don’t operate as transparently as we should,” he said, “which I think is a complete fabrication — [as is] the claim that RaceTrac is going to destroy the character of the community.”

Nevertheless, he is always looking at ways to communicate better.

“Is there more that we can do to share with the public? I’m sure there is. I have some ideas. We actually worked on that last year — it was part of our strategic plan,” he said. “We are more than transparent, and we’re going to keep striving to improve.”

Each month, Hmara puts together an update to inform the public that is published in several places. “It’s about informing the public,” he said.

Part of that involves meetings, which are open to the community.

“We have a format and structure that is adequate for public input. The conduct of that, the implementation of that, can be unnecessarily difficult. I think we’re going to see a change coming up [and] a more inviting atmosphere,” he said, stressing the importance of respectful disagreement and civil behavior.

Hmara is happy with the way Village Manager Ray Liggins is doing his job.

“Ray has the energy and the intensity to pursue at great length the details necessary to really well understand the problems,” Hmara said. “Being able to then step up… and talk about it, he does that well.”

Over the next two years, Hmara has three goals in mind.

“I want to finish the development of the Crestwood property, and that’s not done until it is done. That’s really important,” he said.

Hmara would like to see traditional, charter and private schools in the village all be A-rated. “They’re such a key component to a healthy, vigorous and vibrant community,” he said. “We’ll help however we can.”

He also wants to focus on infrastructure. “The community is going on 60 years old,” Hmara said. “Some of the roads have been around for a long time.”

A hot topic for Royal Palm Beach is traffic problems on village roads and at the parks. To ease those, Hmara suggests making sure that roads are well-maintained, and adequately staffing the Palm Beach County Sheriff’s Office so it can effectively patrol the roads and enforce traffic laws.

Regarding the traffic congestion at Royal Palm Beach Commons Park after events, Hmara was optimistic.

“The first Fourth of July was a great opportunity to make improvements. Since that time, they’ve done things like open up both lanes exiting, and one turn only coming out of there, and lights on flash, and things of that nature improving the flow of traffic,” he said. “There was a world of difference the second time. Even better the third time.”

While some have suggested that Royal Palm Beach focuses too much on parks and recreation, Hmara is proud of the village’s parks, all of which are well-used, he said. However, he would consider outsourcing more of their maintenance.

He said that Royal Palm Beach has been somewhat successful in pushing the much-needed State Road 7 extension to Northlake Blvd., which has been an ongoing battle with the City of West Palm Beach.

“We’re going to hang in there. Last year we went up to Tallahassee and… actually, I think we got some results from all of our efforts,” Hmara said, explaining that lobbying won SR 7 financing for 2017 instead of 2020.

In Hmara’s years on the council, he has learned many things, and wants to continue learning with another term.

“Just like any other new discipline, it takes time to become conversant, to have enough background to judge what is important and what isn’t important,” he said. “It takes years to get to the point where you become really effective. Some of that time is spent outside of the community and getting an understanding of what’s going on that affects us.”

Royal Palm Beach and the surrounding communities are changing rapidly, he said, adding that he’d like to see most things remain the same, and become better.

“I want to see Royal Palm Beach maintain its character,” Hmara said. “We talk about it having a hometown feel. I want to develop that even more. I want it to become owned by the people to the point where they just love the place. I’m not saying they don’t right now, but you can always expand on that.”

Hmara said that he enjoys talking to people and listening to them, considering his desire to converse and learn what people want as his top strength. Not knowing as much as he’d like to know, he said, is his weakness.

Hmara credits his opponent for stepping up and running, but feels that she is not particularly involved in the community.

“I don’t really know her very well,” he said of White. “As far as I know, she’s not involved in the community at all. I believe she’s on a board at Greenway Village. Beyond that, the only time she has ever shown up for a council meeting, or for that matter, any of the other organizations that we have in Royal Palm Beach, was three of them, not all of them, on the subject of RaceTrac.”

Nevertheless, Hmara is planning an energetic campaign to get his message out to the voters.

“I’m taking my opponent seriously,” he said. “I’m doing the best I can to convince the voters that they should vote for me.”