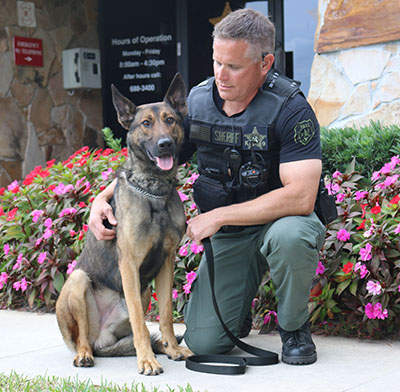 The Wellington substation of the Palm Beach County Sheriff’s Office has a new member, and he looks great in a uniform. His name is Leo, and he’s 18 months old.

Leo is a four-legged German shepherd and Belgian Malinois mix, and he has been paired with Deputy Scott Bates as a handler. Bates has been a full-time PBSO deputy since 2007, and was a reserve deputy prior to that.

A request was put in last year for a K-9 dog, explained Sgt. Roy DeMarco, who has previously worked with K-9 units. In October, Bates, who is on DeMarco’s team, was paired with Leo.

Leo truly is the K-9’s name — it does not stand for “law enforcement officer.” According to DeMarco, it is considered bad luck to rename a dog, and that’s the name he came with.

Capt. Jay Hart and Lt. Eli Shaivitz of Wellington worked with Village Manager Paul Schofield to bring a canine team to the area. “Traditionally, the introduction of a police canine into a community will help to reduce crime and criminal activity within that community,” Bates said.

Bates believes that the new PBSO dog will help the agency provide effective and efficient law enforcement in Wellington.

“This will include searching for criminals, searching for missing children and people, as well as conducting narcotics-related searches,” Bates said.

Bates and Leo are working on a 400-hour patrol academy to prepare them for situations they might encounter on the street, as well as a 320-hour narcotics detection academy. Leo is working hard to become an effective tool for the PBSO in searching for illegal narcotics.

For example, Bates said, a canine, or, in this case, Leo, would be sent instead of deputies to search a building that has been burglarized.

Bates and Leo will be seen out and about in Wellington, where Leo will help search for criminals, missing people and for illegal narcotics.

Having a K-9 unit is an advantage to Wellington, Bates said, noting that some of the benefits of utilizing a canine include an instant response for a canine search team regarding the search for criminals, crimes in progress, to search for missing people and for drug searches.

“The Village of Wellington is a very safe community, which is a direct result of the public officials in Wellington taking a proactive approach to reducing crime,” Bates said.

Bates credited the leaders of the substation for getting the K-9 unit up and running.

“The Wellington public officials, as well as Capt. Hart and Lt. Shaivitz, recognize how valuable police canine teams are, and they worked in partnership to facilitate this new canine team to work exclusively in Wellington,” he said. “The long-term goal is for the canine team to be a deterrent to criminals, and hopefully criminals will avoid the Village of Wellington and conduct their illegal business elsewhere.”