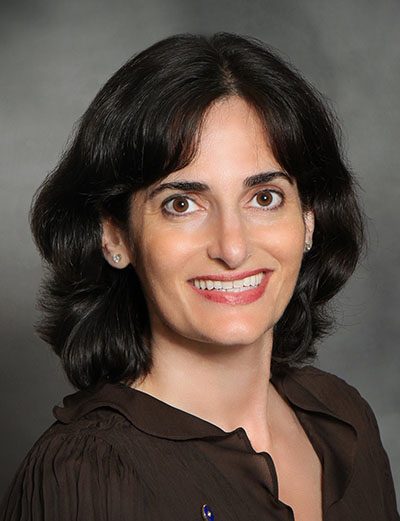 Smith recently sat down with the Town-Crier to discuss her goals should she be elected to the council on Tuesday, March 15.

“I was involved in the community prior to moving out here through the Central Palm Beach County Chamber of Commerce and fell in love with the area and moved out here,” she said.

Smith earned a degree in marketing from Barry University. She worked in marketing with various sports teams and later ended up in Wisconsin working at the BMO Harris Bradley Center. Prior to moving to Royal Palm Beach, she lived in West Palm Beach and helped her mother start an Edible Arrangements franchise.

Her top accomplishments include being a mother, raising a child in Royal Palm Beach. “Professionally, I was the third woman ever hired by the NHL as an off-ice official,” she said. “I was voted employee of the quarter when I was over with the Dolphins and employee of the month with the Panthers.”

She also worked with the Marlins before going to the NHL.

“I was the first woman to chair the ambassador committee with the Northern Palm Beach County Chamber of Commerce, and I am currently the youngest chair for Women in Business,” Smith said.

In Royal Palm Beach, Smith has worked with the Central Palm Beach County Chamber, on the board and its economic development committee, where she brought the Buy Local program to the chamber. She is a founding member and current board member of the Western Business Alliance.

Smith currently has her own marketing firm that focuses on helping small businesses and nonprofits accomplish their goals while working full-time for HomeSafe, a nonprofit focused on child protection issues.

Also a past president of the Royal Palm Beach Rotary Club, Smith believes her skill set and accomplishments would be advantageous to the council.

“I believe I bring a different perspective to the council than is already there,” she said. “I’m heavily involved in the community. I’ve been supporting the local businesses that are here, small businesses.”

Smith believes that Royal Palm Beach needed the charter high school that potentially could have been built near Royal Palm Beach High School and is concerned about what overdevelopment in the housing market will do to the current school system.

A charter school, she explained, would also help students who learn differently.

“I was on the talent supply and education pillar with the Florida Chamber — the six pillars — and that’s one of the things that focused on, where the direction our education is going,” she said.

Smith would like to see term limits for council members.

“Is eight years enough to get something done and accomplished? It certainly works on a national level, so can we do it on a local level? Is a shorter term better for what we’re doing in the village?” she asked.

Other goals include having more options for the local senior population and focusing on small businesses. For example, signage is a problem for small local businesses that have to have someone on the street corner flashing signs to attract patrons. Large companies seem to be allowed larger signage, she explained.

Her approach would be to provide the same opportunities to smaller companies that are provided for large companies.

A top issue in her campaign is transparency, Smith said. “If you have agreements or deals being made behind closed doors that the general public doesn’t know about, I think that’s an issue,” she said.

For example, there was more public awareness about plans to connect Madrid Street to the State Road 7 extension than there was over plans for the RaceTrac gas station. “The only reason why RaceTrac received the attention that it did, was based on that there were a couple of people who found out about it and said, ‘Whoa, wait a minute. Everyone needs to know about this,’” she said.

The council’s vote in favor of RaceTrac causes concern for Smith.

“My thought is not so much whether it was the right decision to do or the wrong decision to do, but why it seemed to be a back-alley deal,” she said. “My concern is the process that was gone through.”

If the residents of RPB wanted it there, she said, it should be there. If residents of other municipalities were for it, they should not have been taken into consideration, Smith explained.

When asked about the job that Ray Liggins does as village manager, Smith said he seems competent, from a resident’s standpoint.

“However, I do not review him as a staff member as I would when I’m elected,” she said. “I’ve seen him out in public; he seems very personable. As far as his job duties and his title, he seems to be doing the job that he’s hired to do.”

While there is opportunity for public input at council meetings, Smith said that the public input isn’t always respected.

Regarding traffic problems in the village, Smith expressed frustration as a resident about having to stop at every street light. “The timing of the lights is a huge issue,” she said.

Smith said she is supportive of opening the Madrid Street connection to SR 7. The last time the issue was discussed, residents were divided on the issue and it stayed closed. Smith believes it needs to be brought up again.

Smith lives in La Mancha, and discovered that moving from her home to the corner of Okeechobee Blvd. and SR 7 takes 10 minutes. If Madrid were open, it would take her three minutes.

Commons Park has had traffic issues at major events because there is one way in and one way out, which Smith said is a common issue in the sports industry. “The village does a good job of offering shuttle service,” she said, noting that residents who live nearby can also walk to the park.

Smith is a supporter of Royal Palm Beach’s park system, adding that’s why residents live in the community.

“Am I moving in because it is family-friendly, park-accessible and easy to maneuver, or am I coming in here because I want skyscrapers and fast-paced traffic coming through?” she asked. “I moved here because of the green space. I get more land for my money, and I have the option of walking to several different parks.”

Smith was curious about the many alterations on the Acme Ranches property along Southern Blvd. west of SR 7 and the village variances that were approved. With the smaller apartments, Smith wants to know how much they plan on renting the units for, and what the target demographic is.

While other candidates running say they were motivated by the RaceTrac issue, Smith said her reasons were not so specific.

“Running for office is not something that I take lightly,” she said. “I made the decision to run based on the issues that I think we still need to work on in the village.”

RaceTrac, Smith said, has made her see a different perspective about transparency issues in the village.

“Not only do I pay taxes and live in the village, but I pay the salary of the council,” she said.

Smith tried unsuccessfully to get on the council four years ago. Now, she thinks she has a better chance of winning.

“I think the residents and the fact that the council has continued in the direction that they’re going in has now really agitated people,” she said. “When I was a board member of the Central Palm Beach County Chamber, the village had granted the chamber $5,000 for an art and music festival. At the last minute, the village said, ‘No, we’re not going to give it to you.’ That money was to pay for security and things that they needed, plus it was a village event.”

With several seats to choose from, Smith chose to run against Valuntas because she feels that he has been there too long.

“This would be his fourth term. After six years, thank you very much. We appreciate your service to the village. Let’s get some new blood up there and some new perspective,” she said.

She noted that grouping her with Seat 1 candidate Lenore White and mayoral candidate Martha Webster as a slate is something that is expected.

“It’s easy to group us together, but it’s also easy to group the three gentleman together who tend to vote the same way, tend to listen to the same things, and tend to react the same way,” she said. “It’s just another tactic to take, and it depends on who wants to spin it.”

Smith lists her strengths as her ability to compromise and negotiate, taking on the role of mediator, and her ability to try to accommodate multiple people with different visions and perspectives.

Her weakness, she said, is that she is not a politician, noting that you can tell the difference between a career politician and someone who wants to create change and then leave the political realm.

Valuntas’ top strengths, she said, are his education. “He’s a very talented lawyer and he is a very nice person,” Smith said. “His weakness is that I don’t believe he is in touch with the residents. I don’t think he has enough community involvement.”

When asked why voters should choose her, Smith said it is because she is there to represent the residents of Royal Palm Beach.