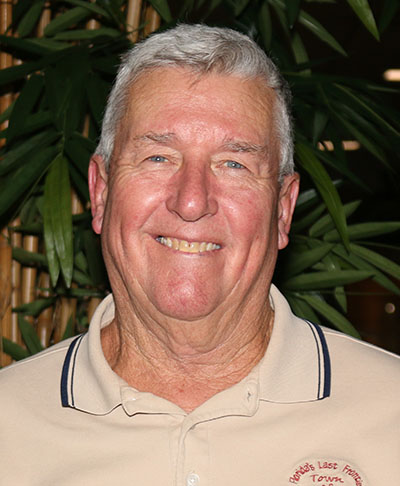 Dave Browning, who has served as mayor of Loxahatchee Groves since the town’s incorporation, is being challenged for Seat 4 on the Loxahatchee Groves Town Council by community activist Thais Gonzalez. The election will be held Tuesday, March 15.

Browning recently sat down with the Town-Crier to discuss his record on the council and his goals for the future.

Browning served 11 years on the Loxahatchee Groves Water Control District Board of Supervisors before the town incorporated. In 2007, he ran for a seat on the inaugural town council and has been re-elected ever since.

Loxahatchee Groves does not have a directly elected mayor. The ceremonial title is chosen annually from among council members. Browning has held the title for the past nine years.

Browning believes that he is the best candidate for Seat 4 because of the time he has lived in the community and his long years of experience. He and his wife, Sharyn, built their home in Loxahatchee Groves in 1979. Aside from his time on the LGWCD board and on the council, he also spent several years as president of the Loxahatchee Groves Landowners’ Association.

“Besides experience, I’ve built a lot of relationships over the years, whether it’s with county staff or county commissioners, and things like that benefit our town,” he said.

Browning lists his top accomplishment as slowing down growth in the town and keeping it as rural as possible.

“Hopefully, I’ve slowed down the urbanization that happens typically in the rural areas of South Florida,” he said.

He thinks the top issues this election are horse trails, roads and pulling the community back together after a divisive year.

“We’ve been pretty well split up,” he said. “On the horse trails, we are finally in the process of getting the rights-of-way worked out with the water control board. A lot of people did not understand that dynamic. They thought we could walk in and, with the stroke of a pen, establish the horse trails. It comes down to ownership and control. Now that we’ve been a town for almost 10 years, we are able to come in and get some legislation to help us use those rights-of-way.”

In a recent referendum, a majority of residents indicated that they wanted their roads paved, but did not agree how to pay for it. “The 70 percent who wanted it did not want to pay for it,” Browning noted.

There are still a lot of hard feelings over the 2015 election, he said, when it was discovered that absentee ballots were sent to voters who did not order them.

“There are feelings of animosity toward the water control board,” he said, explaining that four of the five LGWCD supervisors are elected by acreage, not popular vote. “Because of the different voting system, there is a lack of trust.”

In general, he believes that the town provides the basic services that residents want and does not want to see a major increase in town services.

“When I moved out here, brush fires were an issue, and now we have fire hydrants that are able to refill the trucks along North Road, Okeechobee and Southern, so you don’t have to go to a canal and drop the line in and try to pump it up,” he said. “I’m not a big fan of city water and city sewer. I think we have what we need out there. Most of us who live out here understand it’s not a city.”

There has been discussion of having a public equestrian facility, Browning said, and that falls in line with the major recreation project already in the works. “That’s why we’ve been working hard on the trails,” he said.

Road improvements should include some type of dust control, whether chemical stabilization or paving, Browning said.

“Sometimes there is the law of unintended consequences,” he said. “When I first moved out, there were horses on the road. Now it’s more and more OGEM [paving]. We seem to get more and more traffic. That has driven us to get more of the roads stabilized or OGEM put down because of cut-through traffic. I think, ultimately, all the roads will have some type of paving material.”

Although residents have indicated that they do not want to pay for paving, Browning said that the town does get gas tax revenue from the state, and he thinks that the time is close for the LGWCD to become a dependent district, and then the town will have access to some of its funds.

He pointed out that there are some who still oppose a dependent district and that it would require legislative action in Tallahassee.

Regarding the future of Okeechobee Blvd., Browning would prefer that it remain two lanes, but said it is sometimes difficult now to get out onto Okeechobee from the lettered roads.

Regarding development along Okeechobee, he noted that the town has always expressed interest in low-impact uses, with industrial and commercial uses along Southern Blvd.

“That is really what we’re working on right now,” he said, explaining that he tried to get the intensity on the Day property at Okeechobee Blvd. and Folsom Road reduced from what the applicant had originally requested, under pressure of a lawsuit. “I’m looking for input from the people. I can’t sit here and say I want this and that and the other, but I am hoping that what develops along there will be neighborhood-serving.”

In general, Browning does not believe that the town needs more commercial uses. “We’ve got 3,000 residents,” he said. “I have heard almost no clamor for more businesses.”

He pointed out that the Day property will have several commercial uses, including a restaurant.

“[Day] is not going to be able to build as intensely as he wanted,” Browning said. “We eliminated two buildings from his site, so instead of five, I think he’s got three. I’m not against commercial, I just want to be careful.”

“He is getting things done, he is responding to the public, he is dealing with stuff,” Browning said. “We have had issues with code enforcement, and we’re trying to get that worked out, but I think Bill and Underwood Management are doing a great job.”

Browning said that he thought the recent request for proposals seeking a new management company was an unnecessary slap in Underwood’s face.

“I went on record saying so,” Browning said. “It was basically almost a lack of confidence, and he was doing a great job. It was not the first time that some of the same people pulled the same issue.”

He pointed out that one of the things Underwood guided the council through was purchasing the Central Palm Beach County Chamber of Commerce building to use as the new town hall, which he believes was a bargain for Loxahatchee Groves.

Asked about the town’s budget, Browning described it as a tool to help the council spend money wisely.

“I always want to keep a reserve because you never know if a disaster comes through,” he said. “I tend to be a fiscal conservative. I don’t want the government to grow and spend more and more money. I think that’s a danger, because if you do that, we become like every other town.”

Browning reiterated his goal to keep the tax rate and services low. “That’s why people moved out there,” he said, adding that he thinks the town is doing well contracting for police, fire and other services.

His vision for the future of the town is to keep it like it is.

“It would break my heart if Loxahatchee Groves became like every other town in South Florida,” Browning said.

Browning is seen as a swing vote on many issues, and he said he wants to represent all voters, not a specific group.

“Therefore, I’m going to listen to either side,” he said. “Most of the time, the truth and the practicality is somewhere in the middle.”

He pointed out that the town was very divided when it incorporated.

“Incorporation won by 80 votes,” Browning said. “There were feelings both ways. The water control board at the time was very much against incorporation, and the large landowners were against incorporation because they felt it would limit what they would be able to do with their land. On the other side were what tended to be the horse people and those who wanted incorporation to protect from the county coming in and basically approving anything that they wanted.”

Asked how the controversial 2015 election will color this election, he said it is difficult because it has not been finalized.

“Everything is still out there,” Browning said. “Rumors fly, everyone is taking two different sides, and it has never been put to bed. We’re still waiting on decisions from the Florida Department of Law Enforcement regarding that election. It’s something that needs to be healed in our town.”

Asked about who he is supporting in the other race on the ballot — Councilman Jim Rockett versus Todd McLendon for Seat 2 — he said he would keep that to himself. “I have always chosen not to take a side in other elections,” Browning said.

With the election taking place the same time as Florida’s presidential primary, Browning said that he expects larger voter turnout, but does not expect it to alter the outcome.

“I don’t fear it at all,” he said. “The majority of the people of Loxahatchee Groves know me, they know where I stand, and I believe I have earned their trust.”

At the same time, Browning said that he will not underestimate his opponent. “She is a lovely lady, and she’s got her agenda,” he said.

He characterizes his opponent’s top strengths and weaknesses as regularly attending meetings but not actively participating on boards or committees, nor having lived in the town for a long time.

“Her issue tends to be the horses,” Browning said. “They train polo ponies. The issues of Loxahatchee Groves are much broader than that.”

He said his own strengths are his experience and longevity in the town, and his ability to work with others.

Browning said that voters should vote for him because they know what they’re getting.

“They know me; my phone number hasn’t changed in 38 years,” he said. “They can call me, they can stop me on the road, and I try to be open to everybody.”