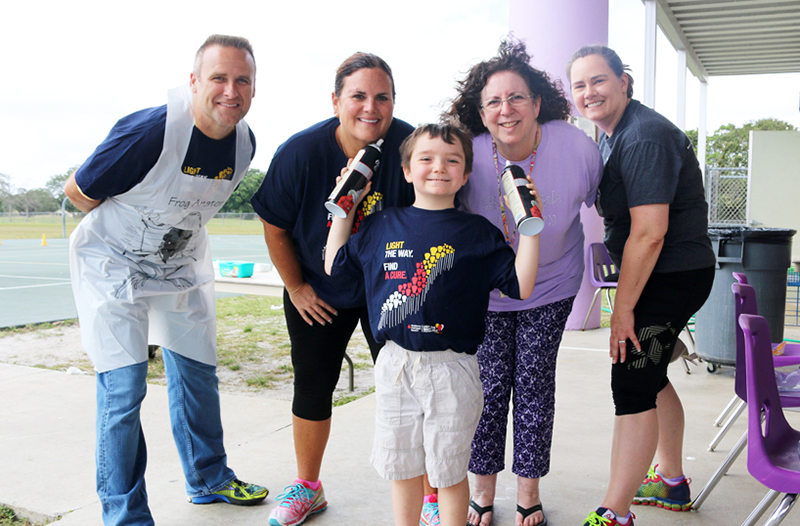 Elbridge Gale Elementary School students (gently) smashed plates full of whipped cream into the faces of teachers and administrators (some are parents, too) in a fundraiser for the Leukemia & Lymphoma Society on Friday, March 11.

“This is the second year that we’ve done this,” said Nicole Martinez, guidance counselor at the Wellington school. “We all rally to support this cause.”

Events such as “Pi Day” help to brighten the future of what has been a dark past. School support for the fight against leukemia began when student Sebastian Sarmiento was diagnosed in 2007. He died two years later.

Current first-grader Andrew Dawson recently finished the maintenance phase of his chemotherapy treatments for the disease and is in remission.

“We are raising this money for kids like Andrew,” Martinez said. “All of the students are very supportive of this fundraiser.”

Pi Day, along with the Pasta for Pennies program, which is presented by Olive Garden, help raise money for the LLS and bring the school together.

Last year, Elbridge Gale students raised more than $17,500. This year, the school has set a goal of $25,000 and is already more than halfway there, with about $13,000 raised and the mid-April deadline looming.

The school’s older students set up lemonade stands, hand out fliers and go door-to-door, with parents for security, Martinez said. She gave the students credit for their hard work in reaching the school’s goals.

Students donated $10 for the chance to get the adults — clad in goggles, smocks, ponchos and even nose plugs — smeared with whipped cream donated by Chick-fil-A. For $20, students were able to go after Assistant Principal Chad Phillips. And, for the biggest donors, a $30 donation gave students a chance to go after Principal Gail Pasterczyk.

Last year, the school raised about $3,000 at Pi Day. This year, almost $5,000 was raised. Almost half of the school’s students participated this year, up from 30 percent last year.

“I think the kids who didn’t do it last year and got to see everyone else having fun made sure that they were a part of it this year,” Martinez said.

Phillips’ daughter attends the school and created her own personal fundraising web site.

For Pi Day, he said, she couldn’t decide which teacher to hit with a pie. Eventually, she chose her dad, who was a good sport about getting messy.

“I don’t think that they enjoy too many other things as much as they look forward to Pi Day,” Pasterczyk said. “I love to see the smiles on their faces that this brings, and the laughter. There’s just nothing like it.”

The parents have been supportive of the school and its endeavors.

“We just finished our big school PTO fundraiser, and to be able to bring in this much money right after a huge fundraiser is phenomenal,” Pasterczyk said.

Stacy Hewitt, campaign manager for school and youth programs at the local LLS chapter, is thrilled with the hard work that everyone at the school has contributed to help fight cancer.

“It’s really great because the school has been affected twice by students with blood cancer. One student passed away many years ago, and they have a survivor, Andrew, who is in first grade,” Hewitt said. “The kids are raising awareness, they are showing support for friends, and there are students who have parents and grandparents who have been affected. So, it’s a really great way for them to show compassion toward others.”

The school, she said, was the top fundraising school in Florida last year, and the goal is to do that again. When the school reaches its goal, it will be connected with an LLS-funded research portfolio, where the school will be given a plaque and updates as researchers work to find cures to help survivors. “It’s kind of like the research is in their honor,” Hewitt said.

To facilitate the fundraising efforts, the school will also be holding chess tournaments, a parent date night, and, during spring break, many students are doing community service projects and their own fundraisers.

The school’s top student fundraiser is fifth-grader Jaidyn Brody. With a personal cumulative goal of raising $15,000, Brody has raised about $4,000 this school year alone, bringing her total to approximately $9,000.

The top fundraising students will have the opportunity to celebrate at Olive Garden, Hewitt said, noting that the Wellington Olive Garden lost a staff member to cancer a few years ago.

To donate to LLS on behalf of Elbridge Gale Elementary School, visit www.studentseries.org/pb and search for Elbridge Gale.