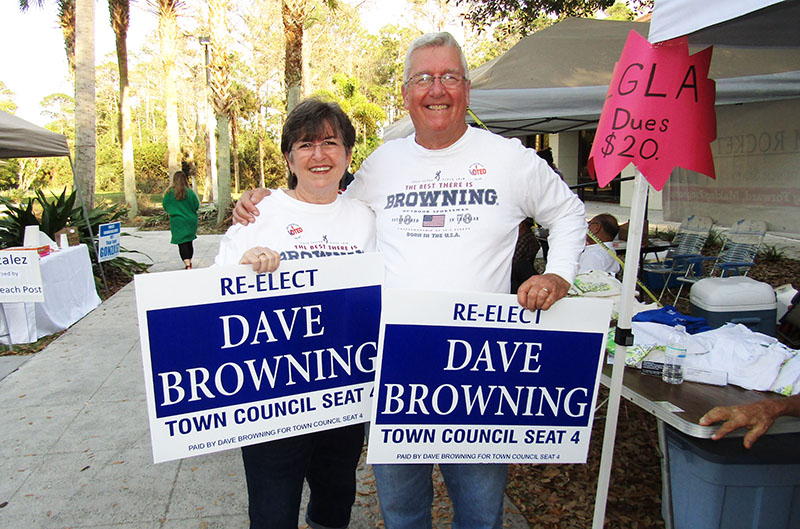 McLendon said the win was particularly gratifying after he narrowly lost to Rockett three years ago.

“It’s fantastic,” he said. “It feels better winning this time after the loss last time. They say you don’t appreciate winning unless you lose. There’s 395 people who didn’t vote for me, and I hope I exceed their expectations, and next time they vote for me.”

With McLendon on the council, he said he thinks proceedings won’t be as divisive as in the past, and hopes that Vice Mayor Ron Jarriel, who supported Rockett in the election, will be willing to work with him as a team.

“I hope that is what happens,” McClendon said. “I hope that he can put his personal differences aside and work as a council to get things going for Loxahatchee Groves, and I think he’ll do that.”

He said there are small charter issues that need to be addressed.

“It doesn’t say that it’s mandatory to put together a town charter committee, but I think it’s time to do that and try to iron out some of these small flaws in the town charter, and move on from there in fixing the comp plan to preserve and protect Loxahatchee Groves, which is what the original intention was with incorporation,” McLendon said. “There’s definitely some mistakes made along the way, which is to be expected with a new town. I hope we can start fixing those mistakes and learn from them moving forward.”

McClendon said that a long-term solution to road maintenance is needed.

“I think a majority of the people are fed up with the dirt roads,” he said. “They’re fed up with the drainage. We need to think seriously about fixing those issues. It’s not cost-effective to grade these roads like the water control district did for 100 years. It’s more likely going to cost more money moving forward having a private contractor do it.”

He believes that the long-term goal should be to improve the roads. “It’s going to cost us more up front, but in the long run, it’s going to be worth it,” McLendon said.

He hopes that the council can keep Underwood Management Services Group on board as the town management firm. Underwood has had a contentious relationship with Rockett.

“I’m hoping to get some things accomplished that had not been before,” he said, explaining that all the roads need to get turned over to the town from the Loxahatchee Groves Water Control District. “We need to get all the ULDCs [Uniform Land Development Codes] straightened out. We need to get a code enforcement company back on board so we can enforce those codes.”

Browning said he was happy to win a fourth term in his council seat. He said he would be willing to serve again as mayor if he is appointed by the council.

He said the biggest change on the council will be support for the management team.

“Todd has already expressed that he is supportive of Underwood Management, and you know that I am,” Browning said. “I think that will be the most obvious. I think there will be a little less contention.”

Browning said he believes that his re-election confirms the direction that the town has been taking. “I think people appreciate what I bring to the table, the calming factor and the experience,” he said.

The mayor said the council has a lot of things in the works, including the B Road paving project. “I think the people, for the most part, like what we’re doing,” Browning said.

Browning said that the council has dedicated about $1 million to improve the roads, which he thinks is the residents’ priority currently.

“I think that’s going to be the next thing,” he said. “When we do that, I think there will be a lot of people pleased with that, so that seems to me to be the top issue right now.”

He said the council will be working with Palm Beach County to control the widening of Okeechobee Blvd. and come up with a design that will protect the town and its residents.

“I’ve got some ideas that we need some narrow lanes,” Browning said. “We want to keep it as underused as we can.”