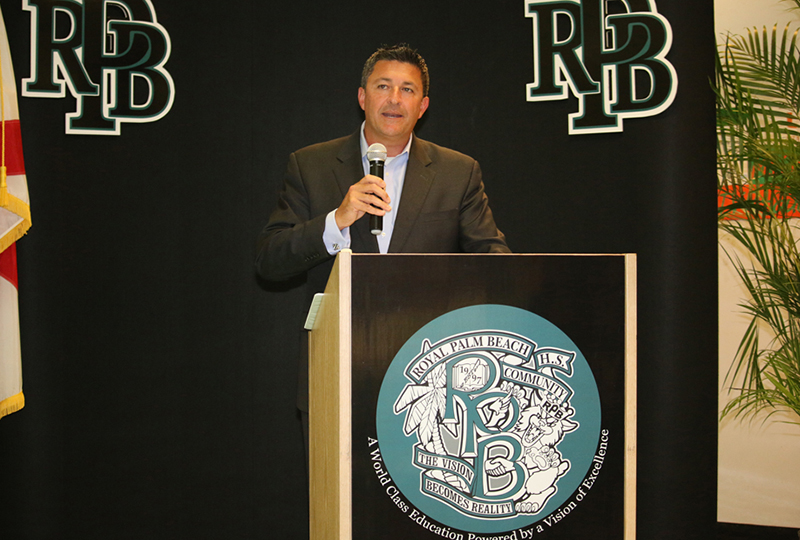 Avossa took to the floor after being introduced by District 6 School Board Member Marcia Andrews.

“Thank you all for being here,” Avossa said. “We spent a lot of time in the community. We talked with 17,520 people during this process. Face to face, large groups, small groups, medium groups. Just when we thought we had heard enough, we went back and did another round, to make sure that when we talk about success in Palm Beach County, that we’re measuring it the way that people think is important. Whether it’s arts, it’s athletics and most importantly, academics.”

Some of the strategic themes the district is focusing on include a high-performance culture, talent development, effective and relevant teaching for all students and their needs, and a supportive and positive climate.

Avossa showed a picture of a classroom at Military Trail Elementary School in 1965 and explained how the classroom had no diversity, the class size was large, the desks were in tidy rows and there was minimal testing.

It used to be that with a high school diploma, graduates could raise and support a middle class family. However, that is not the case today. Changing to accommodate the needs of today’s children is necessary, Avossa said.

Attaching a high school diploma to certificates and industry certifications, he said, perhaps a college degree, will help students after high school.

Of the third-graders in the district right now, 50 percent are reading on grade level, he said.

Investing in students in the front end, with pre-K, is more advantageous than remedial work later, Avossa said, explaining that helping students beforehand will be more effective.

“How can we be in this country and then ask teachers to take these kids that are all over the map, and expect a miracle to get them all ready for first grade?” he asked.

Teaching through play, Avossa said, is a way to get through to children, and all children, regardless of their demographics, should be learning.

“Since when has being poor made your destiny? It doesn’t, and it shouldn’t,” he said. “We need to stop making excuses and saying that poverty somehow is going to be your destination. It is not.”

Eighth-grade middle school students with less than 10 absences graduate high school at an 85.8 percent rate. Among those missing 11 to 20 days, the rate of students graduating from high school drops to 72.1 percent. Twenty-one or more absences drops the number to 53.3 percent. Of the students in the group studied, 1,900 students missed 15 days of school.

A cycle is being perpetuated where if students don’t come to school, they can’t be taught, Avossa said.

“We cannot be a world-class school system if we do not address behavioral issues, and those 19 initiatives, each of them are tailor-made based on the data we have found,” Avossa said.

Of seniors leaving high school, 68.7 percent of students go directly to college. That number worries Avossa, because the data doesn’t show yet how many of those students complete college and how they do after college. “Are we setting up a false dichotomy, where students are told that the only way to be successful is to go straight to college?” he asked.

Only approximately 55 percent of the students who showed through testing that they should take advanced classes did so out of 12,753 students.

Teaching students through their passions is a way to reach the students, he said, explaining that kids want to know how lessons are relevant to their lives.

Anti-bullying programs are imperative, Avossa explained, because children should feel safe at school, and bullying is prevalent everywhere.

Offering better compensation to teachers and providing a career path is a method of keeping the best teachers in the classroom, he explained, pointing out that teachers are getting a 3 percent raise.

Avossa’s next stop on his community tour is Park Vista High School on Tuesday, April 5 at 6 p.m. For info., visit www.palmbeachschools.org/strategicplan or text “PBCStrong” to 82257.