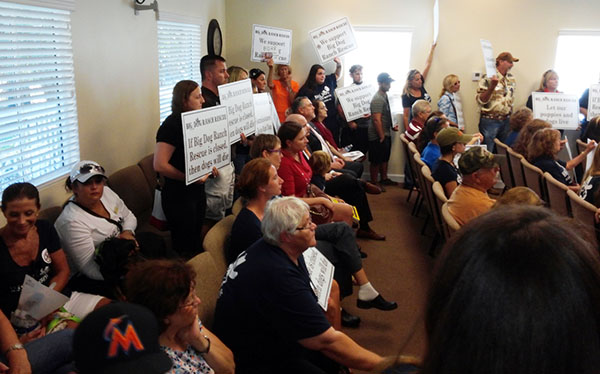 Before an overflowing crowd of Big Dog Ranch Rescue supporters, the Loxahatchee Groves Town Council on Wednesday agreed to hold a closed-door meeting with representatives of the local nonprofit.

The meeting was set to be held Thursday, but results were not available at press time.

Wednesday’s meeting was the latest chapter in a week-long saga that began when the town threatened to shut off power to the 33-acre Big Dog site, which is under construction at the corner of Okeechobee Blvd. and D Road, if it did not cease housing dogs in a trailer on the site, which is a code violation.

Big Dog officials, who had to vacate their previous property last month, argue that the approximately 50 dogs housed in the temporary accommodations are too ill to be in foster homes.

Further, Big Dog officials hold the town responsible for the delays in constructing the new, permanent facility. Town representatives counter that the nonprofit had unreasonable expectations about how long the project would take.

When the council refused to allow the trailers last week, attorneys for Big Dog filed suit and won a temporary restraining order to keep the lights on.

Although public comment was allowed at Wednesday’s emergency meeting, many people wanted to speak about Big Dog itself, but the agenda was restricted to the sole item, whether or not to hold a closed-door shade session in accordance with a state statute that allows the mayor, council and manager to meet in a closed-door attorney/client session to discuss strategy related to litigation.

“We’re here for one limited issue, whether to publicly request the town council to hold a closed-door attorney/client meeting,” said Mayor Dave Browning, who explained that Big Dog has sued the town regarding the trailer issue.

The court order issued last week maintains the status quo and requires the parties, including the town, to pursue settlement of the suit in a timely fashion. Prior to engaging in expensive litigation, the parties have begun those efforts, including mediation earlier this week.

“There are lots of people with strong feelings about the issue, particularly as to the well-being of the dogs,” Browning said. “We’re there with you. If you wish to speak tonight, understand that the town and Big Dog are engaged in discussions to try and resolve this dispute, and the town will not be commenting tonight on the allegations of the lawsuit.”

Limited to the agenda item at hand, the people who spoke were unanimously in favor of the shade meeting, although they encouraged the council to make a decision that would be to the benefit of the dogs.