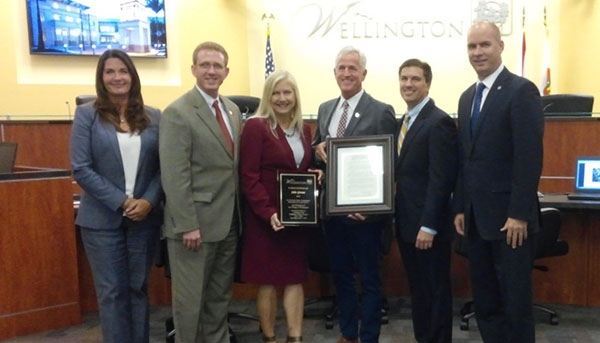 The Wellington Village Council thanked former Vice Mayor John Greene last week for his four years of service on the council. He was honored as an advocate for education, crime prevention, fiscal responsibility, job creation and greater transparency in government.

Greene was elected in 2012 but lost his re-election bid March 15 to Councilman Michael Drahos.

Greene was presented with a proclamation that read, “He worked hard to ensure responsible growth and to preserve and protect the character of the village’s neighborhoods. John Greene made significant decisions while serving on council that helped shape the Village of Wellington, some of which included the Lake Wellington Professional Centre, the construction of the new tennis facility, as well as the construction of the new Wellington Community Center.”

Greene said that he was honored by the proclamation.

“I’m very proud of this service, of the work I did here,” he said. “I had great colleagues. I want to thank Matt Willhite, the councilman I served with over the past four years, and I’m proud to be back in this building. I wear my Wellington pin proudly. I’ll continue to call Wellington my home.”

Current Vice Mayor John McGovern said serving with Greene had been a pleasure.

He also lauded Greene as an advocate for public safety.

“The residents should not forget that you were always a champion for safety, whether it was the PBSO or fire-rescue, and it was always to maintain this community feel,” McGovern said.

He also credited Greene for his work on the village’s solid waste contract, which resulted in significant savings for residents, and his support for schools.

“Thank you most of all for your children, who allowed you to serve for the time that you did, because this is clearly a family effort, and it does take a village,” McGovern said.

Drahos, who defeated Greene, said he respected Greene for his gentlemanly conduct during the election, even through hard-fought debates.

“We sat side-by-side under very difficult circumstances, and it was awkward at times, but I shook your hand before every debate, and I thought we both conducted ourselves with each other like gentlemen,” Drahos said. “Although we had some differences from time to time on policy, certainly we are very similar in the sense that we love our town and we believe in the importance of community service.”

Councilman Michael Napoleone, who replaced the term-limited Willhite on the dais, noted that he had observed Greene at work.

“I got to observe you on the council, and whether you were agreeing or disagreeing with other people, you always had the best interest of everyone at heart,” Napoleone said. “You did this for the right reasons, which is admirable. Not everyone who runs for office, these people excluded, run for the right reasons, and I think you really did this because your heart is in Wellington, and you served well for four years.”

Mayor Anne Gerwig, who was often at odds with Greene while they were on the dais together, thanked him for his service.

“We didn’t agree very much, and there were some sparks in the process, but I do appreciate the time that you spent here and the work that you put in,” Gerwig said. “If there’s anything you think that we need to hear, especially from your professional service now, please, my door is open.”

Greene, who now works in real estate, also recognized Village Manager Paul Schofield and his staff for their work.

“People who watched us over the last four years recognized that from time to time we had our differences, but you always treated me with respect, and I think that we always had that respect between us,” Greene said. “The one thing that you miss when you are no longer in office is the amazing people who make this village happen. It’s not just the people on this dais, it’s the men and women who are out there making this the best place in Palm Beach County to live and raise our families.”