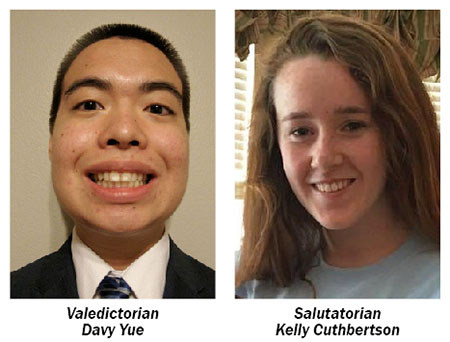 Wellington High School seniors will cross the South Florida Fairgrounds stage at their graduation ceremony set for Wednesday, May 25 at 4 p.m. led by valedictorian Davy Yue and salutatorian Kelly Cuthbertson.

“Having worked so hard for the last four years to reach this point, that is the highest honor at my school,” Yue said. “I feel sort of relieved that it’s almost the end of these last four years — this section of my education at high school — and it gives me motivation to look ahead to college at Vanderbilt University and do even better.”

Yue, 17, will be majoring in computer science, because of his interest in the ability to simplify tasks through computer programming.

He found out that he was first in the class when Principal Mario Crocetti came into Yue’s English class and announced that he would be the valedictorian. “I was kind of expecting it, because the week before or so, I submitted my final grades for AP Literature,” he said.

The final Advanced Placement class, he said, was something that might have pushed him from second in the class to first. His grades, just before graduation, were a GPA of 3.9 and an HPA of 5.3.

“My parents were ecstatic,” he said.

Yue’s graduation speech was written weeks ago, with both popular culture references and special memories and topics that were discussed at school, along with inspirational future thoughts for the class.

“It’s a deviation from the common, cliché-filled speech and is humorous and really relatable,” he said. “I’m really excited to give that speech.”

During his sophomore year, Yue discovered a passion for origami, where he transforms a flat piece of paper into a three-dimensional object such as a swan, box or flower. He founded, and was president of, the school’s origami club, where he taught students about the craft and was able to foster his own interest.

“It was, and still is, a very thrilling experience that I think is one of the biggest accomplishments that I’ve done,” he said.

One of Yue’s fondest memories was Wellington High School’s chalk art festival, where he filled a 4-foot by 6-foot space with chalk artwork. He drew a sea turtle, finishing within the four-hour time frame.

He was one of the three winners for the people’s choice award and the artists’ choice award. “It was very thrilling and a very interesting experience,” Yue said.

For other students who would like to be in the top of their class, Yue suggests they never give up.

“Be able to take a challenge, and being able to see that not just as an obstacle, but for an opportunity for you to develop what you know, and take any failures and any hardships and use that as knowledge to support you in going even further than you have before,” he said.

In the future, Yue aspires to be a software engineer working at Google.

A GPA of 3.9 and an HPA of 5.2 secured Cuthbertson the salutatorian title.

“It’s exciting, but a little nerve-wracking, because I have to write a speech and speak at graduation,” she said.

Cuthbertson, 17, found out at the end of February when she went to her guidance counselor for a copy of her transcript for college applications. “I was really excited. I’ve worked hard the past four years, and I think it’s a cool accomplishment,” she said.

Her parents were proud, but tend to focus more on personal betterment than grades and awards.

With graduation less than two weeks away, Cuthbertson is excited for the future.

“I’m excited to be with all of my friends and family at graduation and to move on to college,” she said.

The University of North Carolina at Chapel Hill will have a new biology student in Cuthbertson, who enjoys science and might wind up on a pre-med track.

Cuthbertson served as band captain of the Mighty Wolverine Sound, was a cross-country runner and part of the Pine Jog Environmental Education Center’s fellowship program at Florida Atlantic University. She has participated in many programs and had numerous memorable experiences throughout high school. One of those was “Save the Pulp,” an initiative to enrich the lives of farm animals and help the environment.

“Playing in band these past four years with all my friends is probably one of my fondest memories,” she said.

Cuthbertson suggested that other students who aspire to be at the top of their class work hard, but also have fun and enjoy their four years of high school.

“At the end of the day, it’s not that important,” she said. “What’s important is having fun with your friends and enjoying the freedoms and things that come with being a high school student.”