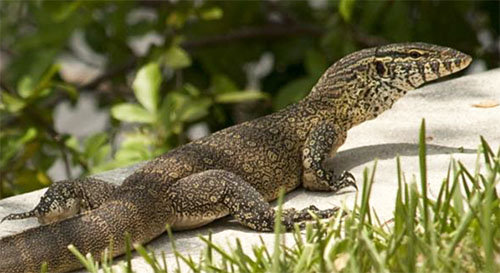 University of Florida Professor Frank Mazzotti gave a presentation to the Wellington Village Council on Tuesday regarding the encroachment of Nile monitor lizards into Florida, including a growing presence in Wellington.

Native to Africa, particularly Sudan and the central portion of the Nile River in Egypt, Nile monitors have been spotted in significant numbers along the C-51 Canal. Some have also been seen in Wellington.

“Burmese pythons have gotten everybody’s attention and become the poster child for the problem. However, this is the new bad actor on the block, and it is right in your backyard,” Mazzotti said. “This is the Nile monitor. It is a large predatory lizard. It regularly gets to be three to four feet in length. Large ones are five to six feet in length. Similar in size to alligators, they are similar in habits to alligators. When a hatchling is born, it is already larger in size than our native species of lizards.”

Well over 300 have been found in the Cape Coral area, but the next largest concentration is in the West Palm Beach area along the C-51 Canal.

“By the end of the year, well over 100 Nile monitors will have been removed from West Palm Beach,” he said. “Most of them that have been removed are from the C-51 Canal right along the northern boundary of Wellington, and a couple of them have popped up in the Wellington area.”

Mazzotti said the Nile monitor is a direct threat to native species and pets.

“They eat a lot of pretty much everything,” he said. “The joke is, ‘What do they eat?’ The answer is, ‘Whatever they want.’ However, they eat a lot of native species of reptiles and amphibians. They join the Burmese python in being a really voracious predator of our native animals, and they are a direct threat to our Arthur R. Marshall Loxahatchee National Wildlife Refuge. They are really more of a threat to pets than they are to humans. If you corner one, they can be very defensive, and they are well-equipped to be defensive. They have sharp teeth, long claws and a whip-like tail.”

Mazzotti said they have also been observed in the Southwest Ranches area in Broward County where they frequent stables.

“A lot of people have described encountering Nile monitors in their horse paddocks, one of them describing their dog in the paddock being knocked into the air by the tail of the Nile monitor, so pets really are our primary concern,” he said.

The University of Florida has teamed up with other agencies, such as the U.S. Fish & Wildlife Service, which is concerned about the refuge, to remove Nile monitors from the C-51 Canal, but they are concerned that the trapping activities there will cause them to flee into Wellington.

“They might not sit still as we are removing them, so we want to start a targeted outreach program,” he said. “If they are in Wellington, and someone sees them, we want to be contacted.”

Residents who see a Nile monitor are asked to take a picture, note the location and call the Invasive Species Hotline at (888) 483-4681 (“I’ve-Got-1”) to report their finding. “If someone is seeing them, we can remove them, and if they’re not here, and you don’t have a problem, that’s a good thing for you to know,” Mazzotti said.

Mayor Anne Gerwig said she saw a Nile monitor in the middle of Forest Hill Blvd. and called the village manager, before she was aware that a hotline was available.

“I think they took care of that guy,” Gerwig said. “He was stopping traffic. I know that one of our staff members also saw one recently.”

Mazzotti said any nonnative species that is trapped is euthanized. “It is illegal to re-release them anywhere in the wild in Florida,” he said. “This is a large animal that bites. It is not suitable as a pet.”

He said most of the nonnative species in Florida are a result of the pet trade.

“Whether they were released deliberately or escaped, it really depends on the species,” Mazzotti said. “We’re finding that sometimes the pet dealers have let these animals go deliberately in the hopes that they can go back, harvest them and sell them.”

ABOVE: The Nile monitor lizard has made its way to Florida and has been spotted in Wellington.